The newly minted presidential candidate is serving as a lightning rod for the debate about U.S. warmongering, writes Caitlin Johnstone.

When Hawaii’s Rep. Tulsi Gabbard announced her plans to run in the 2020 presidential election, I predicted that it would disrupt war propaganda narratives and force a much-needed conversation about U.S. interventionism, but I didn’t realize that it would happen so quickly, so ubiquitously and so explosively. Gabbard officially began her campaign for president a little over a week ago, and already she’s become the front line upon which the debate about U.S. warmongering is happening.

This dynamic became more apparent than ever in Gabbard’s recent appearance on MSNBC’s Morning Joe, hosted by spouses Joe Scarborough and Mika Brzezinski.

It should here be noted since we’re talking about war propaganda that in 2009 Scarborough turned down an easy run for the U.S. Senate because he decided that he could have more influence on public policy as the host of Morning Joe than he could as one of 100 U.S. senators, which tells you everything you need to know about why I focus more on U.S. mass media propaganda than I do on U.S. politics. It should also be noted that Brzezinski is the daughter of the late Carter administration Cold Warrior Zbigniew Brzezinski, whose influential ideas about U.S. world domination, arming extremist factions to advance U.S. interests, and hawkish agendas against Russia continue to infect U.S. foreign policy to this day. Mika is part of a political dynasty, with both brothers being U.S. political insiders as well.

So if you’ve ever wondered how outlets like MSNBC keep everyone on message and fully in alignment with the U.S. war machine’s agendas, there’s a good insight into how. Combine that with the way they stock their punditry lineup with U.S. intelligence community insiders and fire any pundit who refuses to toe the military-industrial complex line, and it’s not hard to see how they’ve developed such a tight echo chamber of hostility toward any resistance to U.S. interventionism. Which explains what we’re about to discuss next.

The journalist interrogating Tulsi seems to believe that US forces in Syria are fighting Assad. Tulsi corrects her, says those troops were deployed there to fight ISIS. These people don’t even know what’s happening in the places they want the US to occupy pic.twitter.com/YWIbSVqePA

“Do you think Assad is our enemy?” Hunt interrupted during Gabbard’s response to a question about her meeting with Syria’s president in 2017, her voice and face both strained with emotion.

“What do you say to Democratic voters who watched you go over there, and what do you say to military members who have been deployed repeatedly in Syria pushing back against Assad?” Hunt asked, somehow believing that U.S. soldiers are in Syria fighting against the Syrian government, which would probably come as a shock to the troops who’ve been told that they are there to defeat ISIS. 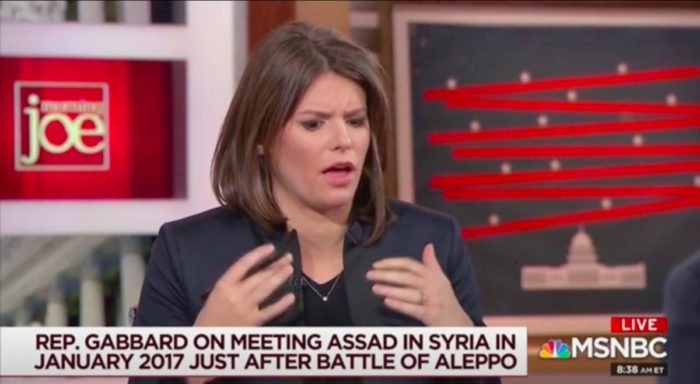 Journalist Rania Khalek summed up this insanity perfectly, tweeting, “The journalist interrogating Tulsi seems to believe that U.S. forces in Syria are fighting Assad. Tulsi corrects her, says those troops were deployed there to fight ISIS. These people don’t even know what’s happening in the places they want the U.S. to occupy.”

Journalist Max Blumenthal agreed with Khalek in a response to her tweet.

This is such an embarrassing look at the state of corporate American regime media. @kasie doesn’t know the most basic facts about Syria and along with the smug co-hosts, doesn’t care to learn. https://t.co/dEfJbVEcaD

And it didn’t get any better from there. After Gabbard took some time to explain to a professional cable news reporter the basic fundamentals of the U.S. military’s official involvement in Syria, Scarborough interjected to ask if Assad isn’t an enemy, would Gabbard at least concede that he is “an adversary of the United States.”

Scarborough and Gabbard went back and forth about this stupid, nonsensical question before Brzezinski interjected to ask “So what would you say he is to the United States? If you cannot say that he’s an adversary or an enemy, what is Assad to the U.S.? What is the word?” 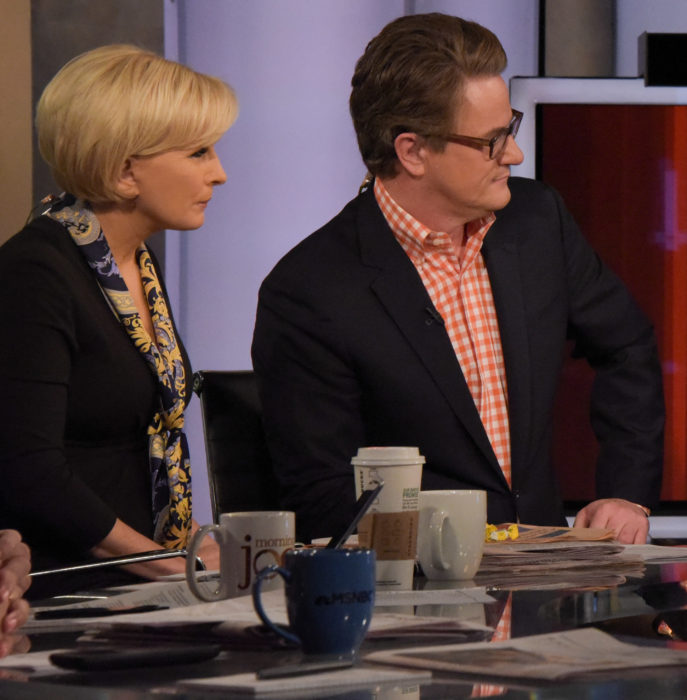 “You can describe it however you want to describe it,” Gabbard responded, explaining that whether a nation is adversarial or not comes down to whether or not they are working against U.S. interests.

“Are Assad’s interests aligned with ours?” asked Hunt.

“What are Assad’s interests?” Gabbard countered.

“Assad seems interested primarily in the slaughter of his own people,” Hunt replied with a straight face.

“Survival,” Scarborough interjected, trying to save his colleague some embarrassment with a less insane response to the question of Assad’s interests.

Other crazy questions Gabbard was asked during her appearance include the following:

“You know there are people who will watch this have heard your previous comments who will wonder, what’s going on here? Why you met with Assad, why it looks like you were very cozy with Assad and why you’ve sort of taken his side in this argument. What would you say to that?”

“Do you think that Assad is a good person?”

“Any idea why David Duke came out and supported you?”

“There have been reports that that Russian apparatus that interfered in 2016 is potentially trying to help your campaign. Why do you think that is?”

“Have you met with any Russians over the past several years?”

Gabbard shoved back against the various accusations of alignment with Trump, Putin and Assad, asserting correctly that those lines are only being used to smear anyone who voices an objection to endless war and insane nuclear escalations. She pushed back particularly hard on Kasie Hunt’s reference to the obscene NBC smear piece which cited the discredited narrative control firm New Knowledge to paint Gabbard as a favorite of the Kremlin, claiming that the article has been thoroughly debunked (and it has).

After the show, still unable to contain herself, Hunt jumped onto Twitter to share the discredited NBC smear piece.

Here is ?@NBCNews?’ excellent reporting on the Russian machine that now appears to be boosting Tulsi Gabbard https://t.co/QuJRuEQHOm

Hunt then followed up with a link to an RT article which she captioned with an outright lie: “Here is the ‘debunking’ of the NBC News report from RT, the Russian state media. You tell me which you think is more credible.”

I say that Hunt is lying because the RT article that she shared to falsely claim that the only objection to NBC’s smear piece came from Russia explicitly names an Intercept article by American journalist Glenn Greenwald, upon which the RT article is based and which does indeed thoroughly discredit the NBC smear piece. If Hunt had read the article that she shared, she necessarily would have known that, so she was either lying about the nature of the article she shared or lying about knowing what was in it.

MSNBC defended @nbcnews fraudulent "report" which was based on a "discredited cyber security firm recently kicked off Facebook for unethical MEDDLING of a state election.” Shameful "journalism." https://t.co/YjGSKKE6oR

So that was nuts. We can expect to see a whole, whole lot more of this as the plutocratic media works overtime to undermine Gabbard’s message in order to keep her from disrupting establishment war narratives, and I’m pleased as punch to see Gabbard firing back and calling them out for the sleazy war propagandists that they are. Her presidential campaign is shaking the foundations of the establishment narrative control matrix more than anything else that’s going on right now, so it looks like writing about these embarrassing mass media debacles she’s been provoking may be a big part of my job in the coming months.

Military interventionism is by far the most depraved and destructive aspect of the U.S.-centralized power establishment, and it is also the most lucrative and strategically crucial, which is why so much energy is poured into ensuring that the American people don’t use the power of their numbers to force that interventionism to end.

Anyone who throws a monkey wrench in the works of this propaganda machine is going to be subjected to a tremendous amount of smears, and I’m glad to see Gabbard fighting back against those smears. From personal experience I know that smear campaigns must be fought against ferociously, because the only alternative is to allow your detractors to control the narrative about you, which as far as your message goes is the same as allowing them to control you.

← THE ANGRY ARAB: Lebanon’s New Government Faces Old Overseers
The Real Motive Behind the FBI Plan to Investigate Trump as a Russian Agent →

112 comments for “Tulsi Gabbard Is Driving The MSM Crazy”