Interference by Gulf and Western governments in Beirut’s affairs has been increasing steadily, writes As’ad AbuKhalil for Consortium News.

After nine months of delays and political feuding, Lebanon finally has a new government.  The parliament will begin in a few days the discussion of the cabinet’s statement (which contains the program of the new government).

The news of the government’s formation was first announced by the UAE ambassador in Lebanon, which is significant because Western media coverage of Lebanon (which is entirely slanted to cover whatever is of interest to Israel) rarely entails discussion of the dominant UAE-Saudi influence and clout in Lebanon.

The Israeli narrative about Lebanon—to the effect that there is Iran and Hizbullah but no one else there—has prevailed in much of the Western coverage.  Lebanon, both in the past and today, is an arena of regional and international conflict, and the sectarian parties in the country attach themselves—since the 19thcentury—to this or that outside power. 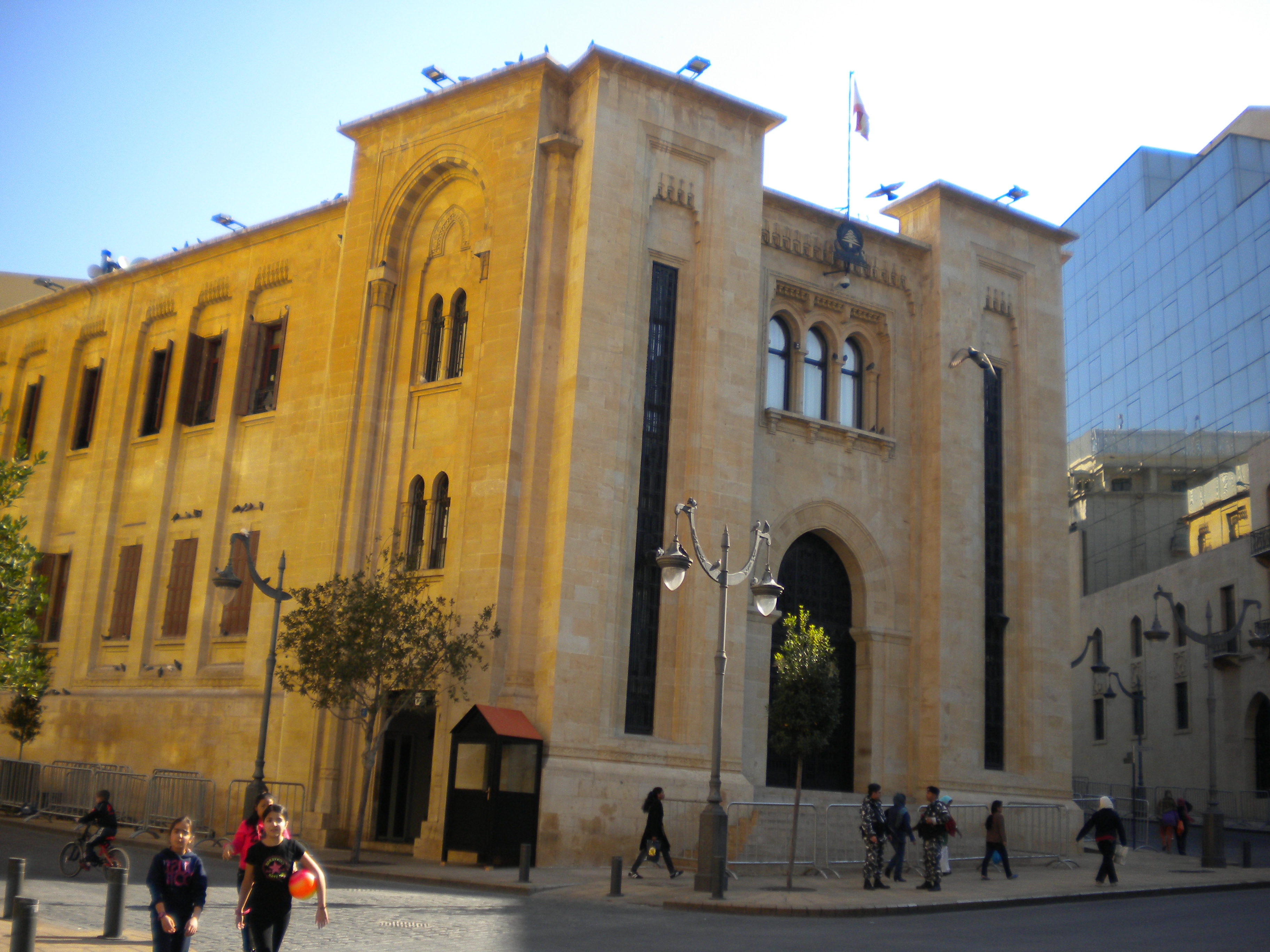 David Hale, the American undersecretary of state for political affairs, visited Lebanon in January to make clear that the U.S. would not tolerate a Hizbullah takeover of the Ministry of Public Health; or any service ministry for that matter.  Hale went further and indicated what the “kind” of government in Lebanon is of interest to the U.S. government. Such heavy-handed interference in Lebanese affairs does not cause much consternation among Western media and D.C. think tanks who are busy with Russian ads on Facebook during the last presidential election.

The formation of Lebanese governments has never been a domestic affair. But since 2005, when the Syrian regime was forced — by domestic and international pressures — to withdraw its troops from Lebanon (in the wake of the assassination of Rafiq Hariri), Gulf and Western governments have been steadily filling the power vacuum.

The U.S., for example, often has a say about ministers it trusts and approves of. The March 14 coalition — pro-U.S., pro-Saudi and comprising mostly rightist Sunni, Druze, and some Christian political forces in Lebanon — always took that into consideration. By the same token, the Syrian regime had its ministerial preferences.  But the role of Iran has been wildly exaggerated largely because the relationship between Hasan Nasrallah, the secretary-general of Hizbullah since 1992, and Iran is not a replica of the Saudi regime’s relationship with its Lebanese clients (or the relationship between the U.S. and its clients for that matter).

Sa`d Hariri, the prime minister, and Walid Jumblat, the Druze political leader and head of the Progressive Socialist Party who is notorious for his political oscillations and shifts, take orders from the Saudi regime and the U.S. 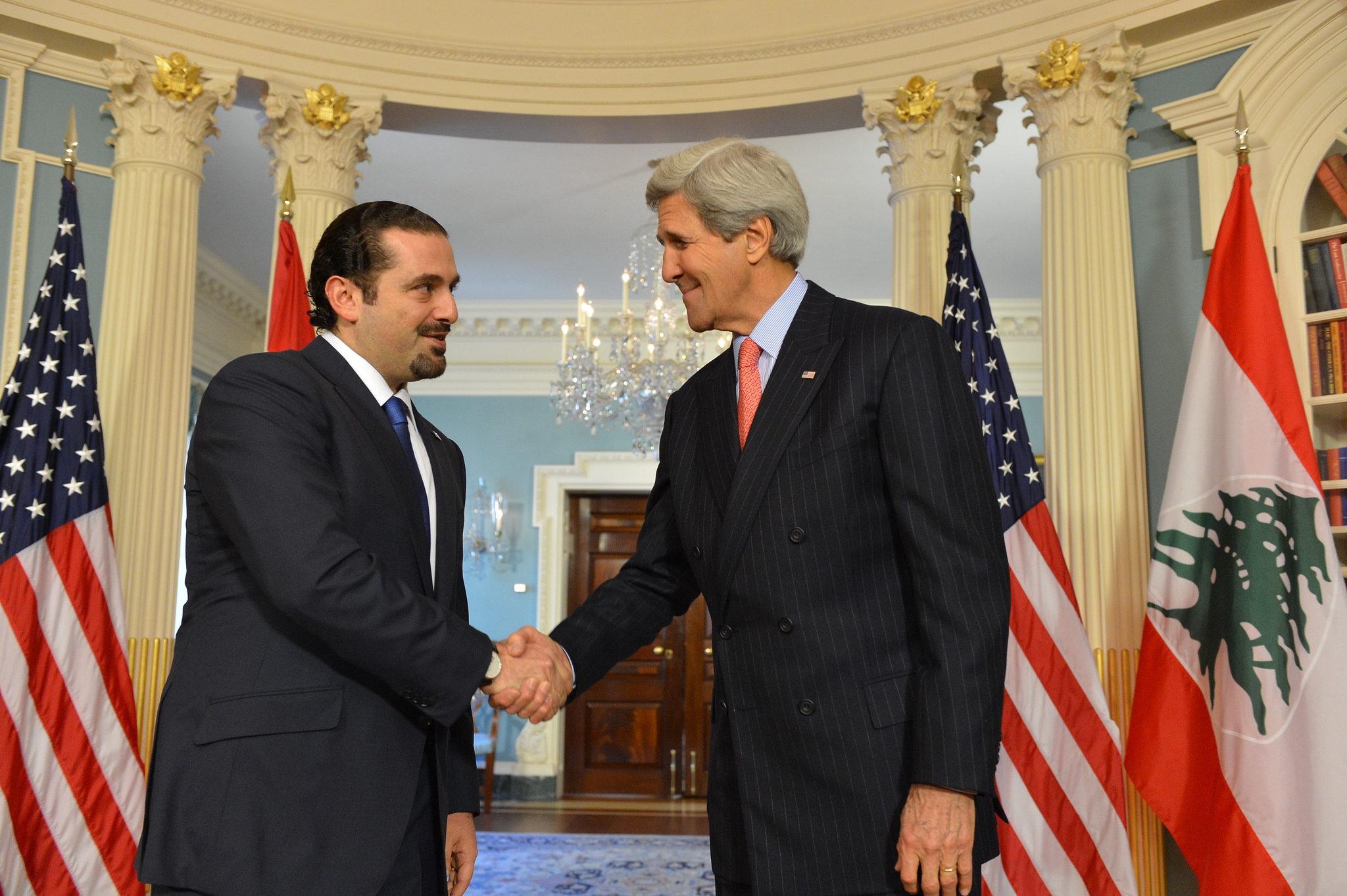 By contrast, Nasrallah has far more influence in his camp. It is fair to say that the Iranian regime seeks Nasrallah’s say and counsel more than the other way around. Nasrallah is a chief policy maker for Iranian regional policies in the Arab East.  None of the clients of the Saudi-U.S. coalition ever reached that level of clout or decision making—not even Rafiq Hariri,  who was as good in taking Saudi orders as his son.

The new government has four female ministers, which is a record for Lebanon and the region.  And some Western governments and media were cheering the appointment of a woman as interior minister, which is a first for an Arab country.  Their warped understanding of feminism may one day lead them to cheer the appointment of a woman as chief of the secret police or the division for torture within the secret police. None of the female ministers have a feminist agenda and the new government showed its insensitivity to women when it announced the creation of a new ministry for the “rehabilitation of women and youth.”

Later, in response to feminist uproar, the name was changed to “empowerment of women and youth.”  But the government did not understand that the complaint was not only about the name; linking women with youth and children is a classical sexist view.  But this is not surprising for Sa`d Hariri who, in the last cabinet, assigned a man to head a ministry of women’s affairs.

There was a lot of attention about the entrance of Hizbullah into the new cabinet. But Hizbullah has been represented in parliament since the early 1990s and (since 2005) in cabinets.  The U.S. has, yet again, expressed its disapproval of the representation of Hizbullah in government and all Western governments raised alarm over the news that Hizbullah (for electoral reasons) would be insisting on a service-based ministry. Those ministries often receive Western aid and consultancy, and the U.S. did not want any USAID money to land in Hizbullah hands. 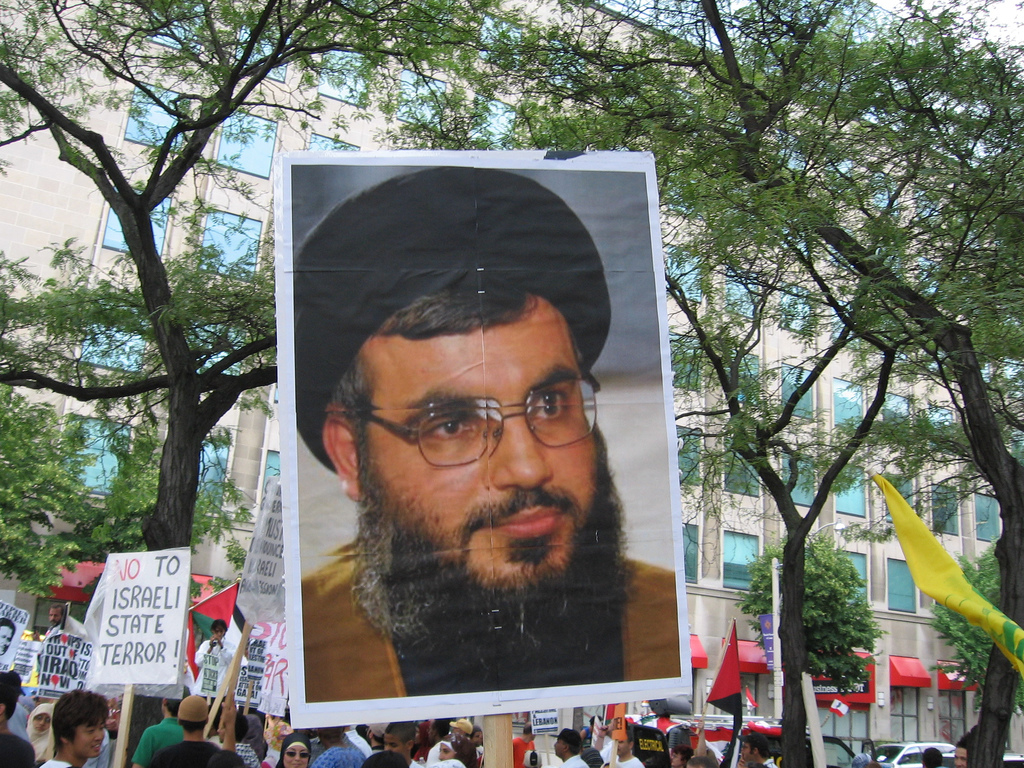 Poster of Hassan Nasrallah in 2006 rally in Toronto against Iraeli aggression/occupation of Palestine and Lebanon. (humbleslave via Flickr)

Hizbullah rejected Western pressures at first but later succumbed to those pressures by appointing a physician (said to be the personal physician of Nasrallah, although it is likely that he has more than one physician) who is not an official member of the party.  The U.S. responded by threatening sanctions if Hizbullah members or fighters were to receive aid or money from the state budget. This of course is bizarre because Hizbullah members and fighters—like other Lebanese citizens—do receive certain benefits (social security, or health coverage or loans, etc) from the state budget. The U.S. had to register its disapproval but it is unlikely that it will do more than what it normally does: deny Hizbullah leaders the chance to come to the U.S. to visit Disney Land or Disney World, and to freeze the non-existent assets of Hizbullah leaders.

US Keeps Eye on the Weapons

The U.S. also takes a firm stance against the arms of Hizbullah. U.S. and Western officials never tire of reiterating that the Lebanese Army should have a monopoly of arms in Lebanon (of course, the Lebanese people have historically always been armed).  But this Western stance is now weaker than ever: the minutes of the last meeting of the Higher Defense Council of Lebanon were leaked to Al-Akhbar, the leftwing Beirut daily, a few weeks ago, and in them, the director of Army Intelligence conceded that the Lebanese Army can’t stand in the face of the Israeli army for more than 24 hours. 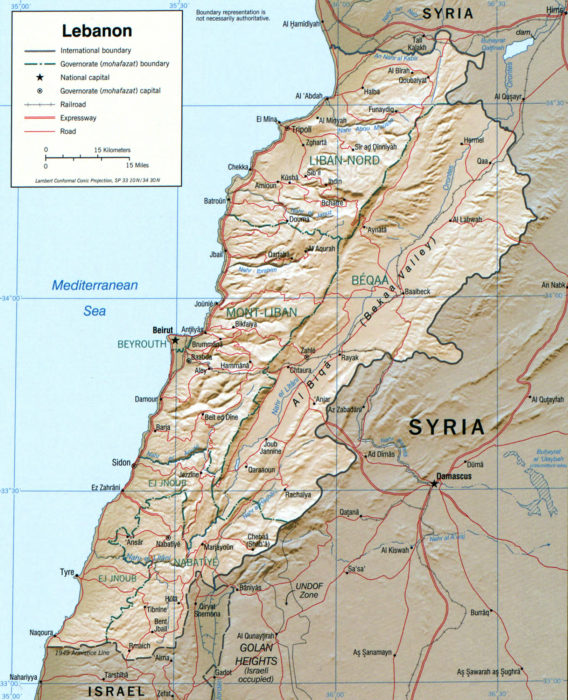 This exposes the real motives behind U.S. insistence on the Lebanese Army’s role in national defense: the U.S. wants Lebanon to be weak as it has been prior to the rise of the national resistance (first undertaken by leftist and secular groups and later by Hizbullah and others).  Since 1948 the U.S. has been key in denying Lebanon the means to defend itself against Israeli aggression.  But since 2000, when Israel was forced into a humiliating withdrawal from South Lebanon, Israel has been deterred from attacking Lebanon because it knows that there is now a Lebanese force which—unlike the Lebanese Army historically—would not stand by while it attacks and kills at will.

The new government faces a severe economic crisis. While the Lebanese pound remains relatively stable (by virtue of the constant intervention of the Central Bank) economic growth has slowed down.  Promises of Western and Gulf assistance has only translated into a trickle, while the Saudi and UAE governments still impose a tourist boycott of Lebanon (citizens from Gulf countries formed the bulk of the tourism sector). 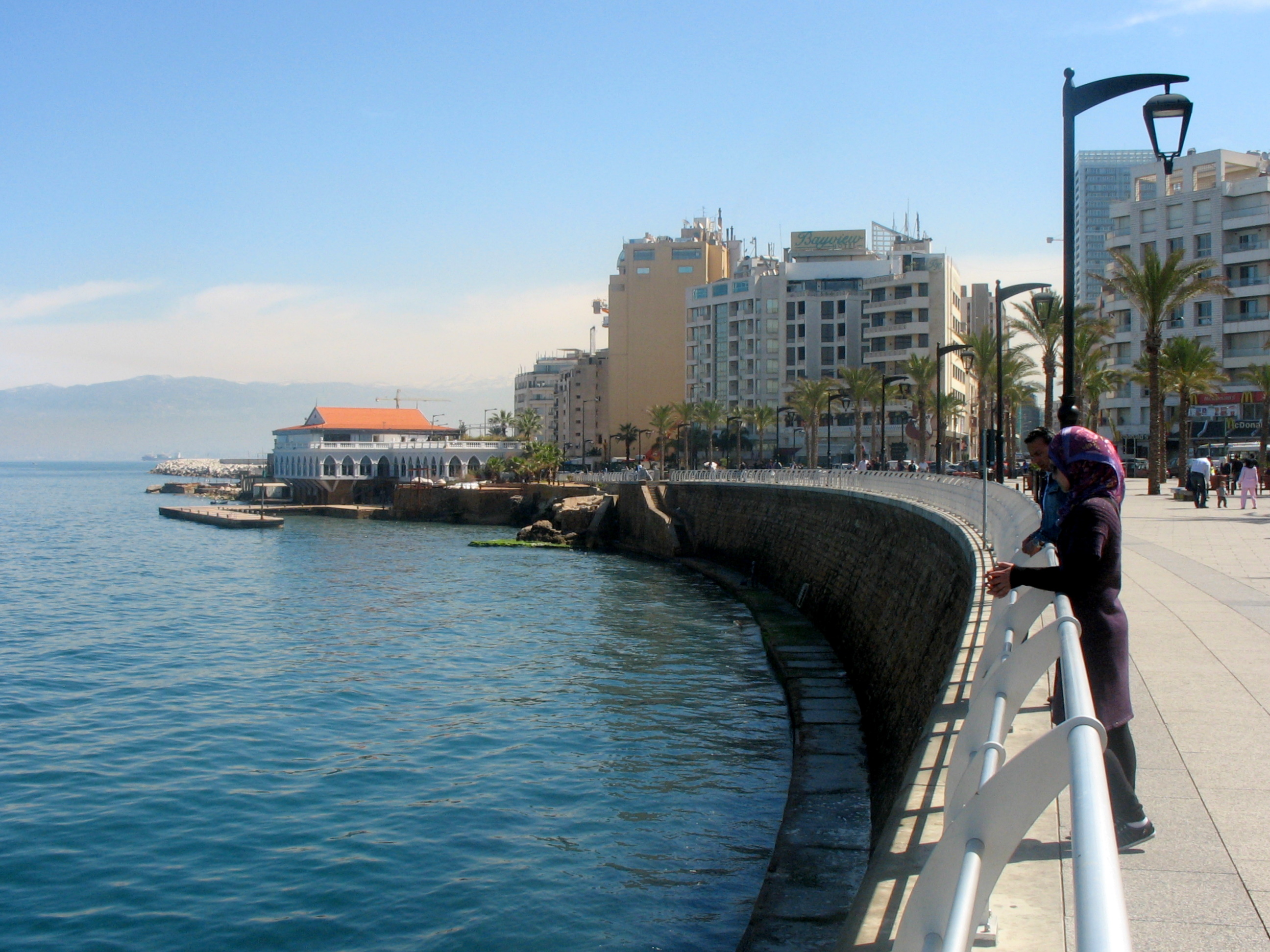 Economic growth has slowed down and the Syrian refugees have been blamed for the economic crisis by politicians of the right.  Furthermore, the Western and Gulf governments have promised a package of loans (under the Cedar conference in Rome) provided Lebanon enacts a series of “reforms.”  Those reforms will only serve to tie Lebanon deeper into Western governments and lending institutions.  Lebanon already has the highest debt per capita of any country in the world, and the “reforms” imposed by Western governments will only sink Lebanon deeper into debt and political subservience.

The sovereignty of developing countries is increasingly jeopardized by virtue of foreign debts and U.S. military intervention and training of local armies.  In the time of the Cold War, developing countries could maneuver between the two rivals which gave them more power and more sovereignty.  Lebanon today is an Iranian vassal in Western media propaganda but more like a vassal of Western and Gulf governments in reality, the presence of Hizbullah arms notwithstanding.