The Israeli prime minister’s ease with neo-Nazism and revisionist Holocaust history are not as surprising as they might seem, writes Daniel Lazare.

But what may come as a surprise is that he also has a soft spot for rightwing authoritarians with a pronounced anti-Semitic streak.  Last July, he welcomed Hungarian Prime Minister Viktor Orban to Israel even though Urban has led a 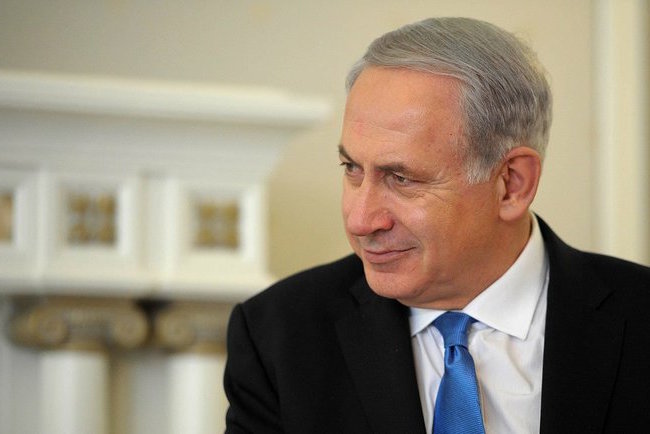 campaign to rehabilitate Miklos Horthy, the pro-Axis dictator who sent hundreds of thousands of Jews to death camps and bragged, “I have been an anti-Semite throughout my life.”  Two months later, he welcomed Philippine President Rodrigo Duterte, who once compared himself to Hitler, saying, “There are three million drug addicts [in the Philippines].  I’d be happy to slaughter them.”

He issued a joint statement with Polish Premier Mateusz Morawiecki lauding Poland’s wartime efforts to alert the world to the Nazi death camps, a statement that Israel’s own Yad Vashem Holocaust museum later repudiated on the grounds that it “contains highly problematic wording that contradicts existing and accepted historical knowledge in this field.”  His government has also supplied weapons to the neo-Nazi Azov Battalion fighting pro-Russian separatists in the eastern Ukraine.

The answer is, no, it doesn’t, for the simple reason that Zionism’s attitude toward anti-Semitism is more ambiguous than people realize.  Theodore Herzl, the Viennese journalist who founded modern Zionism, made this clear in the 1890s.  Rather than combatting anti-Semitism, he argued that Jews should accept it as an ineradicable fact of life.  Instead of opposing it, they should make use of it as a lever with which to pry their co-religionists loose from western society so that they would move to Palestine. As he put it in “The Jewish State,” the 1896 manifesto that put modern Zionism on the map:

“Great exertions will hardly be necessary to spur on the [emigration] movement.  Anti-Semites provide the requisite impetus.  They need only do what they did before, and then they will create a desire to emigrate where it did not previously exist, and strengthen it where it existed before.” 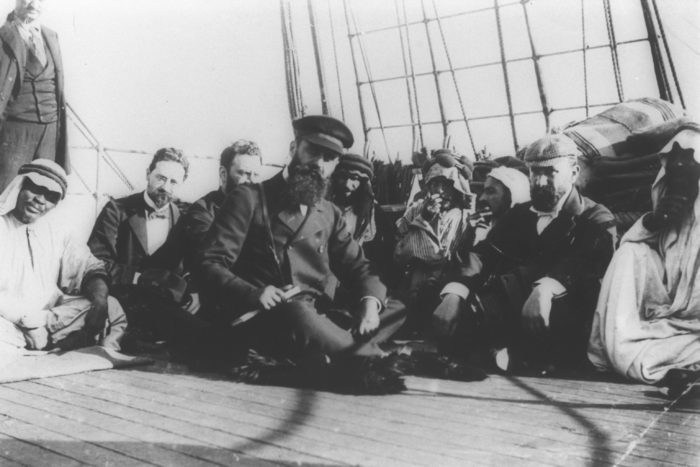 Theodor Herzl en route to Israel aboard a ship in 1898. (Wikimedia)

Herzl’s goal was twofold: to provide Jews with a homeland and to win over non-Jews by removing an irritant from their midst.  Jews, he wrote, “continue to produce an abundance of mediocre intellects who find no outlet, and this endangers our social position as much as it does our increasing wealth. Educated Jews without means are now rapidly becoming Socialists.”  The more radical they become, the more Christian society would close ranks against them.  The solution was to provide them with a homeland of their own so they would cease subverting someone else’s.

“They will pray for me in the synagogues, and in the churches as well,” Herzl confided to his diary.  Not only would Jews liberate themselves, but they would be liberating Christians too, “liberating them from us.”

Modern observers might dismiss such ideas as ancient history since they date to more than 120 years ago.  But they have become part of Zionism’s DNA.  Instead of battling anti-Semites, the movement has repeatedly followed Herzl’s advice by emulating them and adopting their techniques for their own purposes.

In the 1920s, Jews were thus shocked when Zionist settlers organized a movement to drive out Arab workers in Palestine.  The reason is that it was all too similar to anti-Semitic nationalists in Poland who were seeking to drive out Polish Jews.  An immigrant socialist complained in the Jewish Daily Forward, according to the historian Yaacov N. Goldstein, that the “conquest of labor” campaign“sends shudders through the Jewish workers in the Diaspora countries because the gentiles could try out this principle against the Jewish workers….”  Said another: “How do we react when the reactionary chauvinists in Poland fight for their ‘conquest of labor,’ meaning prevention of Jews working in Polish industrial and commercial enterprises?  How do we respond to the ‘conquest of labor’ of the Romanians?”

In the 1930s, a growing rightwing Zionist movement latched onto Benito Mussolini for much the same reason – because he wished to purify Italy just as they wished to purify Palestine.  With Mussolini’s permission, a rightwing Zionist leader named Vladimir “Ze’ev” Jabotinsky opened a training school in Civitavecchia, some 40 miles west of Rome.  According to the Marxist historian Lenni Brenner, this is how an Italian Zionist newspaper described the opening ceremonies:

“The order – ‘Attention!’  A triple chant ordered by the squad’s commanding officer – ‘Viva L’Italia! Viva Il Re!  Viva Il Duce!’ resounded, followed by the benediction which rabbi Aldo Lattes invoked in Italian and Hebrew for God, the king, and Il Duce…. ‘Giovinezza’ [the Fascist Party anthem] was sung with much enthusiasm….” 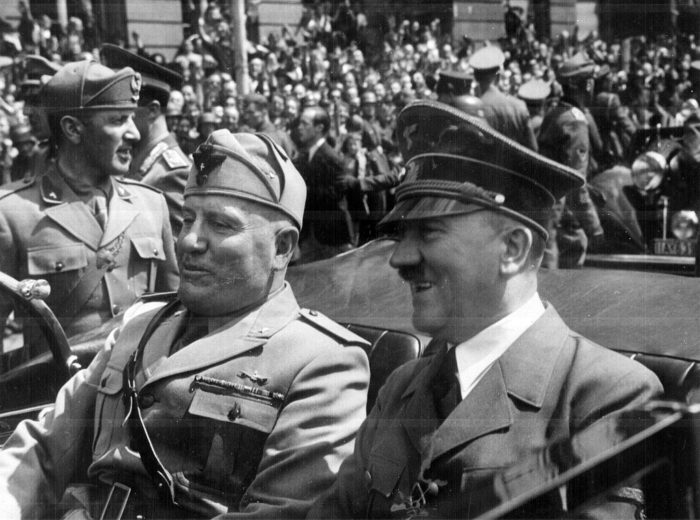 Mussolini praised Jabotinsky as a good fascist in 1935 while Abba Ahimeir, a leader of the Palestinian branch of Jabotinsky’s “Revisionist” movement, wrote a regular newspaper column entitled “Diary of a Fascist.” Ahimeir’s editor was Benzion Netanyahu, father of the current prime minister, who would later become Jabotinsky’s personal assistant.  In Poland, the leader of the Revisionists was a young man named Mieczslaw Biegun, better known by the Hebrew name Menachem Begin, who would serve as Israeli prime minister from 1977 to 1983.

When Begin embarked on a U.S. speaking tour in 1948, Albert Einstein, Hannah Arendt, Sidney Hook, and some two dozen other Jewish intellectuals sent a letter to the The New York Times denouncing his movement as “akin in its organization, methods, political philosophy and social appeal to the Nazi and Fascist parties,” one that “preache[s] an admixture of ultra-nationalism, religious mysticism, and racial superiority.”

Given this rich history of fascism, it’s no surprise 70 years later that Netanyahu would enjoy hobnobbing with a new generation of rightwing strong men (including new Brazilian President Jair Bolsonaro) or that he would look the other way when it comes to the anti-Semitism of the Polish government, which last year made it a crime to say that Poles were complicit in the Holocaust, or of Orban’s campaign against international financier George Soros.  Indeed, it’s no surprise that Netanyahu’s 26-year-old son Yair would join in the fun by posting an anti-Semitic cartoon on Facebook showing George Soros directing a conspiracy against his father.

“Is this what the kid hears at home?” wondered former Prime Minister Ehud Barak, who was also targeted by the cartoon.  But not everyone was displeased.  “Welcome to the club, Yair – absolutely amazing, wow, just wow,” tweeted Ku Klux Klan leader David Duke.

Declared the neo-Nazi Daily Stormer website: “Yair Netanyahu is a total bro.  Next he’s going to call for gassings.”

What’s a little anti-Semitism among friends?  Netanyahu’s devotion to Jewish ethnic purity has meanwhile turned him into a role model for xenophobes the world over.  So has his hostility to refugees.  Last March, he declared that illegal African migrants are “much worse” than terrorists, adding: “How could we assure a Jewish and democratic state with 50,000 and then 100,000 and 150,000 migrants a year?  After a million, 1.5 million, one could close up shop.  But we have not closed down. We built a fence and at the same time, with concern for security needs, we are making a major investment in infrastructures.” This is the same fence that Donald Trump now points to as his model for his Mexican wall.

Thanks to such attitudes at the top, Israel has seen an upsurge of racial violence.  In 2014, an Israeli stabbed a baby three times in the head, telling police: “They said that a black baby, blacks in general, are terrorists.”  A few months later, a mob shot and beat to death an African refugee named Haltom Zarhum in the southern city of Beer Sheva. A year after that, two Israeli teenagers beat to death an African refugee named Babikir Ali Adham-Abdo in a suburb of Tel Aviv.

Netanyahu, of course, will reply that he was nowhere near the scene of the crime.  But the more Zionism’s true colors come out, the more such atrocities are likely to occur.

It must be stressed that the problem with Jewish nationalism lies not with the first half of the term but the second.  Nationalism in general suffers from a similar combination of chauvinism and separatism. Examples are rife.  Nation of Islam leader Louis Farrakhan is a well-known anti-Semite who last summer inveighed against “Satanic Jews who have infected the whole world with poison and deceit.” His ideological predecessor, Marcus Garvey, whose back-to-Africa movement in the 1920s had curious parallels with Zionism, repeatedly provoked black leftists of the day by speaking out in favor of Jim Crow and meeting with a Ku Klux Klan leader named Edward Young Clarke in Atlanta.

“I regard the Klan, the Anglo-Saxon clubs and White American societies, as far as the Negro is concerned, as better friends of the race than all other groups of hypocritical whites put together,” he wrote.  “I like honesty and fair play.  You may call me a Klansman if you will, but, potentially, every white man is a Klansman as far as the Negro in competition with whites socially, economically and politically is concerned, and there is no use lying.”

Garvey’s dark side was forgotten in the 1960s when he emerged as a hero of the Black Power movement.  Zionism’s dark side was similarly forgotten after the Six Day War in 1967 when it emerged as a favorite ally of the United States.  Thereafter, anyone who tried to bring up the love affair with fascism was ostracized by neo-conservatives, many of them Jewish, who increasingly dominated intellectual discourse.

But with ethno-chauvinism now staging a powerful comeback, Zionism’s far-right past has returned to haunt it — and the rest of the world as well.

Daniel Lazare is the author of “The Frozen Republic: How the Constitution Is Paralyzing Democracy” (Harcourt Brace, 1996) and other books about American politics.  He has written for a wide variety of publications from The Nationto Le Monde Diplomatique and blogs about the Constitution and related matters at Daniellazare.com.