Written in 2014 during the Obama adminstration, this article by Eva Golinger gives insightful background to the current crisis in Venezuela and Washington’s role in stirring it up.

Anti-government protests in Venezuela that seek regime change have been led by several individuals and organizations with close ties to the U.S. government.

Leopoldo Lopez and Maria Corina Machado- two of the public leaders behind the violent protests that started in February (2014) – have long histories as collaborators, grantees and agents of Washington. The National Endowment for Democracy (NED) and the U.S. Agency for International Development (USAID) have channeled multi-million dollar funding to Lopez’s political parties Primero Justicia and Voluntad Popular, and Machado’s NGO Sumate and her electoral campaigns.

These Washington agencies have also filtered more than $14 million to opposition groups in Venezuela between 2013 and 2014, including funding for their political campaigns in 2013 and for the current anti-government protests in 2014. This continues the pattern of financing from the U.S. government to anti-Chavez groups in Venezuela since 2001, when millions of dollars were given to organizations from so-called “civil society” to execute a coup d’etat against President Chavez in April 2002. After their failure days later, USAID opened an Office of Transition Initiatives (OTI) in Caracas to, together with the NED, inject more than $100 million in efforts to undermine the Chavez government and reinforce the opposition during the following eight years.

At the beginning of 2011, after being publicly exposed for its grave violations of Venezuelan law and sovereignty, the OTI closed its doors in Venezuela and USAID operations were transferred to its offices in the U.S.. The flow of money to anti-government groups didn’t stop, despite the enactment by Venezuela’s National Assembly of the Law of Political Sovereignty and National Self-Determination at the end of 2010, which outright prohibits foreign funding of political groups in the country. U.S. agencies and the Venezuelan groups that receive their money continue to violate the law with impunity. In the Obama Administration’s Foreign Operations Budgets, between $5-6 million have been included to fund opposition groups in Venezuela through USAID since 2012. 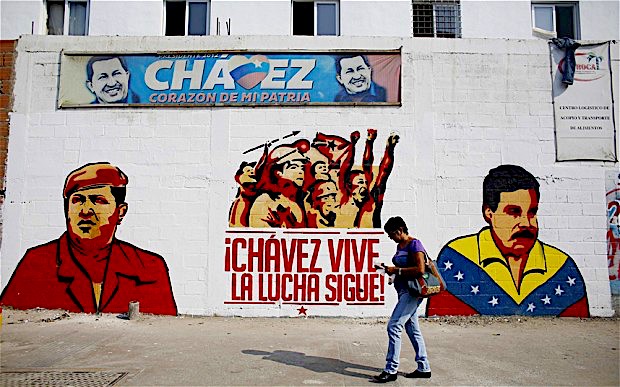 A Principal Financier of Destabilization

The NED, a “foundation” created by Congress in 1983 to essentially do the CIA’s work overtly, has been one of the principal financiers of destabilization in Venezuela throughout the Chavez administration and now against President Maduro. According to NED’s 2013 annual report, the agency channeled more than $2.3 million to Venezuelan opposition groups and projects. Within that figure, $1,787,300went directly to anti-government groups within Venezuela, while another$590,000was distributed to regional organizations that work with and fund the Venezuelan opposition. More than $300,000 was directed towards efforts to develop a new generation of youth leaders to oppose Maduro’s government politically.

One of the groups funded by NED to specifically work with youth is FORMA, an organization led by Cesar Briceño and tied to Venezuelan banker Oscar Garcia Mendoza. Garcia Mendoza runs the Banco Venezolano de Credito, a Venezuelan bank that has served as the filter for the flow of dollars from NED and USAID to opposition groups in Venezuela, including Sumate, CEDICE, Sin Mordaza, Observatorio Venezolano de Prisiones and FORMA, amongst others.

Another significant part of NED funds in Venezuela from 2013-2014 was given to groups and initiatives that work in media and run the campaign to discredit the government of President Maduro. Some of the more active media organizations outwardly opposed to Maduro and receiving NED funds include Espacio Publico, Instituto Prensa y Sociedad (IPYS), Sin Mordaza and GALI. Throughout the past year, an unprecedented media war has been waged against the Venezuelan government and President Maduro directly, which has intensified during the past few months of protests.

In direct violation of Venezuelan law, NED also funded the opposition coalition, the Democratic Unity Table (MUD), via the U.S. International Republican Institute (IRI), with $100,000 to “share lessons learned with [anti-government groups] in Nicaragua, Argentina and Bolivia…and allow for the adaption of the Venezuelan experience in these countries.” Regarding this initiative, the NED 2013 annual report specifically states its aim: “To develop the ability of

political and civil society actors from Nicaragua, Argentina and Bolivia to work on national, issue-based agendas for their respective countries using lessons learned and best practices from successful Venezuelan counterparts.  The Institute will facilitate an exchange of experiences between the Venezuelan Democratic Unity Roundtable and counterparts in Bolivia, Nicaragua and Argentina. IRI will bring these actors together through a series of tailored activities that will allow for the adaptation of the Venezuelan experience in these countries.”

IRI has helped to build right-wing opposition parties Primero Justicia and Voluntad Popular, and has worked with the anti-government coaltion in Venezuela since before the 2002 coup d’etat against Chavez. In fact, IRI’s president at that time, George Folsom, outwardly applauded the coup and celebrated IRI’s role in a press release claiming, “The Institute has served as a bridge between the nation’s political parties and all civil society groups to help Venezuelans forge a new democratic future…”

Detailed in a report published by the Spanish institute FRIDE in 2010, international agencies that fund the Venezuelan opposition violate currency control laws in order to get their dollars to the recipients. Also confirmed in the FRIDE report was the fact that the majority of international agencies, with the exception of the European Commission, are bringing in foreign money and changing it on the black market, in clear violation of Venezuelan law. In some cases, as the FRIDE analysis reports, the agencies open bank accounts abroad for the Venezuelan groups or they bring them the money in hard cash. The U.S. Embassy in Caracas could also use the diplomatic pouch to bring large quantities of unaccounted dollars and euros into the country that are later handed over illegally to anti-government groups in Venezuela.

What is clear is that the U.S. government continues to feed efforts to destabilize Venezuela in clear violation of law. Stronger legal measures and enforcement may be necessary to ensure the sovereignty and defense of Venezuela’s democracy.

This article was republished with permission of the author.

Read this interview with Eva Golinger about Venezuela in Jan. 2013 published on Consortium News.

Since 2003, Eva, a graduate of Sarah Lawrence College and CUNY Law School in New York, has been investigating, analyzing and writing about U.S. intervention in Venezuela using the Freedom of Information Act (FOIA) to obtain information about U.S. Government efforts to undermine progressive movements in Latin America. Her first book, “The Chávez Code,” has been translated and published in 8 languages (English, Spanish, French, German, Italian, Russian, Farsi & Turkish) and is presently being made into a feature film.

← ROBERT PARRY: With the US Meddling Again in Latin America, a Look Back at How Washington Promoted Genocide in Guatemala
Israel’s Drive to Become a Modern-Day Sparta →