A former army chief may present a challenge to Benjamin Netanyahu, but his campaign’s exultation of destruction and oppression is chilling, reports Jonathan Cook.

Already, at this early stage of campaigning, some 31 per cent of the Israeli public prefer Gantz to head the next government over Netanyahu, who is only months away from becoming the longest-serving leader in Israel’s history.

Gantz is being feted as the new hope, a chance to change direction after a series of governments under Netanyahu’s leadership have over the past decade shifted Israel ever further to the right.

Like Israel’s former politician generals, from Yitzhak Rabin to Ehud Barak and Ariel Sharon, Gantz is being portrayed – and portraying himself – as a battle-hardened warrior, able to make peace from a position of strength. 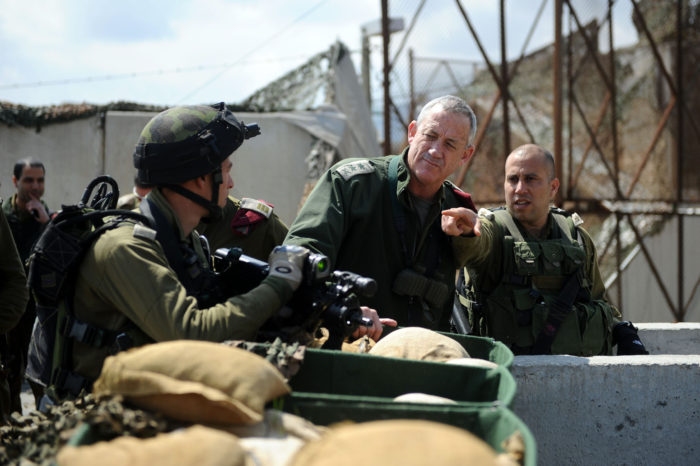 Before he had issued a single policy statement, polls showed him winning 15 of the 120 parliamentary seats, a welcome sign for those hoping that a centere-left coalition can triumph this time.

But the reality of what Gantz stands for – revealed this week in his first election videos – is far from reassuring.

In 2014, he led Israel into its longest and most savage military operation in living memory: 50 days in which the tiny coastal enclave of Gaza was bombarded relentlessly.

By the end, one of the most densely populated areas on earth – its 2 million inhabitants already trapped by a lengthy Israeli blockade – lay in ruins. More than 2,200 Palestinians were killed in the onslaught, a quarter of them children, while tens of thousands were left homeless. 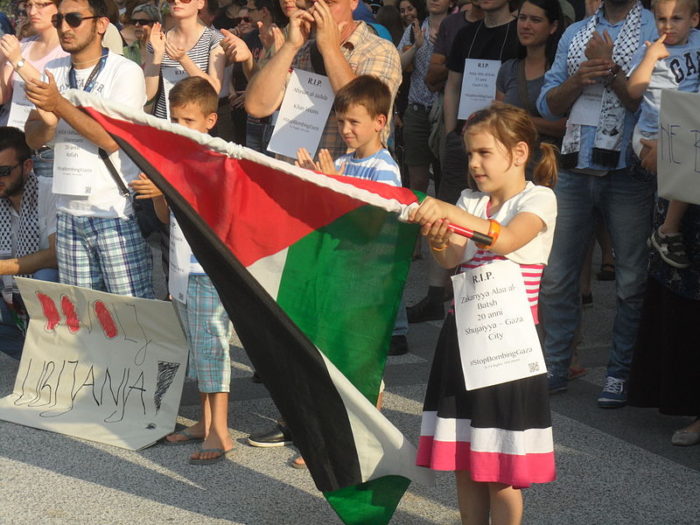 Children as far away as Ljubljana, Slovenia, participate in rally against Israeli violence in the Gaza strip, July 18, 2014. (Mzaplotnik on Wikimedia)

The world watched, appalled. Investigations by human rights groups such as Amnesty International concluded that Israel had committed war crimes.

One might have assumed that during the election campaign Gantz would wish to draw a veil over this troubling period in his military career. Not a bit of it.

One of his campaign videos soars over the rubble of Gaza, proudly declaring that Gantz was responsible for destroying many thousands of buildings. “Parts of Gaza have been returned to the Stone Age,” the video boasts.

This is a reference to the Dahiya doctrine, a strategy devised by the Israeli military command of which Gantz was a core member. The aim is to lay waste to the modern infrastructure of Israel’s neighbors, forcing survivors to eke out a bare existence rather than resist Israel.

The collective punishment inherent in the apocalyptic Dahiya doctrine is an undoubted war crime.

More particularly, the video exults in the destruction of Rafah, a city in Gaza that suffered the most intense bout of bombing after an Israeli soldier was seized by Hamas. In minutes, Israel’s indiscriminate bombardment killed at least 135 Palestinian civilians and wrecked a hospital.

According to investigations, Israel had invoked the Hannibal Procedure, the code name for an order allowing the army to use any means to stop one of its soldiers being taken. That includes killing civilians as “collateral damage” and, more controversially for Israelis, the soldier himself.

Gantz’s video flashes up a grand total of “1,364 terrorists killed,” in return for “three-and-a-half years of quiet.” As Israel’s liberal Haaretz daily observed, the video “celebrates a body count as if this were just some computer game.” 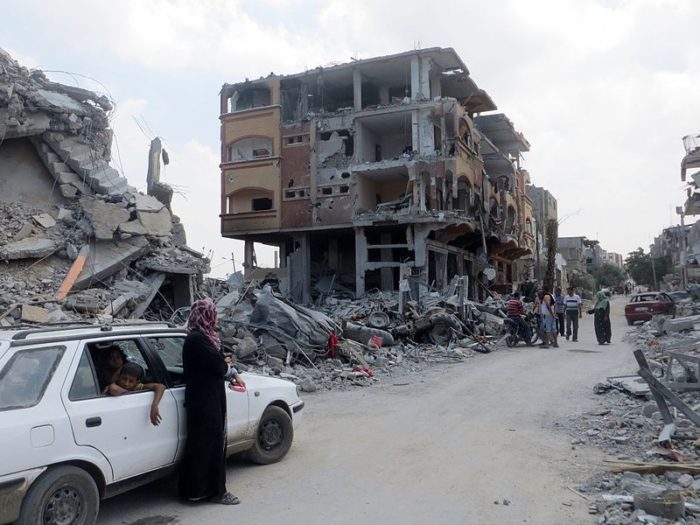 But the casualty figure cited by Gantz exceeds even the Israel army’s self-serving assessment – as well, of course, as dehumanizing those “terrorists” fighting for their freedom.

A more impartial observer, Israeli human rights group B’Tselem, estimates that the Palestinian fighters killed by Israel amounted to 765. By their reckoning, and that of other bodies such as the United Nations, almost two-thirds of Gazans killed in Israel’s 2014 operation were civilians.

Further, the “quiet” Gantz credits himself with was enjoyed chiefly by Israel.

In Gaza, Palestinians faced regular military attacks, a continuing siege choking off essential supplies and destroying their export industries, and a policy of executions by Israeli snipers firing on unarmed demonstrators at the perimeter fence imprisoning the enclave.

Gantz’s campaign slogans “Only the Strong Wins” and “Israel Before Everything” are telling. Everything, for Gantz, clearly includes human rights.

It is shameful enough that he believes his track record of war crimes will win over voters. But the same approach has been voiced by Israel’s new military chief of staff.

Aviv Kochavi, nicknamed the Philosopher Officer for his university studies, was inaugurated this month as the army’s latest head. In a major speech, he promised to reinvent the fabled “most moral army in the world” into a “deadly, efficient” one.

In Kochavi’s view, the rampaging military once overseen by Gantz needs to step up its game. And he is a proven expert in destruction.

In the early stages of the Palestinian uprising that erupted in 2000, the Israeli army struggled to find a way to crush Palestinian fighters concealed in densely crowded cities under occupation.

Kochavi came up with an ingenious solution in Nablus, where he was brigade commander. The army would invade a Palestinian home, then smash through its walls, moving from house to house, burrowing through the city unseen. Palestinian space was not only usurped, but destroyed inside-out.

Gantz, the former general hoping to lead the government, and Kochavi, the general leading its army, are symptoms of just how complete the militaristic logic that has overtaken Israel really is. An Israel determined to become a modern-day Sparta.

Should he bring about Netanyahu’s downfall, Gantz, like his predecessor politician-generals, will turn out to be a hollow peace-maker. He was trained to understand only strength, zero-sum strategies, conquest and destruction, not compassion or compromise.

More dangerously, Gantz’s glorification of his military past is likely to reinforce in Israelis’ minds the need not for peace but for more of the same: support for an ultranationalist right that bathes itself in an ethnic supremacist philosophy and dismisses any recognition of the Palestinians as human beings with rights.