Was former FBI Director James Comey pulling a Hoover on Trump to keep him in line? asks Ray McGovern.

For those interested in evidence — or the lack of it— regarding collusion between Russia and the presidential campaign of Donald Trump, we can thank the usual Russia-gate promoters at The New York Times and CNN for inadvertently filling in some gaps in recent days.

Stooping to a new low, Friday’s Times headline screamed: “F.B.I. Opened Inquiry Into Whether Trump Was Secretly Working on Behalf of Russia.” The second paragraph noted that FBI agents “sought to determine whether Mr. Trump was knowingly working for Russia or had unwittingly fallen under Moscow’s influence.”

Trump had been calling for better relations with Russia during his presidential campaign. As journalist Michael Tracy tweeted on Sunday, the Times report made it “not a stretch to say: the FBI criminally investigating Trump on the basis of the ‘national security threat’ he allegedly poses, with the ‘threat’ being his perceived policy preferences re: Russia, could constitute literal criminalization of deviation from foreign policy consensus.”

On Monday night CNN talking heads, like former House Intelligence Committee chair Mike Rogers, were expressing wistful hope that the FBI had more tangible evidence than Trump’s public statements to justify such an investigation. Meanwhile, they would withhold judgment regarding the Bureau’s highly unusual step.

NYT readers had to get down to paragraph 9 to read: “No evidence has emerged publicly that Mr. Trump was secretly in contact with or took direction from Russian government officials.” Four paragraphs later, the Times’ writers noted that, “A vigorous debate has taken shape among former law enforcement officials … over whether FBI investigators overreacted.”

That was what Republican Rep. Trey Gowdy was wondering when he grilled former CIA director John Brennan on May 23, 2017 on what evidence he had provided to the FBI to catalyze its investigation of Trump-Russia collusion.

Brennan replied: “I don’t do evidence.”

The best Brennan could do was repeat the substance of a clearly well-rehearsed statement: “I encountered and am aware of information and intelligence that revealed contacts and interactions between Russian officials and U.S. persons involved in the Trump campaign … that required further investigation by the Bureau to determine whether or not U.S. persons were actively conspiring, colluding with Russian officials.”

CNN joined the piling on Monday, quoting former FBI General Counsel James Baker in closed-door Congressional testimony to the effect that FBI officials were weighing “whether Trump was acting at the behest of [the Russians] and somehow following directions, somehow executing their will.” The problem is CNN also noted that Lisa Page, counsel to then FBI Acting Director Andrew McCabe, testified that there had been “indecision in the Bureau as to whether there was sufficient predication to open [the investigation].’ “Predication” is another word for evidence.

Within hours of Comey’s firing on May 9, 2017, Page’s boyfriend and a top FBI counterintelligence official, Peter Strzok texted her: “We need to open the case we’ve been waiting on now while Andy [McCabe] is acting [director].” After all, if Trump were bold enough, he could have appointed a new FBI director and who knew what might happen then. When Page appeared before Congress, she was reportedly asked what McCabe meant. She confirmed that his text was related to the Russia investigation into potential collusion.

The Times and CNN, however unintentionally, have shed light on what ensued after Trump finally fired Comey. Apparently, it finally dawned on Trump that, on Jan. 6, 2017, Comey had treated him to thetime-honored initiation-rite-for-presidents-elect — with rubrics designed by former FBI Director J. Edgar Hoover.

It seems then-FBI Director James Comey rendered a good impersonation of Hoover that day when he briefed President-elect Trump on the scurrilous “Steele dossier” that the FBI had assembled on Trump. Excerpts from an interview Trump gave to the Times(below) after the firing throw light on what Trump says was at least part of his motivation to dump Comey.

To dramatize the sensitivity of the dossier, Comey asked then-National Intelligence Director James Clapper and the heads of the CIA and NSA to depart the room at the Trump Tower, leaving Comey alone with the President-elect. The Gang of Four had already briefed Trump on the evidence-impoverished “Intelligence Community Assessment.” That “assessment” alleged that Putin himself ordered his minions to help Trump win. The dossier had been leaked to the media, which withheld it but Buzzfeed published it on Jan. 10.?

Evidently, it took Trump four months to fully realize he was being played, and that he couldn’t expect the “loyalty” he is said to have asked of Comey. So Trump fired Comey on May 9. Two days later he told NBC’s Lester Holt:

“When I decided to just do it, I said to myself, I said, ‘You know, this Russia thing with Trump and Russia is a made-up story, it’s an excuse by the Democrats for having lost an election that they should’ve won.’” 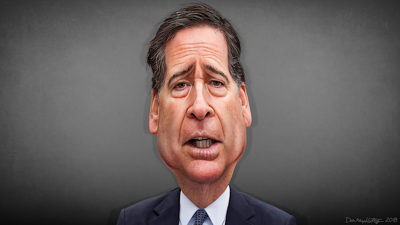 Comey: Pulled a Hoover on Trump? (Carciature by DonkeyHotey)

The mainstream media and other Russia-gater aficionados immediately seized on “this Russian thing” as proof that Trump was trying to obstruct the investigation of alleged Russian collusion with the Trump campaign. However, in the Holt interview Trump appeared to be reflecting on Comey’s J. Edgar Hoover-style, one-on-one gambit alone in the room with Trump.

Would Comey really do a thing like that? Was the former FBI director protesting too much in his June 2017 testimony to the Senate Intelligence Committee when he insisted he’d tried to make it clear to Trump that briefing him on the unverified but scurrilous information in the dossier wasn’t intended to be threatening. It tool a few months but it seems Trump figured out what he thought Comey was up to.

Trump to NYT: ‘Leverage’ (aka Blackmail)

In a long Oval Office interview with the Times on July 19, 2017, Trump said he thought Comey was trying to hold the dossier over his head.

“When he [James B. Comey] brought it [the dossier] to me, I said this is really made-up junk. I didn’t think about anything. I just thought about, man, this is such a phony deal. … I said, this is — honestly, it was so wrong, and they didn’t know I was just there for a very short period of time. It was so wrong, and I was with groups of people. It was so wrong that I really didn’t, I didn’t think about motive. I didn’t know what to think other than, this is really phony stuff.”

The dossier, paid for by the Democratic National Committee and the Clinton campaign and compiled by former British spy Christopher Steele, relates a tale of Trump allegedly cavorting with prostitutes, who supposedly urinated on each other before the same bed the Obamas had slept in at the Moscow Ritz-Carlton hotel. [On February 6, 2018, The Washington Post reported that that part of the dossier was written Cody Shearer, a long-time Clinton operative and passed it along to Steele. Shearer ignored a request for comment from Consortium News. [Shearer had been a Consortium advisory board member who was asked to resign and left the board.]

McGovern lays out more details during a 12-minute interview on Jan. 10 with Tyrel Ventura of “Watching the Hawks.”

Ray McGovern works with Tell the Word, a publishing arm of the ecumenical Church of the Saviour in inner-city Washington. A CIA analyst for 27 years and Washington area resident for 56 years, he has been attuned to these machinations. He is co-founder of Veteran Intelligence Professionals for Sanity (VIPS).

← A Workers’ Struggle in India to ‘Make the Land Proud’ as Global Unrest Spreads
How Not to Build a ‘Great, Great Wall’ →