Historian and U.K. analyst Mark Curtis checks out the Twitter accounts of journalists whose names have been associated with the Integrity Initiative, a British “counter disinformation” program.

The U.K.-financed Integrity Initiative, managed by the Institute for Statecraft, is ostensibly a “counter disinformation” program to challenge Russian information operations. However, it has been revealed that the Integrity Initiative Twitter handle and some individuals associated with this program have also been tweeting messages attacking Labour leader Jeremy Corbyn. This takes on special meaning in light of the numerous U.K. military and intelligence personnel associated with the program, documented in an important briefing by academics in the Working Group on Syria Propaganda and Media. 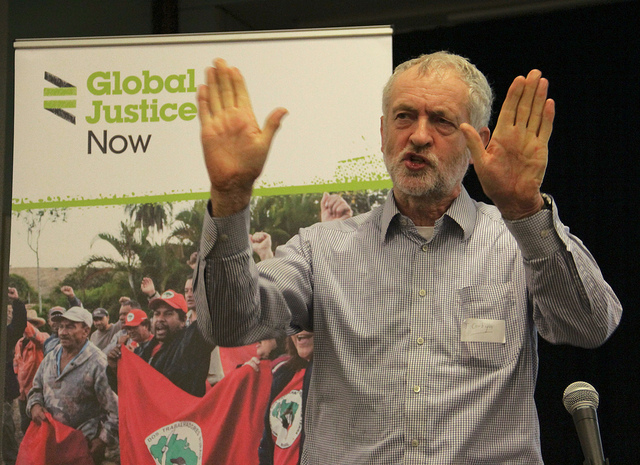 Analysis of 11 of these individuals has been undertaken to assess to what extent their tweets have linked Corbyn unfairly (for a definition see below) to Russia. The results show two things:

The Integrity Initiative said in a tweet, “we are not ‘anti-Russian’ and do not ‘target’ Mr Corbyn.” However, that tweet was preceded by the following tweets:

Here are examples of tweets from the 11 individuals.

Times columnist Edward Lucas has published an article on the Integrity Initiative website and been quoted as saying that his work with the Initiative has not been paid or involved anything improper. (See section 7.1.3 of this briefing note.) On Twitter, he has accused Corbyn of having blind spots on Putin’s plutocracy and Kremlin imperialism.”

In which I blast @jeremycorbyn for his blind spot on Putin's plutocracy http://t.co/UOWeAaOilL

In another tweet, he praised as brilliant an article about Corbyn “playing into Russia’s hands on the Scribal poisoning.”

Deborah Haynes, until recently defence editor of The Times and now foreign affairs editor at Sky News, has tweeted:

. @jeremycorbyn talking tough, v quick to demand end to UK arms sales to Saudi Arabia after #Khashoggi death in stark contrast to his feeble response towards Russia over #Skripal attack

Haynes has also tweeted about Corbyn “displaying staggering naivety and a complete failure to understand this state-sponsored attack by Russia on the UK. Appalling. Is he for real?”

Haynes has also tweeted: “Incredible that @jeremycorbynis attempting to score party-political points in wake of hugely significant statement by @theresa_may on Skripal attack by Russia.”

Washington Post columnist Anne Applebaum has tweeted that Corbyn is a “useful idiot” of Russia; about a “precise echo of Kremlin propaganda from Corbyn,” and that “Surprise! Russia sides with Corbyn against Cameron.”

David Clark, a former adviser to the late Labour PM, Robin Cook, has tweeted that Corbyn is an “apologist” for Putin.  Below is another of Clark’s tweets.

It is an article of ideological faith for Corbyn and people like him that everything wrong with the world is the fault of the capitalist West. Therefore, nothing can be the fault of anyone else.

Anders Aslund of the Atlantic Council in the U.S. has tweeted, referring to Corbyn: “Once a communist always so.”

His colleague at the Atlantic Council, Ben Nimmo, sent the following three tweets on Corbyn’s candidacy for the Labour leadership in August 2015:

How #Putin's @RT_com is backing Jeremy Corbyn – my piece in @thedailybeast http://t.co/PqNcPYMRQu pic.twitter.com/irIa8kIrcZ

Natalie Nougayrede, Guardian columnist and on its editorial board, has tweeted this:

"the time for equivocation, given the sinister nature of Mr Putin’s regime, is over"
Guardian editorial on shameful #Corbyn &Co reaction to #Russia behaviour & chemical weapon use https://t.co/ALmpGCoKh5

Three Guardian/Observer-linked journalists were invited to speak at an Integrity Initiative event in London in November 2018: Carole Cadwalladr, Nick Cohen and James Ball.

Cadwalladr has tweeted that “Labour has a Russia problem,” that Corbyn adviser Seumas Milne is “pro-Putin” and that “Milne’s support for Putin has made him a Russian propaganda tool.” One of Cadwalladr’s tweets noted:

"What he has done, wittingly or unwittingly, is to work with the Kremlin’s agenda." Extraordinary quote from MP & expert on Russian active measures @IoWBobSeely in this incredible in-depth profile on Seamus Milne – @jeremycorbyn's chief advisor https://t.co/NNc9verN57

Nick Cohen has tweeted that “Labour is led by Putin fans” and: “What is worse? Farage and Corbyn and twitter trolls divert attention from Russia’s political assassinations because they believe Putin is innocent or because they are morally corrupt?” He has also retweeted an Observer article of his claiming that Labour leaders have promoted “endorsements of Russian imperialism” and that Corbyn’s policy has given Russia “a free pass” in Syria.

Here's the political problem. Tories don't want to investigate Russia/Brexit because it undermines the referendum result. Labour doesn't because it is led by Putin fanshttps://t.co/MFZwBmmkqA

James Ball has tweeted a link to his own article in the New Statesman saying that Corbyn is “playing into Russia’s hands on the Skripal poisoning” and accusing Corbyn to the effect that he “took money from Russia Today.”

Linking Assange to the Kremlin

Many of the same individuals have also been tweeting false statements about Julian Assange and Russia.

The Integrity Initiative twitter site itself retweeted a Guardian smear article about a  lawyer, Adam Waldman, visiting the Wikileaks founder.

It also tweeted: “If you still believe Assange is some kind of hero, you deserve pity at best.”

Anders Aslund has tweeted that Assange “represents certain Russian agencies” that “Wikileaks, Assange & Snowden are nothing but highly successful Russian special operations” and “Kremlin agents” and that “Assange is collaborating w[ith] Russia Today as program host. Would be strange if not full-fledged agent.”

Cadwalladr has also sought to overtly link Assange to the Kremlin.  She has tweeted that “Assange & Milne… are both Russian propaganda tools,” that Assange is a “special friend” of Russian intelligence and that Wikileaks has “colluded with…the Kremlin.”

Nick Cohen has also made many smears against Julian Assange, variously calling him a “Russian stooge,”  a “Putin agent,”  “pro-Putin,” a “Russian toady”, that he “works for Russia propaganda machine” while “Wikileaks will think whatever Putin tells it to think.”

David Leask, chief reporter of The Herald (Scotland), has described Assange as a “Kremlin proxy” while Anne Applebaum tweeted: “’Wikileaks is a front for Russian intelligence,’” linking to an article of the same headline. Edward Lucas retweeted his Times article suggesting that Assange and Wikileaks are part of the “Kremlin-loving camp”while David Clark has tweeted that “Assange is an active accomplice” of autocrats such as Putin.

There are some key points to be made about this analysis.

First, some of the tweets made by these individuals on Corbyn and Assange, not all of which are included here, are fair comment, even if, in my view, they are usually wrong. But others go beyond this, inferring that Corbyn (and Assange) are in effect agents of Russia and/or are willingly and knowingly amplifying Russia’s agenda, as little more than “tools” – with no evidence provided (understandably, since there is none). There is also sometimes the association of Corbyn with former communists. These areas are held to constitute smearing.

Mark Curtis is an historian and analyst of U.K. foreign policy and international development and the author of six books, the latest being an updated edition of “Secret Affairs: Britain’s Collusion with Radical Islam.”

34 comments for “The Twitter Smearing of Corbyn and Assange”