Women gathered in Paris to confirm their commitment to the populist movement and women’s place in the country’s revolutionary history, reports Léa Bouchoucha from Paris for Consortium News.

Those were some of the signs carried Jan. 6 in Paris by women in the first all-female demonstration of the Yellow Vest movement.

Following some outbreaks of violence in larger-scale demonstrations on Saturday, the women’s protest was cast in some social media posts, as well as this AP account, as a bid to restore peace to the movement. However, the all-female protest was not responding to Saturday’s events.  It had been planned in advance, since Dec. 20, via a Facebook page that registered 15,000 people expressing interest and 2,000 committing to protest. The Paris demonstration on Sunday attracted several hundred, according to press accounts.

However, some women carried signs that said “stop violence,” reflecting on the violence that has marked many demonstrations and by some estimates hurt the movement’s popularity. 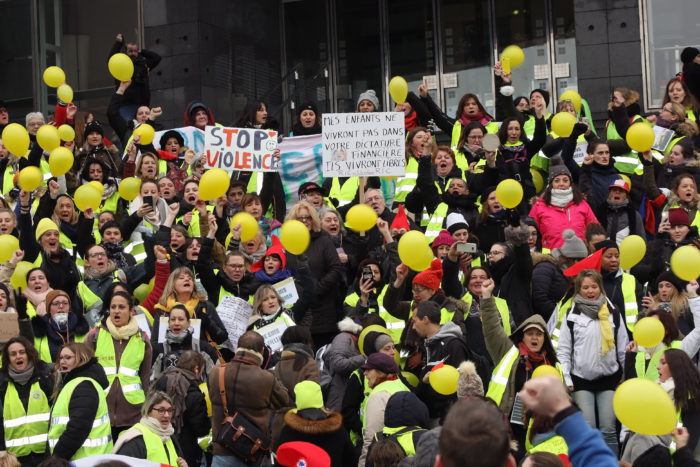 Although the festive mood contrasted with the often-angry demonstrations on Saturday, women at the Paris protest reiterated the same basic frustrations about everyday life becoming more of a struggle.

Framboise Clausse, a mother of five who demonstrates every weekend with her daughters at their home in the northwestern Bretagne region, made a trip of 437 kilometers, about four hours by car, to join the Yellow Vest women in Paris.

No Real Revolution Without Women

“Mirabeau used to say that as long as women are not involved, there is no real revolution,” said the mother of five, referring to Honoré Gabriel Riqueti, the count of Mirabeau, an  early leader of the French Revolution.

Clausse said she came to Paris to protest things she hears about during her work as a consultant in a job-placement center.

“People are broken because of their working environment,” she said. “The world is very difficult and violent and what we need is to have a sharing, a true sharing.”

Clauss earns 1,500 euros, or about $1700 a month and her husband is currently drawing unemployment benefits of about $900. She said she is anxious about her dwindling purchasing power. 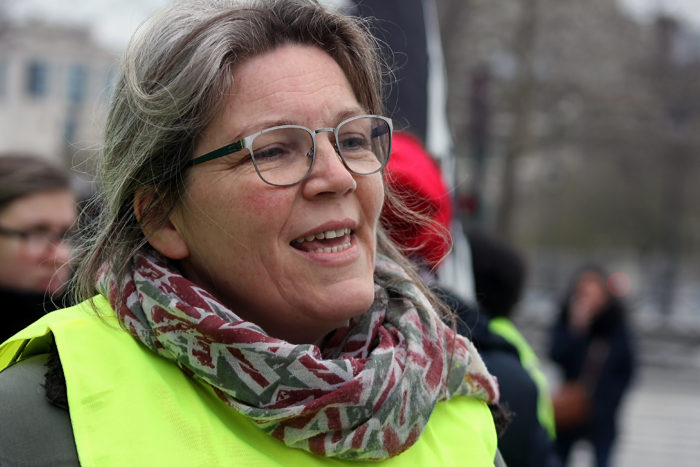 “As the years go by, I noticed how we are eating less meat because we cannot afford it,” she said “Basic products are more expensive. Let’s not even speak about the high cost of rents, which are expensive, even in the rural area where I live. Getting to the end of the month is very, very difficult. One of my daughters, who is doing professional training, had to come back to live with us because she can’t afford living by her own.”

As with all those quoted, Clausse spoke in French and the interview was translated.

Clausse said she left her ballot blank during the second round of the 2017 presidential election that delivered President Emmanuel Macron to office.  “Today, we need a revolution. Not a revolution from war and violence but a revolution from heart and love and it is why we are here,” she said.

For many detractors, Macron symbolizes the European Union and a capital-markets approach to transforming an economy that has long provided generous social services that are undergoing cutbacks and austerities. 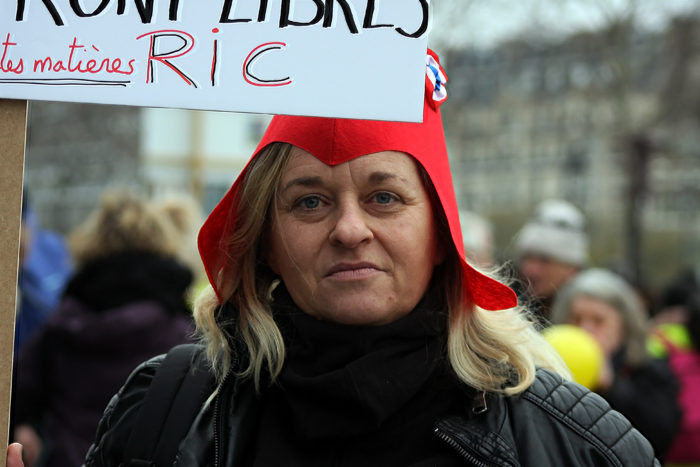 Anaë Piat, 45, spoke with Consortium News during the protests. “We organized as women because women are the one who give births, hoping that the future of our children would be the best as it could possibly be.”

Wearing a conical Phrygian, or liberty, cap with the tricolor, Piat said she was not protesting as a feminist, but as a Yellow Vest. “I’m here for all the Yellow Vests: men, women, children, retired. For all the people who are currently struggling.”

The protests began in November and just completed their eighth week.

An AP story described the movement as “losing wind with repeated violence at weekly demonstrations.” By contrast, The Wall Street Journal cast the large-scale demonstration on Jan. 5 as a sign of “staying power.”

Last week, a 33-year-old truck driver who was one of the first to call for nationwide protests was arrested, sparking outrage from leaders on different ends of the political spectrum about an abuse of power.  The French daily Le Figaro says the arrest may have reactivated the movement. 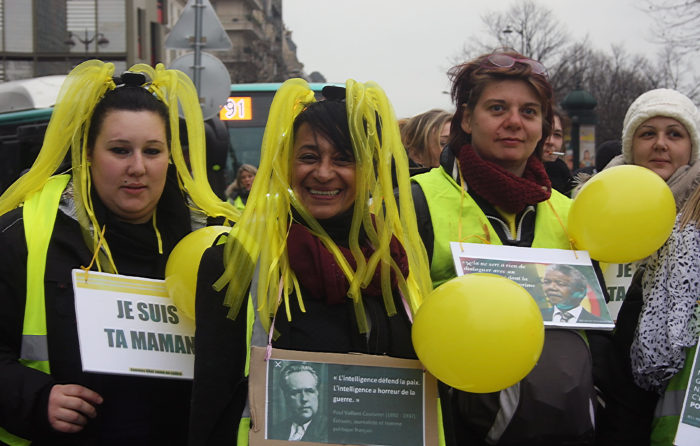 Poverty in Female Heads of Household

As has been noted since the start of the demonstrations, households headed by single women are among those having the hardest time meeting their living costs. Young people under 30 and single-parent families are the most affected by poverty, finds a 2018 report by L’observatoire des inegalités, an independent monitor of social conditions in France. About 35 percent of one-parent families live under the poverty line and 80 percent of that group are single mothers with children.

“Life is becoming more and more difficult, we can’t take children on a vacation and products covering basic needs are already too expensive,” said Piat, who is married and has three children.

The female protesters of all ages sang the French national anthem “La Marseillaise” and chanted anti-Macron slogans. They gathered Sunday morning on the steps of the Opera Bastille, which overlooks the symbolic Place de la Bastille, site of the Batille prison that was stormed by revolutionaries between 1789 and 1790.

In a phone interview before the demonstration, Magali Della Sudda, a political science researcher at the French National Center for Scientific Research, the largest governmental research organization in France, reflected on French women’s role in the country’s revolutionary history. “During the French revolution, women were here among the revolutionaries. They have been there throughout the 19thCentury, such as the Commune of Paris in 1871 and later on in the different social struggles of the inter-war period.”

Sudda said the women are more visible today in the Yellow Vest movement. “Because of the strong social dimension of the conflict and because the movement is outside all political structures and union organizations, people are forced to turn their attention to the ‘ordinary’ participants, including women.”

Sudda said women in the Yellow Vest movement span the social and economic strata. “We find nurses, care givers, women who work in schools with children,” she said.

Sudda points to the symbolic significance of the songs and chants heard during the women’s Yellow Vests protest on Sunday. “Women have always sung and vocalized with spirit in the demonstrations,” she said. “Their chants insist on solidarity, fraternity and what is done in common.”

← Everything That is Wrong with Mainstream Feminism
A Look Back at Clapper’s Jan. 2017 ‘Assessment’ on Russia-gate →