This year, U.S. Secretary of State Mike Pompeo made speeches about corruption and property confiscation in Iran that borrowed animating details from a skewed, 5-year-old story that is gaining influence, writes Ivan Kesic.

By Ivan Kesic
in Zagreb, Croatia
Special to Consortium News

When U.S. Secretary of State Mike Pompeo gave speeches about mega corruption in Iran this year, he did not cite a Reuters’ 2013 article or give credit to its three reporters; Steve Stecklow, Babak Dehghanpisheh and Yeganeh Torbati.

Instead he presented it as the kind of specialized knowledge that only a high-ranking official such as himself might be in a position to reveal. “Not many people know this,” Pompeo told an audience gathered last July at the Ronald Reagan Presidential Foundation and Library in Simi Valley, California, “but the Ayatollah Khamenei has his own personal, off-the-books hedge fund called the Setad, worth $95 billion, with a B.” Pompeo went on to tell his audience that Khamenei’s wealth via Setad was untaxed, ill-gotten, and used as a “slush fund” for the Islamic Revolutionary Guard Corps.

But a comparison between the 5-year-old Reuters article and Pompeo’s speech, which was lauded by The Wall Street Journal’s editorial board as “truth telling,” shows a type of symbiosis that could only help cast a backward glow over President Donald Trump’s move, last summer, to reimpose all sanctions lifted by the Obama’s administration’s historic nuclear deal with Iran. 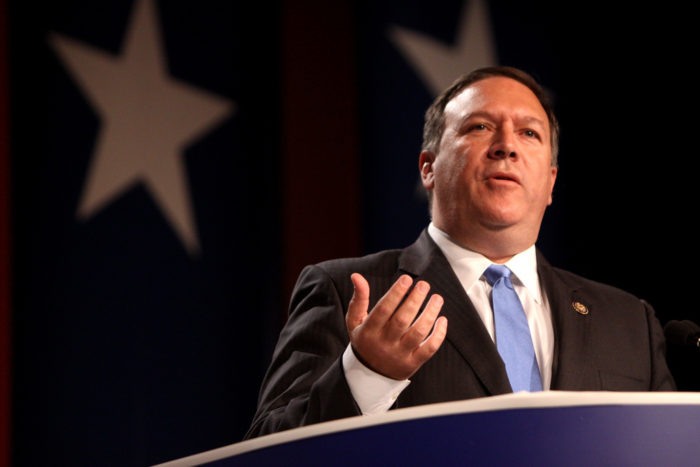 The imprint of the Reuters article on Pompeo’s speech was obvious in an anecdote about the travails of an elderly woman living in Europe. “The ayatollah fills his coffers by devouring whatever he wants,” Pompeo said. “In 2013 the Setad’s agents banished an 82-year-old Baha’i woman from her apartment and confiscated the property after a long campaign of harassment. Seizing land from religious minorities and political rivals is just another day at the office for this juggernaut that has interests in everything from real estate to telecoms to ostrich farming.”

The 82-year-old Baha’i woman living in Europe clearly matches Pari Vahdat-e-Hagh, a woman the Reuters team put at the very start of their extensive, three-part investigation. Here’s how the Reuters article begins: “The 82-year-old Iranian woman keeps the documents that upended her life in an old suitcase near her bed. She removes them carefully and peers at the tiny Persian script.”

While tapping the human-interest aspects of the story, Pompeo’s speech steered clear of some of the qualifications that the Reuters reporters and editors injected into their general profile of corruption. Pompeo referred to Khamenei using Setad as a “personal hedge fund,” for instance, suggesting personal decadence on the part of the Iranian leader. But the Reuters team was careful to note that it had found no evidence of Khamenei putting the assets to personal use. “Instead, Setad’s holdings underpin his power over Iran.” 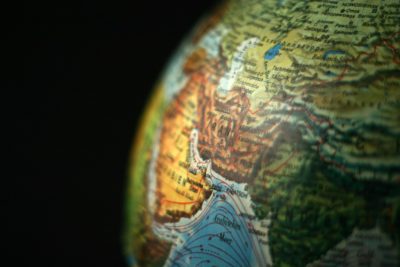 While stipulating that Khamenei’s greed was not for money but for power, the Reuters team neglected something of timely and possibly greater relevance. Earlier that same year the U.S. admitted its own longstanding greed for power over this foreign country.

In August 2013—three months before the Reuter’s article was published—the CIA finally admitted its role in the 1953 Iranian coup. “Marking the sixtieth anniversary of the overthrow of Iranian Prime Minister Mohammad Mosaddeq, the National Security Archive is today posting recently declassified CIA documents on the United States’ role in the controversial operation. American and British involvement in Mosaddeq’s ouster has long been public knowledge, but today’s posting includes what is believed to be the CIA’s first formal acknowledgement that the agency helped to plan and execute the coup,” the archive said.

This U.S. aggression led directly to two phases of property confiscation in Iran: first under the Shah and then under the religious fundamentalists who overthrew him. Unaccountably, however, the Reuters team ignored the CIA admission so relevant to their story.

To its credit, the Reuters article does allude, early on, to the two inter-related periods of property confiscation in Iran. “How Setad came into those assets also mirrors how the deposed monarchy obtained much of its fortune – by confiscating real estate,” the article says. But that sentence only functions as a muffled disclaimer since the team makes no effort to integrate that history into the laments of people such as  Pari Vahdat-e-Hagh, who emotionally drives the story.

For anyone familiar with the history of property confiscations in Iran, this ex-pat widow is a dubious figure. In the article, she claims that she lost three apartments in a multi-story building in Tehran, “built with the blood of herself and her husband.” She also says her late husband Hussein was imprisoned in 1981 because he began working for a gas company that had been set up to assist unemployed members of the Baha’i faith, and finally executed a year later.

The suggestion is that he was killed as part of a widespread persecution of Bahai’i followers.

What the Reuters reporters and editors omitted to mention, however, is that Hussein had been a  lieutenant in the military regime of Mohammad Reza Shah Pahlavi; the last shah of Iran who was overthrown by the uprising of 1979.

The Shah’s name has become so intertwined with UK and U.S. meddling in Iran that his role in setting a pro-western foreign policy is mentioned in the opening sentence of the Encyclopedia Brittanica entry on him. But the Reuters article places this mention at the end of the story, as deep background. By the time the team discloses the Shah’s penchant for confiscating property and flagrant corruption, the reader is in the third section of a three-part article. By that time, the elderly Vahdat-e-Hagh has come and gone. By then, she has cemented herself in the reader’s imagination as an unequivocal victim, even though some obvious questions about her should occur to anyone familiar with the country’s history.

How, for instance, did she and her husband come to own such significant property at the center of Iran’s capital city? Under the Pahlavi regime, most military personnel were provided with one apartment, not three. In the article, Vahdat-e-Hagh says that she and her husband obtained the property themselves, so presumably they did not inherit it. Could her late husband, Hussein, have been of high importance to the Shah’s U.S.-backed regime, which was famous for its lavish handouts to special loyalists? 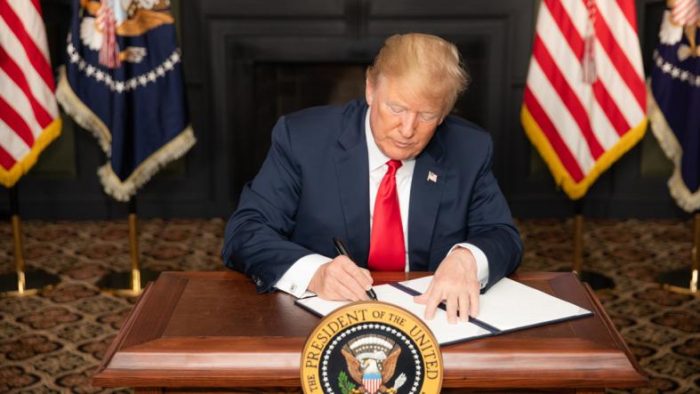 Such questions float over the article, not only about this particular subject, but many others who are presented to dramatize the ayatollah’s misdeeds. Several sources appear as human rights “experts” and lawyers. They are all Iranians living abroad and many have controversial biographical details that go unmentioned. There are similar well-known credibility issues with people who are introduced as respectable scholars and politicians.

The article offers the story of another aggrieved Baha’i family without ever mentioning how such people, in general, had lost property during the Shah’s White Revolution of 1963 which was intended to weaken those classes that supported the traditional system, primarily landed elites.

One obvious problem with the article is the distance of the three Reuters journalists from the scene of their story. They are based in New York, London and Dubai and do not reveal their information-gathering methods about Iran, a country that admits very few foreign reporters. So far, Yeganeh Torbati, the reporter who presumably wrote the first, human-interest part of the story, has not responded to a message to her Facebook account seeking comment. Nor has she responded to an email. Torbati, now based in Washington, was based in Dubai in 2013.

In the years since its publication, the Reuters article has been bubbling up in book citations. Suzanne Maloney mentioned it in her 2015 book “Iran’s Political Economy since the Revolution” as did Misagh Parsa in “Democracy in Iran: Why It Failed and How It Might Succeed” published in 2016.

This year Pompeo relied on it in four speeches. Two books published in 2018 place some weight on the Reuters article: “Challenging Theocracy: Ancient Lessons for Global Politics” by David Tabachnick, Toivo Koivukoski and Herminio Meireles Teixeira; and “Losing Legitimacy: The End of Khomeini’s Charismatic Shadow and Regional Security” by Clifton W. Sherrill.

The name Setad, which means “headquarters” in Farsi, has been kicking around Washington for five years, ever since the U.S. imposed sanctions on the group. In June of 2013, the U.S. Treasury Department issued a press release about Setad and its subsidiaries, with a long list of Persian-named properties that were managing to avoid UN sanctions imposed on the country’s business dealings as a means of discouraging Iran’s enrichment of nuclear-weapon grade uranium.

The report was the first piece of important follow-up journalism on the U.S. Treasury press release. But in one key piece of wording, editors and reporters almost seem to be straining to move their story ahead of the government’s rendition, to the primary position it now holds in Google search-terms.

“Washington,” according to the article, “had acknowledged Setad’s importance.” Acknowledged? By journalistic conventions that Reuters editors would certainly know, an acknowledgement indicates a reluctant admission, something a source would rather not reveal. Five months earlier, however, the Treasury Department sounded eager to call attention to Setad as “a massive network of front companies hiding assets on behalf of … Iran’s leadership.”

For hardliners on Iran, the U.S. Treasury press release was important fodder. But it lacked the human drama necessary to stir an audience against the current regime.  When the Reuters article came along, with all its historical omissions, it filled that gap.

Ivan Kesic is a Croatia-based freelance writer and open-source data analyst who has contributed to “Balkans Post” & “Sahar Balkan.” He worked as a writer at the Cultural Center of Iran in Zagreb from 2010 to 2016.