The U.S. continues to support the dictatorship of Saudi Arabia—as a key ally—even after the horrific murder of Jamal Khashoggi and the horrendous five-year bombing campaign on Yemen, writes Ann Wright.

By Ann Wright
in Istanbul
Special to Consortium News

Killing is not new for Saudi Arabia. While the world’s media has been focused on the horrific murder and dismemberment of Saudi defector Jamal Khashoggi in the Saudi Consulate in Istanbul the Saudi’s horrendous five-year bombing campaign on Yemen has been overshadowed.

This bombing has killed over 16,000 people, destroyed water and sewage infrastructure, left one million people with cholera and created a naval blockade that has starved 13 million of the most vulnerable: children and the elderly. The United States facilitates the bombing by selling weapons to Saudi Arabia, refueling Saudi bombers and providing intelligence reportedly to decrease the number of civilian casualties, which it appears it has not done.

Outside the Crime Scene

On Oct. 13, just after midnight, after the closing ceremonies of the conference I was attending in Istanbul, I travelled to the Saudi Consulate to stand in vigil for the disappearance and, believed at that time to be the probable murder of Khashoggi. I was also there to acknowledge the catastrophic Saudi war on Yemen and U.S. complicity in that war.

The barricades set up by police were shining in the lights from the street lamps and from the spotlight that the Saudi Consulate had outside its now-infamous front door.

No Istanbul police nor consulate security guards were visible. The street was eerily silent. Barricades blocked traffic. “POLIS” signs hung on the barricades. None of the daytime activity from domestic and international television crews or print journalists was happening. The Saudi consul-general’s home, next door to the consulate (where it has now been reported Khashoggi’s body may be buried), was dark. 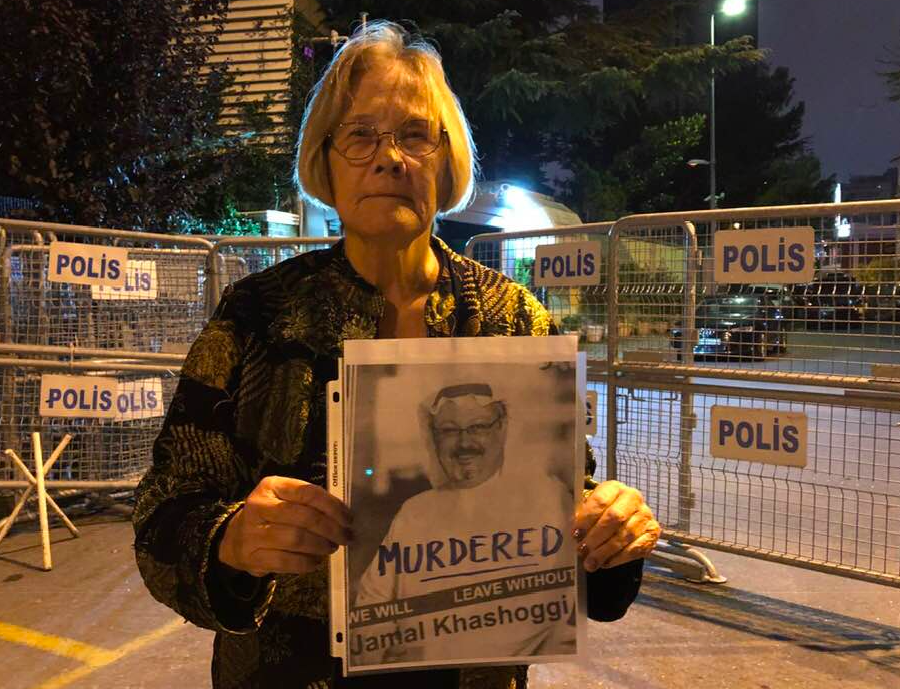 The author in Istanbul. (Ann Wright)

New friends from Istanbul whom I met at the conference, accompanied me.  They had been to many vigils at the consulate in the past 10 days.

As we stood at the barricades, lights from a car in an alley flashed on, and several men emerged. I thought that we were going to have some sort of interaction with consulate guards or Istanbul police, but when TV cameras followed the men out of the car, we realized they were journalists. They said they have a 24-hour stakeout on the door of the consulate.

The journalists became interested that I was a former U.S. diplomat and asked my opinion of what was happening. I told them that I knew what the journalists were reporting about the disappearance of Khashoggi.

However, I mentioned violent actions have been associated with diplomatic facilities in the past. U.S. government personnel assigned to U.S. embassies, or using a U.S. embassy as diplomatic cover, had been a part of rendition, torture and deaths of people the U.S. alleged were part of terrorist activities after Sept. 11, 2001. Six days after the 9/11 attacks, President George W. Bush signed a covert memorandum that authorized the Central Intelligence Agency (CIA) to seize, detain and interrogate suspected terrorists around the world.

U.S. Embassy personnel arranged for the flights of U.S. government or private aircraft to pick persons up from one country and “render” them to other countries where they were tortured in “black sites.” Recently, a citizen’s commission in North Carolina published its report, “Torture Flights: North Carolina’s Role in the CIA Rendition and Torture Program,” that documented the use of private, U.S.-government contracted jet aircraft owned by Aero Contractors. Their flights originated from small, private airports in North Carolina with destinations all over the world to deliver alleged suspects. The report says the CIA abducted and imprisoned at least 119 individuals before the practice was officially ended and repudiated by Presidential executive order in 2009 during the Obama administration.

According to the report:

Many of the prisoners were taken to CIA “black sites,” where they experienced beatings, prolonged stress positions, temperature extremes, long-term isolation, various water tortures, mock executions and sexual abuse. In violation of international law, the CIA transported some prisoners to foreign custody where they were subject to torture and abuse. Kidnapping, torture and secret detention occurred without respect for victims’ innocence or guilt and absent any legal process for them to contact their abductions.

One of the U.S. government employees who was deeply involved in the rendition and torture during this period was CIA station chief Gina Haspel, now the director of the CIA. She flew to Istanbul on Oct. 22 ominously to represent the Trump administration during the Turkish investigation into the death of Khashoggi.

A few days before she arrived, on Oct. 19, the Saudi government finally acknowledged that Khashoggi died in the Saudi Consulate in Istanbul, claiming his death was the result of a fight that broke out between him and the 15 Saudi government officials, including four members of the Royal Guard and members of the Saudi Air Force and Army, who had flown into Istanbul on Oct. 2 and who left later in the day.

The audio that the Turkish government says it has includes recorded cries of Khashoggi as he was dismembered while still alive. The audio, which has not be released, reportedly captured the words of Salah Muhammad A. Tubaigy, chief of forensic evidence in the security division of the Saudi interior ministry, who was cutting him apart.  He supposedly heard to tell the others in the room, the consul’s study, to “Put on earphones and listen to music.”

The latest information leaking from the Turkish government indicates that the dismemberment of Khashoggi was filmed and Skyped to Crown Prince Mohammed bin Salman’s senior aide, Saud al-Qahtani, who has since been reportedly sacked from his position. Al-Qahtani was reportedly Mohammad bin Salman’s right-hand adviser/enforcer in the kidnapping and interrogation of Lebanese Prime Minister Saad Hariri and of the detention and shakedown of many wealthy Saudi elite in the Ritz-Carlton Hotel in Riyadh.

Other than offering mild condolences to Jamal Khashoggi’s family, the Trump administration has slowly indicated concern about what happened in the Saudi diplomatic compound. But in a recent campaign stop, Trump applauded the actions of an official who “body-slammed” a journalist, and recall that in a Feb. 17, 2017, tweet, President Trump called the media “the enemy of the people.”

Journalists I spoke with in Istanbul cited President Trump’s comments on the U.S. press as one of the causes of the impunity of authoritarian governments to jail critical journalists, though such arrests certainly predate Trump’s presidency.  Turkey has had more imprisoned journalists than any other country, according to the Committee to Protect Journalists.

Istanbul is filled with journalists who are exiled from their countries for their views on authoritarian regimes—Saudi Arabia, Egypt, Iraq, Syria, Libya, Somalia, Yemen. Journalists that I spoke with in Istanbul are fearful that the authoritarian governments from which they fled may attempt to silence their dissent by violent means such as the Saudi government used against Jamal Khashoggi.

Istanbul lets Middle Eastern-exiled journalists report from Turkey, but it is ironic that since the failed coups in July 2016, the Turkish government has jailed more than 150 Turkish journalists on charges of terrorism offenses for articles or social media posts. President Erdogan’s administration has shut down more than 180 media outlets, putting around 2,500 journalists and media workers out of work.  On the World Press Freedom index, Turkey is 157 out of 180 countries.  Of all the imprisoned journalists worldwide, one-third are in Turkish prisons. 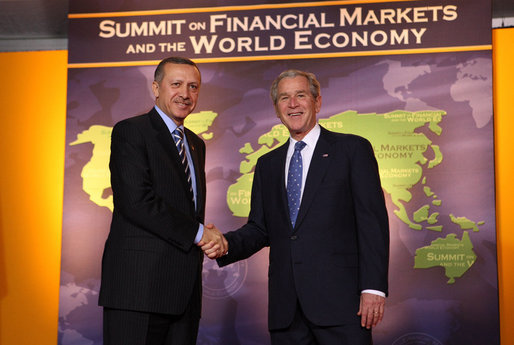 Some members of the U.S. Congress are calling for the Trump administration to distance itself from the Saudi regime due to the murder of Khashoggi and take serious steps, including stopping weapons sales and sanctions. Little connection is made to the horrific number of deaths in Yemen from Saudi and U.S. bombings, with the exception of Sen. Bernie Sanders’ reintroduction of Senate Joint Resolution 54, which calls for the end of refueling and intelligence sharing after Congress reconvenes (and hundreds more Yemenis have been killed).

As the Saudi regime murders in its own country, its diplomatic missions in Turkey and through its proxy militias in Syria, Iraq, and other countries, the U.S. wrongly continues to support this dictatorship—as a key ally of the United States.

Ann Wright served 29 years in the U.S. Army/Army Reserves and retired as a colonel.  She was also a U.S. diplomat and was in U.S. embassies in Nicaragua, Grenada, Somalia, Uzbekistan, Kyrgyzstan, Sierra Leone, Micronesia, Afghanistan and Mongolia. She resigned from the U.S. government in March 2003 in opposition to the lies the Bush administration was stating as the rationale for the invasion, occupation and destruction of Iraq. She is the co-author of “Dissent: Voices of Conscience.”