It is sobering to think that Dan Ellsberg, and other serious thinkers, look to Consortium News for professional journalism and analysis, says Ray McGovern.

From the desk of Ray McGovern:

Dan Ellsberg met me at the entrance to the Berkeley theater a half-hour before the Berkeley premier of The Most Dangerous Man in America in 2009. As we compared notes on a couple of the main issues of the day, he made a point of asking me, twice, to pass along to Bob Parry, the late founder and editor of this site, his thanks for Consortium News. When Dan turned to go up on stage to introduce the documentary, he dropped a manila folder crammed full of papers. Bending down to pick them up, he whispered, “Ray, these are recent Consortium News articles. I print out the ones I want to go back and read again; these are from the last couple of weeks.” 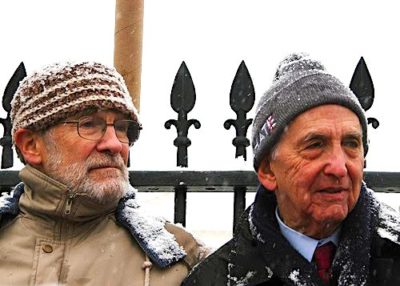 McGovern and Ellsberg protesting outside the White House in 2010.

I was reminded of this last week when I spent several hours with Dan on the West Coast. He was as sharp and inquiring as ever; this time, though, there was a lightness in his step missing in previous years. No longer hanging around his neck is the albatross of an unfinished life’s work – Dan’s crie de coeur. The albatross flew off last December when Bloomsbury published The Doomsday Machine: Confessions of a Nuclear War Planner. Consortium published an excerpt earlier this year.

With unparalleled experience and insight, Dan warns of the danger of “near-term extinction” resulting from our own “inventions and proclivities.” It is sobering to think that Dan, and other serious thinkers, look to Consortium News for professional journalism and analysis on how acute that danger is today. I see in this a solemn charge for us to keep on keeping’ on.

Ray McGovern works with Tell the Word, a publishing arm of the ecumenical Church of the Saviour in inner-city Washington.  He was an Army officer and a CIA presidential briefer, and is co-founder of Veteran Intelligence Professionals for Sanity (VIPS).

24 comments for “Ray McGovern on Daniel Ellsberg and Consortium News”