After Donald Trump nominated Brett Kavanaugh for the Supreme Court, Trump and the GOP leadership mounted a full-court press to ram through his confirmation before October 1, the first day of the Court’s new term, for five good reasons, says Marjorie Cohn.

The Republican Party and Donald Trump wanted Brett Kavanaugh on the U.S. Supreme Court before the November 6 midterm elections because if the Democrats had achieved a majority in the Senate, there may not have been sufficient votes to confirm him.

But the real hurry to get Kavanaugh confirmed had more to do with the several cases on the Supreme Court’s docket: Republicans are hoping to ensure the outcome of several hot-button cases, including those involving double jeopardy, immigration, age discrimination and the Endangered Species Act. Moreover, there is the possibility that the Supreme Court could also decide to take up additional cases affecting gerrymandering, gay and transgender rights, and the separation of church and state.

Below is an in-depth explanation of the top five reasons why the GOP rushed to confirm Kavanaugh in time for him to affect these cases currently on the Supreme Court docket.

Potentially most consequential for Trump is the case of Gamble v. US, which could affect his ability to pardon his associates, and even himself. On June 4, 2018, Trump tweeted, “I have the absolute right to PARDON myself.” 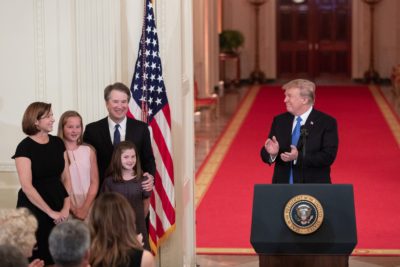 The pardon power, located in Article II, section 2 of the Constitution, says, “The president … shall have power to grant reprieves and pardons for offenses against the United States, except in cases of impeachment.” It limits the president’s pardon power to federal offenses.

In Gamble v. US, the justices will decide whether prosecuting a person in both state and federal courts for the same crime violates the Double Jeopardy Clause of the Fifth Amendment to the Constitution, which states, “No person shall … be subject for the same offense to be twice put in jeopardy of life or limb …”

For 150 years, the Supreme Court has held that state and federal courts are separate sovereigns, so a person can be prosecuted in both jurisdictions. After the police officers who beat Rodney King were acquitted in state court, they were tried and convicted in federal court.

If the Court follows its long-standing precedent, Trump could exercise his pardon power in federal proceedings but not in subsequent state proceedings for the same offense. Even if Trump were to pardon Paul Manafort, who was convicted of fraud in federal court, New York and Virginia state prosecutors could still bring charges against him.

It is not settled whether a sitting president can be indicted for a criminal offense. A presidential self-pardon is unprecedented. But if Trump were charged in a federal prosecution and he endeavored to pardon himself, the state of New York could then file criminal charges against him regarding the same matter. Under current law, Trump would be powerless to pardon himself in the state case.

If the justices narrow the scope of the Double Jeopardy Clause, however, state authorities would not likely be able to file criminal charges after Trump had exercised his pardon power in a federal case regarding the same matter.

Kavanaugh has said a sitting president should not be “distracted” by having to answer to a civil or criminal case, notwithstanding the Court’s ruling in Clinton v. Jones. He has demonstrated extreme deference to presidential power and would likely vote to limit the criminal exposure of Trump and his associates.

The justices will decide in Nielson v. Preap whether the government can detain immigrants for the duration of their deportation proceedings, without a hearing, because they have past criminal records.

In Garza v. Hargan, Kavanaugh wrote in dissent that the majority was creating “a new right for unlawful immigrant minors in US government detention to obtain immediate abortion on demand.” He would have imposed an even longer waiting period on a 17-year-old undocumented immigrant who had fulfilled all state requirements to secure an abortion.

Kavanaugh voted in Agri Processor v. NLRB to annul the results of a union election, charging it was “tainted” by immigrants’ votes.

And in Fogo de Chao v. Department of Homeland Security, Kavanaugh ruled against granting special visas to Brazilian workers in cases where US workers could perform the same jobs.

Kavanaugh would likely vote to uphold mandatory detention of immigrants in the pending case.

In Mount Lemmon Fire District v. Guido, the Supreme Court will determine whether the Age Discrimination in Employment Act applies to state and local employers who have less than 20 employees.

After the Mount Lemmon Fire District in Arizona laid off John Guido and Dennis Rankin, the district’s two oldest employees, the Equal Opportunity Employment Commission (EEOC) concluded that the district had engaged in employment discrimination. The Ninth Circuit Court of Appeals agreed with the EEOC, but since there is a split of authority among the courts of appeals on the parameters of the Age Discrimination in Employment Act, the Supreme Court agreed to hear the case.

Kavanaugh’s employment decisions favor employers over employees. He would likely rule against Guido and Rankin in the case pending before the Supreme Court. 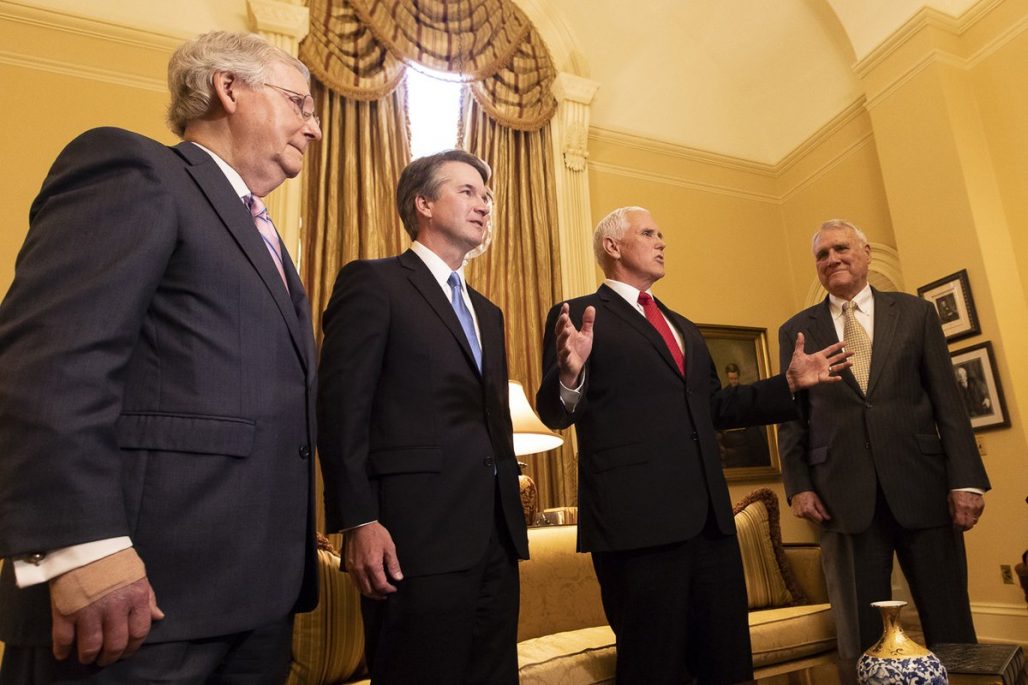 The GOP: A protected species. (Office of the Vice President)

The first case argued before the Supreme Court on October 1 was Weyerhaeuser Co. v. US Fish and Wildlife Service. It pits the fate of the dusky gopher frog — an endangered species — against private property rights. The case also raises the issue of when courts should defer to rulings of government agencies.

Under the Endangered Species Act, the US Fish and Wildlife Service is charged with identifying species that are endangered and designating “critical habitats” that are “essential for their conservation.”

In this case, the Service designated private property in Louisiana as a “critical habitat” for the endangered frogs. The land is owned by a group of companies, including Weyerhaeuser, which holds a long-term timber lease for the entire area. The designated land contains ephemeral ponds the frogs require in order to breed, even though they don’t live there now. The designation could limit the development of the land and result in a substantial loss of profits, as the companies would be required to replace existing trees with different species, cease timber management activities, and permit the land to be managed and populated with frogs.

Courts that have given deference to agency interpretations ensured essential protections, including deferring to:

– The Department of Labor’s interpretation of portions of the Black Lung Benefits Act that make it easier for coal miners afflicted with black lung disease to receive compensation; and

– The EPA’s revision of regulations under the Toxic Substances Control Act that provide more protection from exposure to lead paint.

Kavanaugh favors narrowing Chevron deference. He would likely rule against the frogs and in favor of the property owners.

5) Additional Cases on Gerrymandering and More

Kavanaugh’s record on voting rights does not augur well for his willingness to limit gerrymandering that restricts voting rights.

And Kavanaugh consistently scorns the separation between church and state.

Anthony Kennedy, whom Kavanaugh would replace, wrote the Court’s landmark opinionsupholding consensual homosexual conduct and same-sex marriage. During his confirmation hearing, Kavanaugh refused to say that Obergefell v. Hodges, in which the Court upheld the right of LGBTQ folks to marry, was correctly decided.

Republicans knew Kavanaugh would provide a reliable vote against immigrants, workers, voters, and gay and transgender people. He would deliver a dependable vote for employers, private property and church-state bonding. The GOP can also rest assured that Kavanaugh will do his best to immunize Trump from criminal liability and enable him to continue their mean-spirited, right-wing agenda.

For these reasons, Trump and the Republicans wanted Kavanaugh to join the Supreme Court immediately.

Marjorie Cohn is professor emerita at Thomas Jefferson School of Law, former president of the National Lawyers Guild, deputy secretary general of the International Association of Democratic Lawyers and an advisory board member of Veterans for Peace. The editor and contributor to The United States and Torture: Legal, Moral, and Geopolitical Issues, Cohn testified before Congress about the Bush interrogation policy.