Senator Elizabeth Warren was pushed to her limit at the National Press Club, entrapped by a system she says she wants to debate, but clearly can’t, as Sam Husseini explains.

Senator Elizabeth Warren at the National Press Club in Washington on Tuesday launched into a blistering attack on unfettered corporate power in America but waffled when asked about military spending and Israel’s recent brutal reaction to Palestinian resistance.

She pilloried former Congressman Billy Tauzin for having done the pharmaceutical lobby’s bidding by preventing a bill for expanded Medicare coverage to include a program to negotiate lower drug prices. “In December of 2003, the very same month the bill was signed into law, PhRMA — the drug companies’ biggest lobbying group — dangled the possibility that Billy could be their next CEO,” Warren said.

“In February of 2004, Congressman Tauzin announced that he wouldn’t seek re-election. Ten months later, he became CEO of PhRMA — at an annual salary of $2 million,” Warren said. “Big Pharma certainly knows how to say ‘thank you for your service.'” 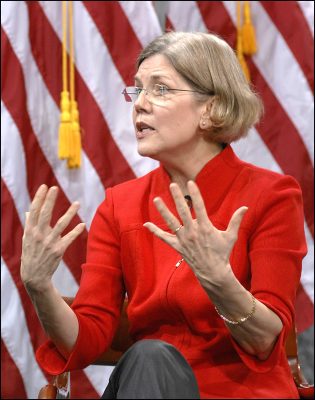 Warren: What does she want? (Wikimedia Commons)

Alexandria Ocasio-Cortez, the Democratic progressive who shocked the party by upsetting incumbent Congressman Joe Rowley in a New York primary election in June, had been mentioned earlier in the press conference. So I asked Warren if she agreed with Ocasio-Cortez who has proposed “slashing the military budget to help pay for human and environmental needs.” I also asked Warren if she would consider introducing and sponsoring [a version of] Rep. Betty McCollum’s (D-MN) bill on Palestinians children’s rights in the Senate?

I now sit on Armed Services and I have been in the middle of the sausage making factory on that one. And that has pushed me even more strongly in the direction of systemic reforms. I want to be able to have those debates. I want to be able to get them out in the open and talk about these poor issues that affect our government, affect our people. I want to be able to debate them on the floor of the senate. I want to be able to do amendments on them. Right now the whole of big money over our government stops much of that. It chokes off much of the debate we should have. So I am going to give you a system-wide answer because I think that’s what matters here. This is not about one particular proposal, this is all the way across. How is it that we get the voices of the people heard in government instead of over and over the voices of the wealthy and the well connected. The voices of those with higher armies of lobbyists. So for me that’s what this is about.

It was a classic politician’s evasion of sticky questions. She tells us she’s on the inside, invoking the cliché of “sausage-making.” She says she wants to debate the system. But she says she can’t. Warren seems to be crying out, trapped as she is in the compromise of power.

We’ve been here before with would-be champions of the people who run up against the “system.”  I could not help but think of Bernie Sanders in his 2016 presidential run when he was remarkably vague on foreign policy.

It reached almost comical proportions when, during a CBS debate right after the November 2015 bombings in Paris, instead of answering a foreign policy question he pivoted back to income inequality. No doubt Sanders was treated unfairly by the Democratic Party and media establishments. But he was greatly diminished by not having serious foreign policy answers. 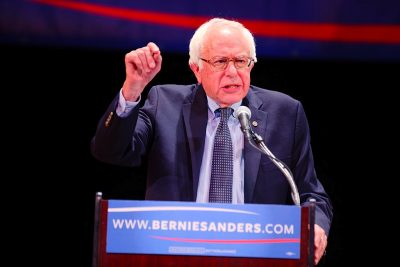 Sanders: Too little, too late.

Sanders began addressing foreign policy towards the end of his campaign and has since. But his answers are still problematic. At best they are too little, too late. Warren and other “progressive” candidates seem poised to follow suit.

What are Warren’s real goals? If she really wants to enact legislation to rein in corporations, why hasn’t she found a rogue Republican to work with? Questioned at the press conference by a New York Post reporter, Warren couldn’t name a single Republican she could pair with.

If her intent is to become the leading contender for the Democratic nomination will she simply play the sheepdog role of keeping the public on the “reservation” on behalf of the party’s elite?

“Inside Washington, some of these proposals will be very unpopular, even with some of my friends,” Warren said at the Press Club. “Outside Washington, I expect that most people will see these ideas as no-brainers and be shocked they’re not already the law.”

The public would probably also be shocked to learn that funding perpetual war, unauthorized by either Congress or the U.N., is already against the law.

130 comments for “The Limits of Elizabeth Warren”