Defenders of Israel are using flawed logic in trying to tar supporters of the age-old tactic of boycotts as anti-semitic, argues Lawrence Davidson.

If you search the topic boycotts on Google you immediately realize how historically common they are. There are a lot to choose from, and one of the first listed is the 1769 boycott instituted by the First Continental Congress against Great Britain over the issue of “taxation without representation.” That makes a boycott against a perceived oppressive power an integral part of American heritage.

As you move into the modern era, a reaction against racism also becomes a noticeable motivating factor for many boycotts. The Chinese instituted a boycott against the United States over the Chinese Exclusion Act of 1892 and 1904. Then, in 1933, the American Jewish Congress declared a boycott of Nazi Germany in protest to its racially motivated oppression of the German Jewish community. In the 1940s, Ghandi would encourage Indians to boycott imperial Britain. In the 1950s and 1960s, African Americans would boycott segregated institutions in the U.S. South. In the 1960s through the 1990s, much of the world would boycott South Africa over the issue of apartheid. And this is but a short list.

In 2005, 170 Palestinian civil society organizations, including unions, refugee networks, women’s organizations, and political parties, put out a call for a boycott of Israel. This was to be a non-violent effort to pressure the Zionist state to conform to international law and cease its oppression of the Palestinians. The call was also for divestment from Israel and all entities that assisted and profited from its behavior, as well as for eventual sanctions. This is known as the Boycott, Divestment and Sanctions campaign, or BDS for short. 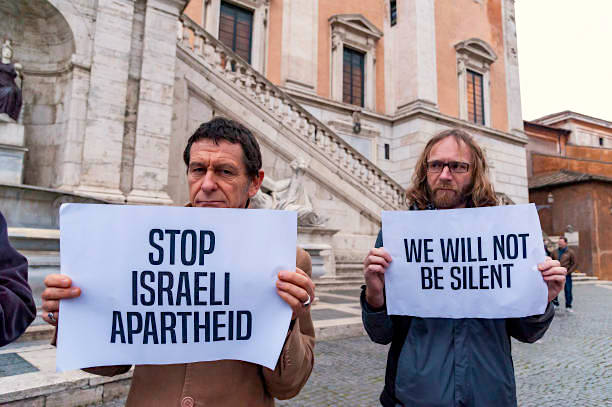 Protest in front of City Hall in Capitoline Hill on February 28, 2017 in Rome, Italy. The event organized by the Italian BDS movement. (Photo by Stefano Montesi/Corbis via Getty Images)

Even though Jews had suffered in the Holocaust during World War II and had used boycott as a weapon against their oppressors, the Israelis and their Zionist supporters have taken great umbrage at the call for boycott by the Palestinians. They see it as “anti-Semitic.”

For instance, in the U.S. the Zionist Anti-Defamation League has this to say about the BDS campaign on its website:

“Many of the founding goals of the BDS movement, including denying the Jewish people the universal right of self-determination … are anti-Semitic. Many individuals involved in BDS campaigns are driven by opposition to Israel’s very existence as a Jewish state. … And, all too often, BDS advocates employ anti-Semitic rhetoric and narratives to isolate and demonize Israel.”

This statement expresses the “official” Israeli/Zionist position, and at its core is a purposeful conflation of the Jewish people and the Israeli state. By insisting on this identification of Israel and all Jews, the Zionists are able to redefine anti-Semitism. Indeed, they take a very old and well-understood phenomenon and give it a radically new, and quite suspect, definition.

The traditional definition of anti-Semitism is a dislike of or bias against Jews by virtue of their imagined inherent “Jewishness.” Note that this is very different from objecting to, say, the criminal behavior of someone or some group that just happens to be Jewish. In the first case, it is “Jewishness” that you object to. That is anti-Semitism. In the second case, it is criminal behavior that you object to, regardless of whether the criminal is Jewish. That is not anti-Semitism.

However, by arbitrarily conflating all Jews with the Israeli state, the Zionists tell us that criticism or opposition to Israeli state behavior—even if that behavior is criminal—is anti-Semitic. This is because Israel stands in for all Jews. Thus, they redefine anti-Semitism in a way that allows Israel to sidestep all moral responsibility by turning the argument around and pointing fingers at their critics. For instance, do you object to Israel’s ethnic cleansing of Palestinians? Well, for the Zionists the issue is no longer the criminal nature of ethnic cleansing, but the alleged anti-Semitism of those criticizing that behavior.

Let’s consider this Zionist maneuver against the following background: 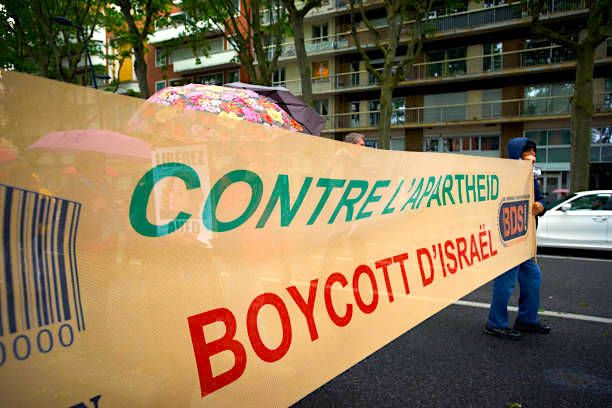 Toulouse. France. May 12, 2018. (Photo by Alain Pitton/NurPhoto via Getty Images)

The Zionist gambit is actually an act of obfuscation using a logical fallacy called the “straw man.” It is “based on giving the impression of refuting an opponent’s argument, while actually refuting an argument that was not presented by that opponent. One who engages in this fallacy is said to be attacking a straw man.”

Thus, as suggested above, every time someone charges that the state of Israel’s treatment of the Palestinians is, say, in violation of international law, the issue of the validity of this charge is replaced by “straw man,” which in this case is alleged anti-Semitism of the critic. It is to be noted that in most of these confrontations only one side has any real evidence.

The critic might point to evidence of ethnic cleansing, property destruction and land theft, and various policies that have, according to David Harel, the vice-president of the Israel Academy of Science and Humanities, turned Israel into an “apartheid” state. On the other side, however, those using the straw man fallacy often have no objective evidence at all. Their claim of anti-Semitism is based on their own idiosyncratic definition of this prejudice. Making a case in this way also involves “begging the question” or “circular reasoning,” which are also erroneous ways of arguing. This occurs when a person “assumes as evidence for their argument the very conclusion they are attempting to prove.”

The great 18th-century Scottish philosopher David Hume once remarked (referring to the subject of miracles) that “those with strong religious beliefs are often prepared to give evidence that they know is false, with the best intentions in the world, for the sake of promoting so holy a cause.” We can ascribe this sentiment to the true believer of just about any belief system deemed “holy” in one sense or another. Certainly those with strong Zionist beliefs would qualify—though I am pretty sure theirs are not “the best intentions in the world.”

Hume goes on to say that “people are often too credulous when faced with such witnesses, whose apparent honesty and eloquence … may overcome normal skepticism.” Thus, the faulty logic of the Zionist attack on the BDS campaign has not prevented partial success. This is particularly true in the halls of power where faulty logic is combined with Zionist lobby power that can help or hinder the politician’s reelection. Here Zionist power and influence are being used to actually outlaw BDS. To date some twenty-five U.S. states have tried to do this even though, as an infringement of free speech, their efforts are clearly unconstitutional. In this case lobby power proves more compelling than either the U.S. constitution or logic.

Let’s end by quoting George Orwell. His experiences with the pervasive propaganda used by all sides just before and during World War II gave him “the feeling that the very concept of objective truth is fading out of the world. Lies will pass into history.” Such efforts have not stopped.

55 comments for “The Faulty Logic Behind the Attack on BDS”