Trump’s policies are shaping America’s relationship with the world in major ways even if those policies don’t exhibit a consistent strategy, observes Paul Pillar.

The urge within the commentariat to describe every president’s foreign policy in terms of some clearly defined doctrine is as strong as ever, but Donald Trump presents would-be doctrine-definers with perhaps their toughest challenge yet.

This observation is not by itself a criticism of Trump’s policies. Doctrine is overrated. Given the complexities of America’s relationship with the world and the multiplicity of U.S. interests involved, any set of policies that fits neatly into a simply defined doctrine is apt to be too simple to uphold those interests effectively. But Trump’s policies are shaping America’s relationship with the world in major ways even if those policies don’t exhibit the sort of consistent strategy worthy of the lofty term “doctrine”.

One recent attempt to define a Trump Doctrine was reported by Jeffrey Goldberg, who quotes a “senior White House official with direct access to the president and his thinking” as saying that there definitely is a Trump Doctrine, which is, “We’re America, Bitch”. That remark has some validity in that it reflects an attitude that many of Trump’s policies have exhibited. The remark is a crude synonym for assertive nationalism, a label that clearly applies to much of what Trump has said and done and which analysts of an earlier administration applied in more genteel form to the likes of Richard Cheney.

But as a broad description of Trump’s overall approach to the world, the concept falls short in not only precision but also direction. How can it be reconciled with Trump’s campaign theme of getting out of the sorts of costly and bloody foreign engagements that people like Cheney got the United States into?

Another recent effort at doctrinal labeling comes from Robert Kagan, who defines Trump’s foreign policy as being a “rogue superpower,” an approach Kagan describes as a “third option” that contrasts with both internationalism and isolationism. This concept accurately captures much of what Trump’s policies have been about, particularly a disdain for international rules and order and even efforts to undermine or destroy the rules. Other parts of Kagan’s picture and his applying of labels, however, are off the mark. His description of Trump’s policies as “pure realism” should make true realists cringe. 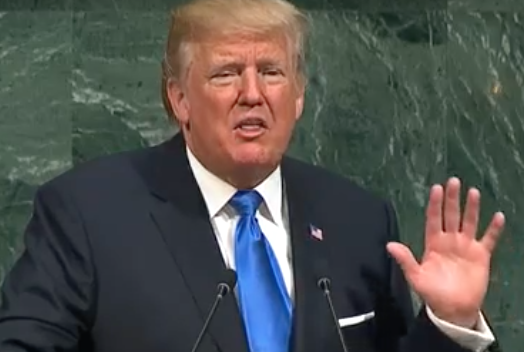 Trump lectures the world at the U.N. last September. (Screenshot from Whitehouse.gov)

Realism does not, as Kagan would have it, see international politics as nothing but a “struggle of all-against-all” in which allies and alliances are blithely blown off. The use of alliances, based on partially convergent interests, in balance-of-power politics is at the core of classical realism. And although the notion of all-against-all is found in much Trumpian rhetoric, it does not reflect the administration’s policy in the Middle East, with its rigid tying of the United States to Saudi Arabia and Israel.

Kagan also states, “The United States’ adversaries will do well in this world, for Trump’s America does not want war.” If “Trump’s America” refers to major trends in American public opinion that helped to put Trump into office, that statement is true. But as with much else with the first year and a half of Trump’s administration, there are disconnects between domestically-directed rhetoric and outwardly-directed policy.

It is hard to square Kagan’s comment with Trump’s appointment of uber-hawk John Bolton as national security advisor, or with the extent to which the administration already has used military force in Syria and in the name of counterterrorism elsewhere.

Conspicuous and consistent traits of Trump’s foreign policy do not involve the sorts of objectives or principles that customarily merit the term “doctrine”. The traits have major effects and the effects sometimes fall into discernible patterns, but the effects are not objectives of a coherent strategy. The most conspicuous trait of Trump’s policies has been to do the opposite of, and to try to destroy, anything significant that his predecessor accomplished. This trait is at the center of much of what Kagan’s “rogue superpower” has done—specifically, the rejection of important agreements on the environment, trade, and weapons proliferation.

But anti-Obamaism is entirely negative; it says nothing about what kind of world the United States is for and wants to build. Depending on the specific issues involved, it can take Trump in different directions from just tearing down multilateral agreements.

Self-promotion as a supposedly master deal-maker is another major characteristic of Trump’s approach to foreign policy. It is another trait that does not make for consistently applied foreign policy principles that could plausibly be described as a doctrine. Any sense of order and consistency gets lost, as individual deals are separately hyped or castigated depending on who reached them. Hence Trump’s self-congratulation for nuclear diplomacy with North Korea that already compares unfavorably with previous diplomacy with Iran that Trump has vociferously condemned.

Hardly unique to Trump is the influence on policy of those who helped to elect the president. Even setting aside the still-under-investigation Russia dimension of this subject, such influence in Trump’s case has been readily apparent—especially when comparing Trump’s earlier rhetoric with his later positions on matters involving Israel and the Gulf Arabs.

Related to such campaign indebtedness is the priority that Trump continues to give to playing to his domestic base and seeking applause lines at home. This habit has had significant effects on U.S. foreign relations, but again the effects have had little or nothing to do with any coherent vision of America’s place in the world. The United States is embarking on a trade war with China and Europe less because a trade war had a prominent place in someone’s foreign policy doctrine than because of applause lines that get applause due in large part to domestic economic dislocations tinged with xenophobia.

(A constant theme of Trump’s going back decades is that other countries have been taking advantage of America.)

A current example of the same phenomenon is how the pressure the administration has been feeling over its handling of child immigrants along the southern U.S. border has further poisoned U.S. relations with European allies—which, in any coherent foreign policy doctrine, ought to be two entirely unrelated subjects. Part of Trump’s response to the pressure has been to expound ever more forcefully about the supposed evils of immigration. This response has included an outburst about Germany that not only was factually false regarding crime but constituted an extraordinary effort to undermine the incumbent government of an important U.S. ally in favor of some of the more extreme elements in that government’s domestic opposition. 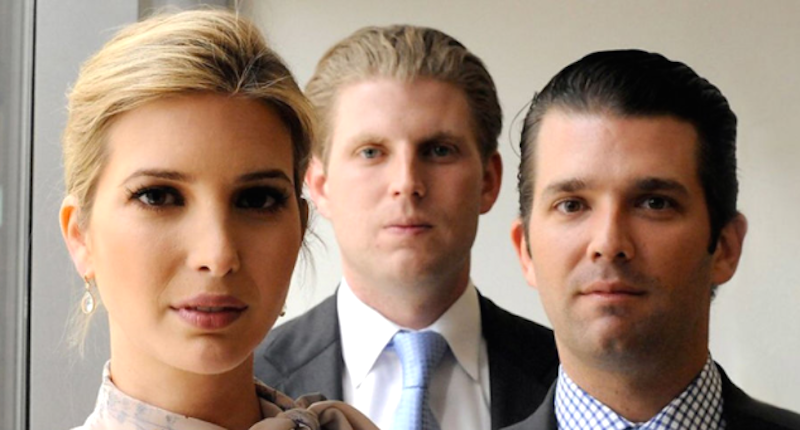 Finally, there is the possible influence on foreign policy of the private financial interests of Trump and his family. This subject so far involves a murky and incomplete picture with mostly anecdotal reporting and with many questions still under investigation. But given that this U.S. presidency, more than any other in recent decades, has unabashedly co-mingled public interests with private ones, the subject cannot be ignored.

The broader effects of all these aspects of Trump’s conduct of foreign policy do not represent objectives that flow from any foreign policy doctrine. Indeed, for the most part they are not even objectives. One such effect is a serious weakening of the North Atlantic alliance. Another is a reversal of any progress that the previous administration made (and it didn’t make much) in pivoting away from deep U.S. immersion in the conflicts of the Middle East. This pattern is illustrated by continued U.S. support for the highly destructive Saudi and Emirati intervention in Yemen, which recently expanded with an assault on the port of Hodeida.

The collective effect of the traits still leaves big uncertainties about some important questions, with different traits tugging in different directions. Prime among these is the future U.S. relationship with China—a clear vision of which ought to be part of any foreign policy doctrine worthy of the name. Trump’s initial steps regarding North Korea have been mostly to China’s liking and imply the forging of a cooperative relationship. But the trade war obviously points in the opposite direction.

One more generalization can be made about the overall effect that Trump’s approach probably will have on America’s place in the world and that involves a vocabulary often used in discussion of foreign policy doctrines. The United States will be more isolated than before.

Other states, whether friend or foe, will be less willing to bargain with the United States when it is governed by an administration that reneges on previous agreements and that, other governments believe, bargains in bad faith. Such mistrust impedes the reaching not only of the sort of multilateral agreements that Trump rejects but also the sort of bilateral agreements that he says he favors. To return to Kagan’s typology, Trump’s America is moving closer to isolationism—in diplomacy, if not in the use of military force—not because isolationism is part of any Trump Doctrine but because it is a byproduct of Trump’s way of doing business.

This article originally appeared in The National Interest.

Paul R. Pillar, in his 28 years at the Central Intelligence Agency, rose to be one of the agency’s top analysts. He is author most recently of Why America Misunderstands the World.

54 comments for “How Trump is Reshaping US Foreign Policy”