Retrospective: On this day three years ago Robert Parry, late founder and editor of this site, examined transparency in government and found that the Obama administration was among the most secretive and manipulative in modern times, tailoring what the public heard about foreign crises to what served his agenda.

In disclosing the deaths of two Western hostages in a U.S. drone strike on an Al-Qaeda compound, President Barack Obama said on Thursday that he had ordered the declassification of the secret operation because “the United States is a democracy committed to openness in good times and in bad.”

But the reality of the past six years has been that his administration has enforced wildly excessive secrecy, selectively declassified material to mislead the American people, and failed to correct erroneous information on sensitive international issues.

This failure to trust the people with accurate information has arguably done great harm to U.S. democracy by promoting false narratives on a range of foreign conflicts. With all its talk about “public diplomacy” and “information warfare,” the Obama administration seems intent on using half-truths and falsehoods to herd the people into a misguided consensus rather than treating them like the true sovereigns of the Republic, as the Framers of the Constitution intended with the explicit phrase “We the People of the United States.”

For instance, the Obama administration rushed to judgments on pivotal international events such as the Syrian-sarin case in 2013 and the Malaysia Airlines Flight 17 shoot-down over Ukraine in 2014 and then refused to update those assessments as new evidence emerged changing how U.S. intelligence analysts understood what happened.

Instead of correcting or refining the record and pursuing meaningful accountability against the perpetrators of these crimes the Obama administration has left outdated, misleading accusations in the public domain, all the better to fit with some geopolitical goals, such as delegitimizing the Syrian and Russian governments. In other words, providing the American people with substantive updates on these atrocities and advancing the cause of justice take a back seat to keeping some geopolitical foe on the defensive.

In both the Syrian-sarin case and the MH-17 shoot-down, I’ve been told that U.S. intelligence analysts have not only refined their understanding of the events but to a significant degree reversed them. But the original assessments, which were released nine and five days after the events, respectively, were still being handed out to the press many months later. [See Consortiumnews.com’s “A Fact-Resistant Group Think on Syria” and “US Intel Stands Pat on MH-17 Shoot-down.”]

What is perhaps most troubling in both cases, however, is that the killings involved serious crimes against humanity and the perpetrators have not been identified and brought to justice. Whatever new evidence U.S. intelligence has collected could help track down who was responsible but that doesn’t appear to be a priority for President Obama.

In the MH-17 case, the timetable for the next scheduled release of information is on the first anniversary of the shoot-down, which occurred on July 17, 2014. Given that the shoot-down, which killed 298 people, should be an active criminal investigation, it makes little sense to delay disclosures for something as artificial as an anniversary, giving whoever was responsible more time to slip away and cover their tracks. 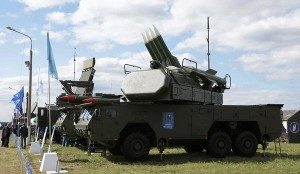 A photograph of a Russian BUK missile system that U.S. Ambassador to Ukraine Geoffrey Pyatt published on Twitter in support of a claim about Russia placing BUK missiles in eastern Ukraine, except that the image appears to be an AP photo taken at an air show near Moscow two years ago.

In the meantime, the U.S. government continues to re-release its initial claims putting blame on foreign adversaries the governments of Bashar al-Assad and Vladimir Putin so the assumption may be drawn that the updated analyses go in different directions, possibly implicating U.S. allies, such as Turkey or Saudi Arabia regarding the sarin attack and elements of the U.S.-backed Ukrainian regime in the MH-17 case. Whatever the truth, however, it is hard to justify why the U.S. government has withheld evidence in these criminal cases, whoever is implicated.

Of course, double standards sometimes appear to be the only standards when the U.S. government is involved these days. When ethnic Russians in eastern Ukraine resist a coup that overthrew their elected president in 2014 and get some help from Russians next door the Obama administration and the mainstream U.S. news media decry “Russian aggression.”

On Wednesday, the Obama administration declassified its own claims that Russia had deployed air defense systems in eastern Ukraine and had built up its forces along the border with Ukraine, assertions that Russian officials denied, though those denials were not included in the article on Thursday by New York Times’ national security reporter Michael R. Gordon, who treated the allegations essentially as flat fact.

After citing some analysts musing about different explanations for Russian President Putin’s supposed actions, Gordon wrote, “Either way, the new military activity is a major concern because it has significantly reduced the amount of warning that Ukraine and its Western supporters would have if Russian forces and separatists mounted a joint offensive.”

Gordon then quoted State Department spokeswoman Marie Harf saying: “This is the highest amount of Russian air defense equipment in eastern Ukraine since August. Combined Russian-separatist forces continue to violate the terms of the ‘Minsk-2’ agreement signed in mid-February.”

Though Gordon included no Russian response to these charges, he did mention that Russia had complained about what Gordon called “a modest program” of 300 American troops in Ukraine training national guard units, a program that Russian officials said could “destabilize the situation.” Gordon wrote that the Obama administration, in response to this Russian complaint. “declassified intelligence describing a range of Russian military activities in and near Ukraine.”

But the intelligence appeared to be just U.S. accusations. In Kiev, U.S. Ambassador Geoffrey Pyatt tweeted about “the highest concentration of Russia air defense systems in eastern Ukraine since August” and illustrated his claim by showing a photo of a BUK anti-aircraft missile system. But the photo appeared to be an Associated Press photograph taken of a BUK system on display at an air show near Moscow two years ago, as the Russian network RT noted.

Gordon, who co-authored with Judith Miller the famously bogus Times’ exposÃ© in 2002 about Iraq procuring aluminum tubes for building nuclear bombs, has been an eager conduit for U.S. government propaganda over the years, including his role last year in a page-one Times scoop that cited State Department and Ukrainian government claims about photographs that proved Russian troops were in Ukraine but turned out to be false. [See Consortiumnews.com’s “NYT Retracts Russian Photo Scoop.”]

Yet, while Russia is not supposed to mind the forced ouster of a friendly government on its borders or the presence of U.S. and NATO forces supporting the successor regime, a more sympathetic view is taken when Saudi Arabia intervenes in Yemen’s civil war by bombing the country indiscriminately, reportedly killing hundreds of civilians and devastating ancient cities with priceless historical sites that date back thousands of years.

“They’re worried about their own security and of course we’ve supported them,” stated White House communications director Jen Psaki. “But, again, we’re trying to redirect this to a political discussion here.” (The New York Times article about this “Saudi resolve” with a similarly understanding tone toward the Saudis was co-authored by Gordon.)

This pattern of perverting U.S. intelligence information to bolster some U.S. foreign policy agenda has become a trademark of the Obama administration along with an unprecedented number of prosecutions of U.S. government whistleblowers who release real information that exposes government wrongdoing or waste. This double standard belies President Obama’s assertion that he values openness in a democracy.

Investigative reporter Robert Parry broke many of the Iran-Contra stories for The Associated Press and Newsweek in the 1980s. You can buy his last book, America’s Stolen Narrative, either in print here or as an e-book (from Amazon and barnesandnoble.com). You also can order Robert Parry’s trilogy on the Bush Family and its connections to various right-wing operatives for only $34. The trilogy includes America’s Stolen Narrative. For details on this offer, click here.

← Scarier than Bolton? Think Nikki for President
How Many Millions Have Been Killed in America’s Post-9/11 Wars? Part 3: Libya, Syria, Somalia and Yemen →

41 comments for “On ‘Openness’ and Deceit”