The Austin bomber offered a frightening reminder how vulnerable the U.S. is to asymmetrical attacks – something that should be kept in mind as U.S. leaders exacerbate tensions with Russia and other targeted regimes, writes David Hamilton.

Austin’s bomber revealed many things. Despite being inexperienced and not terribly bright, he terrorized a major city, stretched police resources to their limit, significantly disrupted commerce and grabbed worldwide headlines. He doubtless also caused the CEOs at UPS and Fedex to have nightmares. 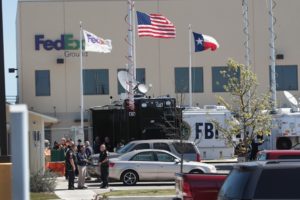 FBI, ATF and local police investigate an explosion at a FedEx facility on March 20, 2018 in Schertz, Texas. (Photo by Scott Olson/Getty Images)

Try to imagine what a very smart person with some professional training in explosives, ideological motivation and a strategic plan might be able to do, especially with a small and skilled support group.

The crucial factor is that significant targets are so limitless and far-flung that they simply cannot be secured. Forget blowing up random people while on surveillance cameras, what about those electric power lines crossing the desert to the far horizon? The power grid is flagrantly exposed. What about flyovers?  Or the petro-chemical plant sitting beside the ship channel? Any bridge? Or Edward Abbey’s idea of a boat bomb floated against Glen Canyon Dam? Our ubiquitous, complex and crumbling infrastructure and our open society provide unguarded targets ad infinitum.

The immutable vulnerability cannot be eliminated by military means. We cannot patrol below every power line and bridge. No border wall will matter, just another target. Besides, our principal enemies are internal, not an alien invasion. The Austin bomber was not a Russian.  Nor was Timothy McVeigh or the perpetrators at Parkland HS or at the Pulse nightclub or at the Mandalay hotel Las Vegas or at Sandy Hook Elementary, all terrorist attacks by white male Americans with no criminal record who probably considered themselves Christians.

There is no military means to fully guarantee our security. It is statistically irrefutable that having guns increases one’s likelihood of getting shot. Our safety will instead be primarily dependent on how we treat others, as human beings and as a nation.

But there are those who are actively trying to convince us that Russia, among others, is our existential enemy and we should obsessively worry about them instead of the real factors affecting our lives.  These war mongers are thereby promoting a distraction from what is truly meaningful in the interest of winning our support for future U.S. aggressions, specifically war with Russia, Iran and Syria in Syria, U.S. instigation of regime change taken to its logical conclusion.  Considering the actors involved, at the end of that path could await mutual annihilation.

The essential issue is simply power; the ability to control others for one’s own advantage.  The US capitalist elite is trying desperately to maintain their post WWII crusade for world dominance in the face of other growing power centers and despite the ineptitude of the Insane Yellow Clown leading them.  They are particularly alarmed over the growth of Russia and China, their developing alliance and their expanding influence and stature worldwide relative to the U.S.

We might reasonably ask why the US doesn’t settle for a multi-polar world of mutually respectful global citizens.  The answer would unfortunately be that doing so would be totally out of character for those who actually make the decisions in our country.  Old habits of asserting hegemony die hard.

Before we allow our government and its compliant media to cast some country into the role of being our adversary, we might wish to ponder just why that country is our existential enemy whose subjugation merits risking the annihilation of all past human achievement along with our progeny.

Want real security?  There is clearly one most effective way to get it.   Don’t make enemies.

Today, our “liberal” media heap daily scorn on Russia and its president Putin while slavishly befriending the autocratic religious fanatics that compose the Saudi monarchy.  How have I missed a comparable outpouring of disgust at Russian homophobia and the Saudi law allowing execution by stoning for “homosexual behavior”? Would one rather be gay in Moscow or Mecca?  Could the Saudi’s being annual multi-billion dollar benefactors of the owners of the US military-industrial complex be linked to the conscious campaign to convince us of the diabolical nature of all things Russian?

To be a peace activist at this time requires continuous pushback at the concerted propaganda campaigns perpetually being conducted in the U.S. corporate news media and among their collaborating politicians to demonize their next prospective victims; currently Russia, China, Iran, Syria, Afghanistan, Yemen, Venezuela, Cuba and North Korea along with other various non-state actors, usually Muslims or leftists.

Regardless of how reprehensible one considers the domestic policies of these “enemy” nation’s leaders, there is literally nothing worth risking Armageddon. Without complete nuclear disarmament, human survival requires that diplomacy take place. That requires talking to other nuclear powers in a non-adversarial manner, especially between the two nuclear super-powers who together possess over 90% of all such weapons.

63 comments for “Austin Bombings, Russophobia and the Law of Immutable Vulnerability”