The time for the followers of Jesus to publicly protest injustices such as wealth inequality is at hand, argues retired Baptist minister Rev. Howard Bess.

In about 30 CE, Jesus traveled about 70 miles south of his native Galilee to Jerusalem to celebrate the Passover. This trip is mentioned in Matthew’s, Mark’s and Luke’s Gospels, all of which describe Jesus’ entry into Jerusalem as the first event of a tumultuous week that ended with Jesus’ crucifixion as an insurrectionist and later with his resurrection from the dead. When scholars interested in studying the historical Jesus look for historical certainties in the gospel writings, they almost unanimously identify this trip to Jerusalem as a matter of history, not just tradition or fiction. 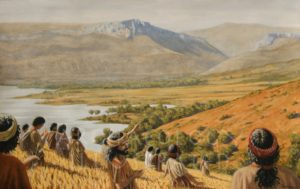 Scholars are not of one mind about the details of these three events. The three gospel writers obviously embellished their stories with fiction. There are things we know with reasonable confidence. We know that Jesus being greeted by multitudes in Jerusalem is not remotely possible. This was probably Jesus’ only trip to Jerusalem during the short years of his public ministry in Galilee. 70 miles is a long walk. He might have been known by Jerusalem’s Pharisees, but the Pharisees would have ignored him. Jesus’ entry into Jerusalem was more likely a very small political protest march, more like a form of street theatre.

The details of the story, i.e. children waving palm branches and Jesus riding a donkey in fulfillment of a non-existent Old Testament prediction, are more likely small parts of the process of turning the political nature of the Jesus movement into a new religion that glorifies the political leader. The reality is that Jesus was a religiously devout and practicing Jew, who was killed for his political activities. Those who want to look at the whole process should read Barrie Wilson’s book “How Jesus Became Christian.” The process of change has left followers of Jesus reciting the Apostles’ Creed that deifies Jesus and leaves what he said, taught and lived unsaid.  It left Jesus followers asking “what should I believe?” to the exclusion of “what should I be doing?”

On Palm Sunday, 2018, children will once again parade through church sanctuaries waving Palm branches or paper replicas in the celebration of the “triumphal” entry into the city of Jerusalem.  It is a tradition that seemingly will not go away. Once again nothing will be said from Christian pulpits about the horror of Roman rule. The Roman rulers were ruthless thieves of land and wealth. They made hard-working laborers into economic slaves. The Roman tyrants in the hinterlands of the Empire shipped stolen wealth back to Rome, where wealthy people had sumptuous living.

The Romans were masters of the vision of greatness. They called it Pax Romana. In fact the Romans had a vast propaganda program that justified the gap between the wealthy and the poor. It was unimaginable no matter what they called it. Jesus saw through all the ugliness, seeing it as a wholesale denial of justice. His entry into Jerusalem was the beginning of a week of protest.

Today, pastors of churches, who are well trained in high quality seminaries, know the context of the ministry of Jesus from Nazareth. Ministers by the tens of thousands know about the ruthless greed that drove the Romans. They know of the compromises that were being made by the priests of the Jerusalem temple. They know about the rage of Jesus at the injustices of the system. They know about the fraud of a triumphal entry but will say nothing. Instead, tradition will triumph once more and children will wave Palm branches once more.

If there is any time in the year when followers of Jesus should massively protest against the evils in our society, it is during holy week beginning with Palm Sunday.

Jim Wallace, editor of Sojourners magazine has chosen the April 2018 edition to call for a return to aggressive protest by followers of Jesus from Nazareth. He sees the disparities of the Roman Empire being repeated in America under the banner of Make America Great Again. For Wallace the time for the followers of Jesus to publicly protest is at hand. Protest marches against injustice are a part of our Jesus tradition.

In our America, protest marches have been used effectively to bring about change. The American master of the protest march was Martin Luther King Jr. When he led marches, he was using the tool of Jesus, the protest march. Many Christians kept advising King to back off from his protest marches. He kept on marching. His “Letter from Birmingham Jail” is one of the truly great literary pieces of our history. It was addressed to the clergy of Birmingham.  Protest marches are unsettling to the majority. They produce consequences that are not comfortable for the protesters. King was in a jail in Birmingham because of his non-violent protest marching. Jesus was killed because he protested.

Jim Wallace has been arrested and jailed 23 times because of his protests against injustice.

The tradition of celebrating Palm Sunday as a triumphal entry should cease. It needs to be replaced with protest marches against the abuse of power and injustice in all its forms. It is the message of Palm Sunday.