The declining human rights standards on display with the Haspel and Pompeo nominations are the latest in a long line of policy failures that include the Obama administration’s lack of prosecutions of Bush-era torture, Nat Parry notes.

President Donald Trump’s nominations of Gina Haspel to lead the CIA and Mike Pompeo to be America’s top diplomat are the latest indications of steadily eroding human rights standards in the United States and the rollback of the rule of law that has characterized U.S. counterterrorism policies since Sept. 11, 2001. 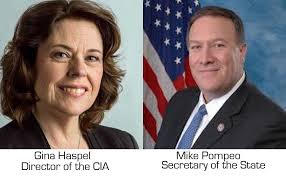 Haspel, a CIA operative who oversaw the torture of terrorism suspects at a secret prison in Thailand and then helped destroy tapes of the interrogations, and Pompeo, who has made statements in support of torture and mass surveillance, are both expected to be confirmed by the Senate with little fanfare.

After all, when Pompeo was nominated for his current post of CIA Director his confirmation sailed through the Senate on a vote of 66-32. This, despite what Human Rights Watch’s Maria McFarland Sanchez-Moreno called “dangerously ambiguous” responses to questions about torture and mass surveillance.

“Pompeo’s failure to unequivocally disavow torture and mass surveillance, coupled with his record of advocacy for surveillance of Americans and past endorsement of the shuttered CIA torture program, make clear that he should not be running the CIA,” Sanchez Moreno said in January 2017.

Shortly following Pompeo’s confirmation, his deputy director at the CIA was named as Gina Haspel, who “played a direct role in the CIA’s ‘extraordinary rendition program,’ under which captured militants were handed to foreign governments and held at secret facilities, where they were tortured by agency personnel,” the New York Times reported last year.

She also ran the CIA’s first black site prison and oversaw the brutal interrogations of two detainees, Abu Zubaydah and Abd al-Rahim al-Nashiri. In addition, she played a vital role in the destruction of interrogation videotapes that showed the torture of detainees both at the black site she ran and other secret agency locations. The concealment of those interrogation tapes violated both multiple court orders as well the demands of the 9/11 Commission and the advice of White House lawyers, as Glenn Greenwald has reported.

Despite these serious misgivings, Senate Minority Leader Charles Schumer (D-N.Y.) said he is not currently urging Democrats to oppose Pompeo’s nomination to be Secretary of State or Haspel’s nomination to lead the CIA. So much for the #Resistance.

The Democratic acquiescence follows a long pattern of tolerating human rights abuses and normalizing torture. When President Barack Obama declared that he wanted to “look forward, not backward,” and to close the chapter on the CIA’s torture practices under the Bush administration without allowing any prosecutions for crimes that were committed, he ensured torture would remain a “policy option” for future presidents, in the words of Human Rights Watch.

We began to see this play out during the Republican primary debates in 2016, when the GOP contenders were all jockeying for the pro-torture vote. At the time, Trump made clear his unambiguous support for the use of torture. When he was pressed on his statements about bringing back waterboarding and devising even more brutal torture methods, Trump decided to double down rather than backtrack.

On Feb. 7, 2016 candidate Trump appeared on “This Week” with George Stephanopoulos. “As president, you would authorize torture?” Stephanopoulos asked.

“I would absolutely authorize something beyond waterboarding,” Trump said. “And believe me, it will be effective. If we need information, George, you have our enemy cutting heads off of Christians and plenty of others, by the hundreds, by the thousands.”

When asked whether we “win by being more like them,” i.e., to mimic the tactics of Islamic State terrorists, Trump stated flatly, “Yes.”

“I’m sorry,” he elaborated. “You have to do it that way. And I’m not sure everybody agrees with me. I guess a lot of people don’t. We are living in a time that’s as evil as any time that there has ever been. You know, when I was a young man, I studied Medieval times. That’s what they did, they chopped off heads.”

“So we’re going to chop off heads?” Stephanopoulos asked.

“We’re going to do things beyond waterboarding perhaps, if that happens to come,” Trump replied.

Trump even insinuated that his competitor in the GOP race Ted Cruz was a “pussy” for hinting that he might show some degree of restraint in the use of torture. Alarmed, several human rights groups jumped in to remind the U.S. of its moral and legal obligations not to engage in sadistic and cruel practices such as waterboarding.

Amnesty International’s Naureen Shah issued a rebuttal to the debate over waterboarding, which she described as “slow-motion suffocation.” She pointed out the obvious that “the atrocities of the armed group calling itself Islamic State and other armed groups don’t make waterboarding okay.”

What the “debate” over bringing back torture highlighted, and what the current nominations of torture advocates to lead the State Department and CIA drive home, is why prosecutions of the Bush-era CIA torture program were essential, and why it was so damaging that the Obama administration shirked its responsibilities in this regard for eight years.

As human rights advocates have long maintained, prosecuting Bush administration and CIA officials involved with the torture of terrorism suspects in the post-9/11 period was needed so that torture would not be repeated in the future by subsequent administrations who may consider themselves above the law.

Indeed, this is precisely why there is a requirement under international law for allegations of torture to be investigated and prosecuted – so that torture does not become a policy option to be utilized or shelved depending on the political whims of the day.

This is a point that UN Special Rapporteur on Human Rights and Counterterrorism Ben Emmerson made following the release of the Senate’s torture report in late 2014. Senior officials from the Bush administration who sanctioned crimes, as well as the CIA and U.S. government officials who carried them out, must be investigated and prosecuted, Emmerson said.

“It is now time to take action,” Emmerson said on Dec. 9, 2014. “The individuals responsible for the criminal conspiracy revealed in today’s report must be brought to justice, and must face criminal penalties commensurate with the gravity of their crimes. The fact that the policies revealed in this report were authorized at a high level within the U.S. government provides no excuse whatsoever. Indeed, it reinforces the need for criminal accountability.”

International law prohibits the granting of immunity to public officials who have engaged in acts of torture, Emmerson pointed out. He further emphasized the United States’ international obligation to criminally prosecute the architects and perpetrators of the torture methods described in the report:

“As a matter of international law, the U.S. is legally obliged to bring those responsible to justice. The UN Convention Against Torture and the UN Convention on Enforced Disappearances require States to prosecute acts of torture and enforced disappearance where there is sufficient evidence to provide a reasonable prospect of conviction. States are not free to maintain or permit impunity for these grave crimes.”

Zeid Raad al-Hussein, the UN High Commissioner for Human Rights, said that it’s “crystal clear” that the United States has an obligation under the UN Convention against Torture to ensure accountability.

UN Secretary-General Ban Ki-moon expressed hope that the release of the torture report was the “start of a process” toward prosecutions, because the “prohibition against torture is absolute,” Ban’s spokesman said.

Needless to say, these appeals largely fell on deaf ears, with no criminal investigations launched whatsoever. Instead, the U.S. Congress responded with a symbolic “reaffirmation” of the ban on the torture – a largely redundant and unnecessary piece of legislation since torture has long been unambiguously banned under international law, the United States Constitution and U.S. criminal statutes.

For his part, Obama used the publication of the Senate report as an opportunity to tout the virtues of the United States, and actually praised the CIA for its professionalism in carrying out its responsibilities.

Following the publication of the Senate report, in a statement obliquely trumpeting the notion of “American Exceptionalism,” Obama said: “Throughout our history, the United States of America has done more than any other nation to stand up for freedom, democracy, and the inherent dignity and human rights of people around the world.” He went on to offer a tacit defense of the torture techniques while touting his own virtue in bringing these policies to an end.

“In the years after 9/11, with legitimate fears of further attacks and with the responsibility to prevent more catastrophic loss of life, the previous administration faced agonizing choices about how to pursue al Qaeda and prevent additional terrorist attacks against our country,” he said. Although the U.S. did “many things right in those difficult years,” he acknowledged that “some of the actions that were taken were contrary to our values.”

“That is why I unequivocally banned torture when I took office,” Obama said, “because one of our most effective tools in fighting terrorism and keeping Americans safe is staying true to our ideals at home and abroad.”

He went on to claim that he would use his authority as President “to make sure we never resort to those methods again.”

But clearly, by blocking criminal investigations into the policy’s architects, Obama did very little in a practical sense to ensure that those methods are not used again. And now that we are faced with the prospect of torture-tainted heads of the CIA and State Department, we are reminded once again of the importance of upholding the laws of the land.