The assumption underpinning Russiagate – that Vladimir Putin preferred Donald Trump over Hillary Clinton – is not supported by the facts, according to “Initial Findings” of the House Intelligence Committee, as Ray McGovern reports.

Let’s try to make this simple: The basic rationale behind charges that Russian President Vladimir Putin interfered in the 2016 U.S. election to help candidate Donald Trump rests, of course, on the assumption that Moscow preferred Trump to Hillary Clinton. But that is wrong to assume, says the House Intelligence Committee, which has announced that it does not concur with “Putin’s supposed preference for candidate Trump.” 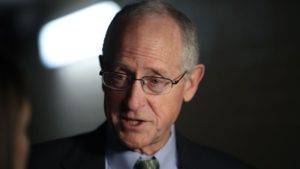 So, the House Intelligence Committee Republican majority, which has been pouring over the same evidence used by the “handpicked analysts” from just the CIA, FBI, and NSA to prepare the rump Intelligence Community Assessment (ICA) of Jan. 6, 2017, finds the major premise of the ICA unpersuasive. The committee’s “Initial Findings” released on Monday specifically reject the assumption that Putin favored Trump.

This puts the committee directly at odds with handpicked analysts from only the FBI, CIA, and NSA, who assessed that Putin favored Trump – using this as their major premise and then straining to prove it by cobbling together unconvincing facts and theories.

Those of us with experience in intelligence analysis strongly criticized the evidence-impoverished ICA as soon as it was released, but it went on to achieve Gospel-like respect, with penance assigned to anyone who might claim it was not divinely inspired.

Rep. K. Michael Conway (R-Texas), who led the House Committee investigation, has told the media that the committee is preparing a separate, in-depth analysis of the ICA itself. Good.

The committee should also take names — not only of the handpicked analysts, but the hand-pickers. There is ample precedent for this. For example, those who shepherded the fraudulent National Intelligence Estimate on weapons of mass destruction in Iraq 15 years ago were named in the NIE. Without names, it is hard to know whom to hold accountable.

Here’s the key ICA judgment with which the House committee does not concur: “We assess Putin, his advisers, and the Russian Government developed a clear preference for President-elect Trump over Secretary Clinton.” Not to be picky, but if House investigators have been unable to find enough persuasive evidence to convince them that “Putin’s supposed preference” was Trump, there is little reason to take seriously the ICA’s adolescent observations — like Putin held a “grudge” against Clinton because she called him nasty names — and other tortured reasoning in an Intelligence Community Assessment that, frankly, is an embarrassment to the profession of intelligence analysis.

I recall reading the ICA as soon as it was published. I concluded that no special expertise in intelligence analysis was needed to see how the assessment had been cobbled together around the “given” that Putin had a distinct preference for Trump. That was a premise with which I always had serious trouble, since it assumed that a Russian President would prefer to have an unpredictable, mercurial, lash-out-at-any-grievance-real-or-perceived President with his fingers on the nuclear codes. This – not name-calling – is precisely what Russian leaders fear the most.

Be that as it may, the ICA’s evidence adduced to demonstrate Russian “interference” to help Trump win the election never passed the smell test. Worse still, it was not difficult to see powerful political agendas in play. While those agendas, together with the media which shared them, conferred on the ICA the status of Holy Writ, it had clearly been “writ” to promote those agendas and, as such, amounted to rank corruption of intelligence by those analysts “handpicked” by National Intelligence Director James Clapper to come up with the “right” answer.

Traces of the bizarre ideological — even racial — views of Intelligence Dean Clapper can also be discerned between the lines of the ICA. It is a safe bet that the handpicked authors of the ICA were well aware of — and perhaps even shared — the views Clapper later expressed to NBC’s Chuck Todd on May 28, 2017 about Russians: “[P]ut that in context with everything else we knew the Russians were doing to interfere with the election,” he said. “And just the historical practices of the Russians, who typically, are almost genetically driven to co-opt, penetrate, gain favor, whatever, which is a typical Russian technique. So, we were concerned.”

What readers of the intelligence assessment might have taken more seriously was the CYA in the ICA, so to speak, the truth-in-advertising cautions wedged into its final page. The transition from the lead paragraph to the final page — from “high confidence” to the actual definition of “high confidence” is remarkable. As a reminder, here’s how ICA starts:

“Putin Ordered Campaign To Influence US Election: We assess with high confidence that Russian President Vladimir Putin ordered an influence campaign in 2016 aimed at the US presidential election, the consistent goals of which were to undermine public faith in the US democratic process, denigrate Secretary Clinton, and harm her electability and potential presidency. …”

But wait, the fair warning on page 13 explains: “High confidence … does not imply that the assessment is a fact or a certainty; such judgments might be wrong. … Judgments are not intended to imply that we have proof that show something to be a fact. Assessments are based on collected information, which is often incomplete or fragmentary, as well as logic, argumentation, and precedents.”

The “logic” referred to rests primarily on assumptions related to Trump’s supposed friendliness with Putin, what Clinton Campaign Manager John Podesta called in 2015 a “bromance.” It assumes that Trump has been more than willing to do the Kremlin’s bidding from the White House, whether due to financial relationships Trump has with the Russians, or because he “owes them” for helping him get elected, or whether he is being blackmailed by “the pee tape” that Christopher Steele alluded to in his “dodgy dossier.”

This is the crux of the whole “treason” aspect of the Russiagate conspiracy theory – the idea that Trump is a Manchurian (or as some clever wags among Russiagaters claim, a Siberian) candidate who is directly under the influence of the Kremlin.

Even as U.S.-Russian relations drop to historic lows – with tensions approaching Cuban Missile Crisis levels – amazingly, there are still those promoting this theory, including some in the supposedly “progressive” alternative media like The Young Turks (TYT). Following Putin’s announcement on developments in Russia’s nuclear program earlier this month, TYT’s Cenk Uygur slammed Trump for not being more forceful in denouncing Putin, complaining that Trump “never criticizes Putin.” Uygur even speculated: “I’m not sure that Trump represents our interests above Putin’s.”

This line of thinking ignores a preponderance of evidence that the U.S posture against Russian interests has only hardened over the past year-plus of the Trump administration – perhaps in part as a result of Trump’s perceived need to demonstrate that he is not in “Putin’s pocket.”

The U.S. has intensified its engagement in Syria, for one thing, reportedly killing several Russians in recent airstrikes – a dangerous escalation that could lead to all-out military confrontation with Moscow and hardly the stuff of an alleged “bromance” between Trump and Putin. Then there was the Trump administration’s recent decision to provide new lethal weapons to the Ukrainian military – a major reversal of the Obama administration’s more cautious approach and an intensification of U.S. involvement in a proxy war on Russia’s border. The Russian foreign ministry angrily denounced this decision, saying the U.S. had “crossed the line” in the Ukraine conflict and accused Washington of fomenting bloodshed.

On other major policy issues, the Trump administration has also been pushing a hard anti-Russian line, reiterating recently that it would never recognize Crimea as part of Russia, criticizing Russia for allegedly enabling chemical attacks in Syria, and identifying Moscow as one of the U.S.’s major adversaries in the global struggle for power and influence.

“China and Russia,” the administration stated in its recent National Security Strategy, “challenge American power, influence, and interests, attempting to erode American security and prosperity.” In the recently issued Nuclear Posture Review, the U.S. identifies Russia as a “contemporary threat,” and has a chapter outlining “A Tailored Strategy for Russia.” The document warns that Russia has “decided to return to Great Power competition.”

How does this in any way indicate that Trump is representing “Putin’s interests” above “ours,” as Uygur claims?

In short, there is no evidence to back up the theory that Putin helped Trump become president in order to do the Kremlin’s bidding, and no one pushing this idea should be taken seriously. In this respect, the Republicans’ “Initial Findings” – particularly the rejection of “Putin’s supposed preference for candidate Trump” have more credibility than most of the “analysis” put out so far, including the Jan. 6, 2017 ICA that has been held up as sacrosanct.

The irrepressible Congressman Adam Schiff, Ranking Member of the House Intelligence Committee, and his fellow Democrats are in high dudgeon over the release of the Committee’s “Initial Findings” after “only” one year of investigation.  So, of course, is NBC’s Rachel Maddow and other Russiagate aficionados.  They may even feel a need to come up with real evidence — rather than Clapperisms like “But everyone knows about the Russians, and how, for example, they just really hated it when Mrs. Clinton called Putin Hitler.”

I had the opportunity to confront Schiff personally at a think tank in Washington, DC on January 25, 2017. President Obama, on his way out of office, had said something quite curious at his last press conference just one week earlier about inconclusive conclusions:  “The conclusions of the intelligence community with respect to the Russian hacking were not conclusive” regarding WikiLeaks.  In other words, the intelligence community had no idea how the DNC emails reached WikiLeaks.

Schiff had just claimed as flat fact that the Russians hacked the DNC and Podesta emails and gave them to WikiLeaks to publish.  So I asked him if he knew more than President Obama about how Russian hacking had managed to get to WikiLeaks.

Schiff used the old, “I can’t share the evidence with you; it’s classified.” OK, I’m no longer cleared for classified information, but Schiff is; and so are all his colleagues on the House Intelligence Committee.  The Republican majority has taken issue with the cornerstone assumption of those who explain Russian “hacking” and other “meddling” as springing from the “obvious fact” that Putin favored Trump.  The ball is in Schiff’s court.

Last but not least, the committee’s Initial Finding that caught most of the media attention was that there is “no evidence of collusion, coordination, or conspiracy between the Trump campaign and the Russians.” This, of course, poured cold water on what everyone listening to mainstream media “knows” about Russian “meddling” in the 2016 election. But, in the lack of persuasive evidence that President Putin preferred candidate Trump, why should we expect Russian “collusion, coordination, conspiracy” with the Trump campaign?

Ah, but the Russians want to “sow discord.” Sounds to me like a Clapperism.

Ray McGovern works with Tell the Word, a publishing arm of the ecumenical Church of the Saviour in inner-city Washington.  During his 27-year career at CIA, he was Chief of the Soviet Foreign Policy Branch and preparer/briefer of the President’s Daily Brief under Nixon, Ford, and Reagan.  He is co-founder of Veteran Intelligence Professionals for Sanity (VIPS).