Applying the principle of cui bono – who benefits? – to the case of Sergei Skripal might lead investigators away from the Kremlin as the prime suspect and towards Western intelligence agencies, argues James O’Neill.

The suspected nerve agent attack upon former Russian intelligence officer Sergei Skripal, which also affected his daughter in the English city of Salisbury last Sunday, has given rise to too much speculation, too much hysteria, and too little analysis or insight. It has provided ammunition for the Russophobic Western media to make accusations that it was another example of Russia in general and Vladimir Putin in particular disposing of a supposed enemy of the Kremlin. 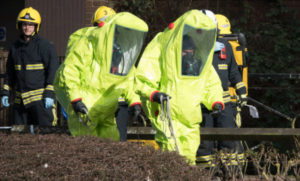 Sergei Skripal was found critically with his daughter on March 4 and were taken to hospital sparking a major incident in the UK. Photo: Getty

As with the Mueller investigation into the alleged Russian interference in the 2016 U.S. presidential election there are accusations with varying degrees of wildness, but little or no actual evidence that would get past first base in any independent court of law.

First, what are the known facts, only some of which have been accurately reported in the western mainstream media? The victim (assuming it was a deliberate attack upon him and his daughter) was formerly a Colonel in the Russian military intelligence service (the GRU). This is the largest of the Russian intelligence agencies and, as with its western equivalents, has a wide variety of functions, of which “spying” is only one.

In the early 1990s Skripal was recruited by an MI6 agent Pablo Miller, whom the British media declined to name. Miller was an MI6 agent in Tallinn, the capital of Estonia. Miller’s main task was recruiting Russians to provide information about their country to the British. An interesting fact, possibly coincidental, was that the MI6 officer under diplomatic cover in Moscow at this time was Christopher Steele. Steele was later to become better known as the principal author of the infamous Trump dossier.

When Steele returned to London, he ran MI6’s Russia desk between the 2006 and 2009. The information that Skripal disclosed would have been given to Steele, first in Moscow and later in London.

Skripal was arrested in 2004. In 2006 he was convicted of treason and sentenced to 18 years imprisonment. In 2010 he was released as part of a prisoner exchange deal with Russian spies in U.S. jails. He went to live in the United Kingdom where he has lived in supposed retirement ever since. Another interesting fact, although again possibly coincidental, is that Salisbury, where Skripal lived, is only about 12 kilometres from Porton Down, the U.K.’s principal research centre for nerve agents.

If the Russians had wanted to kill him, they had ample opportunity to do so during the years when he was imprisoned or the eight years he lived in retirement in Salisbury. If they did wish to kill him, it is not a very credible that they would do so very publicly and by a means that could not be bought off the shelf in the local pharmacy. The handling and the administering of these very dangerous substances require professional expertise. The obvious candidates for the attempted murder are therefore government agencies, but which government is the unanswered question.

This is where the facts become thinner, but the interesting connections of Skripal offer scope for some tentative hypotheses. While living in Salisbury, Skripal became friendly, according to a report in the UK newspaper the Daily Telegraph, with none other than the aforementioned Pablo Miller – whom the Telegraph declined to name but has since been identified on the web.

Miller is now working with a British security consultancy named Orbis Business Intelligence. Again according to the Telegraph, Miller’s association with this company has now been removed from Miller’s LinkedIn profile.

The obvious question again is: why do so now?

Orbis is the same private intelligence agency as that of Christopher Steele. It seems more than a mere coincidence that the same three men who had personal and professional links going back to the 1990s should have a continuing association at the same time as the Steele dossier was being compiled and later as the so-called Russiagate inquiry was imploding. Former FBI Director James Comey described the Steele dossier as “salacious and unverified” in a Senate hearing.

The former British ambassador Craig Murray has suggested on his blog that a motive for the attempted murder of Skripal and his daughter was to further promote the anti-Russian hysteria that inflicts the Western media and the body politic.

That is certainly plausible, and it has certainly been one of the consequences, as the abysmal coverage of the ABC among other outlets makes clear. But an alternative hypothesis presents itself in the light of the above facts, and this hypothesis has not even been mentioned, let alone discussed by our major media.

My admittedly speculative hypothesis (but I would argue, not an unreasonable one) is that Skripal was likely involved in the production of the Steele dossier. He was therefore in a position to offer potentially very damaging information into the circumstances of the Steele dossier. As noted above, that particular narrative has not only spectacularly collapsed, but the revelations reflect very badly on, among others, the U.S. intelligence community, the FBI, the Democratic National Committee, the Obama White House and the Clinton campaign.

In any major criminal enquiry one of the basic questions the investigation asks is: who had the means, the motive and the opportunity? Framed in that light, the Russians come a distant fourth behind the other prime suspects; the U.S. and U.K. intelligence agencies themselves, and those elements of the deep state that sought to prevent Trump winning, and subsequently to undermine his presidency. The primary motive being ascribed to the Russians is revenge for Skripal’s treachery more than a decade ago.

A second major question asked in any criminal investigation is cui bono – who benefits? It is difficult to perceive a credible argument that Russia is a beneficiary of Skripal’s poisoning.

Further support for the hypothesis that this was a false flag operation comes in this statement that British Prime Minister to Theresa May made to the UK Parliament. The statement was frankly absurd and could only have been made when the intention was to further demonize and punish Russia, rather than any attempt to establish the truth and apply ordinary principles of evidence and factual analysis.

May’s argument is thoroughly deconstructed on the Moon of Alabama website, which pointed out that Russia had destroyed all left over stocks from the Soviet Union’s chemical weapon program and does not currently produce chemical weapons. Further, there are any number of governments capable of carrying out the Salisbury attack. “If someone is run-over by a BMW is it ‘highly likely’ that the German government is responsible for it?” the Moon of Alabama asks.

The obfuscations of the British reinforce in the view that Skripal was dangerous to the anti-Trump forces and the authorities therefore sought to have them removed. There is ample precedent for such actions and those familiar with the “suicide” of Dr. David Kelly will recognize the parallels.

The chances of the truth emerging have become vanishingly small at the same time as a serious conflict with Russia becomes correspondingly greater.

James O’Neill is a Barrister at Law and geopolitical analyst. He can be reached at joneill@qldbar.asn.au.

178 comments for “The Strange Case of the Russian Spy Poisoning”