With the Russian president in the heat of a re-election campaign, Putin sat down to talk with NBC’s Megyn Kelly for an interview that enabled him to burnish his credentials to the Russian electorate, Ray McGovern explains.

Russian President Vladimir Putin’s team swept a doubleheader on March 1, with his mid-day speech claiming strategic parity with the U.S., and then the nightcap duel with NBC’s Megyn Kelly. Any lingering doubt that Putin is a shoo-in for another term as President is now dispelled. Putin might consider sending NBC a thank-you note. 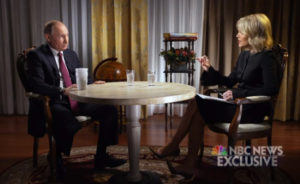 As I watched NBC’s special, “Confronting Putin,” Friday evening, I asked myself — naively — what possessed President Putin to subject himself again to what NBC calls a Megan Kelly “grilling,” replete with supercilious questions and less-than-polite interruptions, just nine months after his first such “grilling.” It then hit me that “grilling” is in the eye of the beholder.

Reviewing the original Russian tape of the interviews, it became clear that the tête-à-tête showed a Putin looking patiently but supremely presidential to Russian viewers who could see the whole interviews, not just the selective selected excerpts aired by NBC and “interpreted” by Russophobe-de-jour Richard Haas. (A close adviser to Secretary of State Colin Powell, Haas was among those who told him it was a swell idea to invade Iraq. When the anticipated “cakewalk” turned rather bloody, with no WMD to be found, Haas quit in July 2003 and became President of the Council on Foreign Relations where he is now well into his 15th year.)

Back to the Kelly-Putin pas de deux: At the March 1 interview the Russian President came out swinging. When Kelly asked the first time whether there is “a new arms race right now” after Putin’s announcement of Russia’s new strategic weapons, Putin reminded her that it was the U.S. that withdrew in 2002 from the Anti-Ballistic Missile Treaty of 1972. He added that he had repeatedly warned the Bush/Cheney administration that Russia would be forced to respond to the dangerous upset of the strategic equilibrium.

For some reason best known to Kelly and NBC, Kelly tried repeatedly to make the case that the U.S. decision to scrap the ABM treaty was a result of the terrorist attacks of 9/11, when, she said, “the United States was reassessing its security posture.”

“Complete nonsense,” was Putin’s reply (“polniy chush” in Russian — chush ringing with onomatopoeia and a polite rendering of “B.S.”). Putin explained that “9/11 and the missile defense system are completely unrelated,” adding that even “housewives” are able to understand that. He found occasion to use “polniy chush” (or simply “chush) several times during the interview.

It was no surprise that Kelly was armed with an array of questions about Russian meddling in the 2016 presidential election, and at the start of the March 2 interview asked “can we have that discussion now?” Putin said, “I think we must discuss this issue if it keeps bothering you.” And they were off on a feckless exchange with Putin replying calming to Kelly’s hectoring.

After one interruption, Putin said, “You keep interrupting me; this is impolite.” Kelly apologized, but dutifully went on to cover what seemed to be the remainder of her accusatory talking points. These included repeated insistence that Putin punish the click-bait farmers indicted by Special Counsel Robert Mueller for violating U.S. law.

No doubt fully briefed on the fact that Kelly sports a law degree, Putin asked, “Do you have people with legal training? … We cannot even launch an investigation without cause. … Give us at least an official inquiry with a statement of facts; send us an official paper.”

Kelly: “Isn’t it enough that U.S. intelligence agencies … and now a Special Prosecutor (sic) with a criminal indictment — is that not enough for you to look into it?”

Putin: “Absolutely not. If you do not have legal training, I can assure you that an inquiry is required for this.”

Putin: “Then you should understand that a corresponding official inquiry should be sent to the Prosecutor-General’s Office of the Russian Federation.”

The interview got testier toward the end, as Kelly tried to fit in all her questions, including the unsupported accusation that Syrian government forces are using chemical weapons and that Russia bears some responsibility for this.

During the back-and-forth on chemical weapons, Putin not only called the accusations against Russia a lie, but saw fit to refer to Colin Powell’s misbegotten speech at the UN just six weeks before the U.S./UK attack on Iraq: “It is a lie just as the vial with the white substance that allegedly proved that Iraq had weapons of mass destruction, which the CIA gave to the Secretary of State.”

For good measure, Putin threw in “Why did you encourage the government coup in Ukraine?”

Once again for the record, President Putin finished on a familiar note: “Russia and the U.S. should sit down and talk in order to get things straight. I have the impression that this is what the current President wants, but he is prevented from it by some forces.  We are ready to discuss any matter, be it missile-related issues, cyberspace, or counterterrorism efforts. … But the U.S. must also be ready.”

Sound presidential? Well, that, I’m now convinced, was the whole idea on Putin’s part. And Megyn Kelly was, in many respects, the perfect foil. The Russians also took the trouble to publish a full English transcript of the Kelly-Putin interviews of March 1 and 2 for English speakers who might be interested in what NBC left on the cutting room floor.

With less than a week before the Russian election, Putin is no doubt happy that Megyn Kelly stopped by, and that NBC provided such a well-timed opportunity to burnish his credentials for another term as President of Russia.

Ray McGovern works with Tell the Word, a publishing arm of the ecumenical Church of the Savior in inner-city Washington.  During his 27-year career as a CIA analyst, he was Chief of the Soviet Foreign Policy Branch and later conducted the morning briefings of The President’s Daily Brief to President Ronald Reagan’s most senior national security advisers.

← Gang of Four: Senators Call for Tillerson to Enter into Arms Control Talks with the Kremlin
The Strange Case of the Russian Spy Poisoning →