Exclusive: Italy’s elections this weekend represent a choice between the status quo, with risks of further austerity and structural reforms, or a wild card of populists who may lack competence and hold anti-democratic views, explains Andrew Spannaus.

Italy will hold elections on March 4, in which the essential choice for voters is to stay the course with the policies of the European Union, or to give populism a chance. The vote is the last in a year-long series of elections in major European countries, and the one where an anti-system party has the highest likelihood of breaking through. 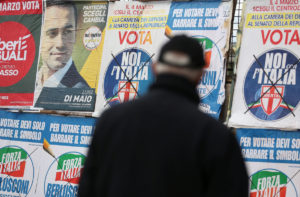 In 2017, populist sentiment helped outsiders increase their support in Holland, France, Germany and Austria, although none of them won any elections outright. This led European elites to breath a major sigh of relief, in the hope that the nationalist and populist broadsides against neoliberal E.U. economic policies and tensions around undocumented immigration, would not force an actual change in the institutions.

Geert Wilder’s Freedom Party in Holland came in a distant second, and Marine Le Pen of the National Front in France was soundly defeated in a run-off election with Emmanuel Macron. Yet the effects of the voters’ revolt that emerged forcefully in the 2016 Brexit vote and the U.S. Presidential elections were subsequently felt in two more unexpected locations: Germany and Austria.

In Germany the largest two parties, the Social Democrats and the Christian Democrats both lost a considerable number of votes. This drop, coupled with the rise of the anti-E.U. Alternative for Deutschland (Afd), had major repercussions, forcing Chancellor Angela Merkel to engage in months of talks for a new Grand Coalition with the Social Democrats. Before the election, almost all commentators had predicted an easy win for Merkel.

In Austria, the Christian Democrats People’s party came in first due in part to the tough-on-immigration stance of its young leader Sebastian Kurz. Along with the rise of the hardline Freedom Party, a new coalition government was formed that moved the country’s institutions significantly to the right.

Now it’s Italy’s turn. The populist revolt actually emerged here first, five years ago with the success of the Five Star Movement (M5S) founded by comedian Beppe Grillo. Based on the success of public rallies with the slogan “F.. you” to the “caste” that dominates the country’s political institutions, Grillo decided to take aim at the political institutions. In 2013, while refusing to go on television or radio to campaign, the M5S got about 25% of the national vote, leading to a large presence in the Parliament.

The movement’s members are generally young, “regular people” who just decided to fight against the corruption of the establishment, rather than candidates groomed to step into the country’s ruling class.

Today, the M5S is positioned to be the top vote-getter in this weekend’s elections, with recent polls showing its support at just under 30%. This is despite a concerted attempt to dampen its impact so as to ensure that it could never make it into the government. There are in fact many worries about the Movement, starting with a lack of experience and at times naive or contradictory policy positions. The biggest threat, however, has been seen as the call for a referendum on the European single currency, the Euro.

If there’s one thing the Eurocracy fears, it’s that voters will be given a chance to actually express their opinion on European economic policy, which has been dominated by the pro-finance and harsh austerity measures that Western populations have become disgusted with in recent years. The “responsible” politicians assure everyone that stopping or even slowing European integration would be a disaster, leading to depression and possibly even war. Yet they know well that when faced with the weakening of the middle class, stagnant growth and increasing social tensions due to immigration, a large percentage of voters blame the E.U. itself, which over the past two decades has gradually become the major legislative force in Europe, supplanting individual national governments.

The anti-populist imperative among Italian institutions has led establishment politicians to explicitly embrace the notion of staying the course. Representatives of the Democratic Party (PD) of former Prime Minister Matteo Renzi argue that things are finally getting better now, with economic growth slowly ticking up, and the country beginning to make up the ground lost in recent years.

Renzi has worn out his welcome with many Italians, though. He came to power in 2014 without being elected, through a shake-up within his own party. He subsequently spent almost three years as the head of the government, but ended up betting everything on a referendum to reform the Constitution in December 2016, which he lost badly.

Voters got tired of his personalization of politics, a mix of big talk and modest results, and naturally began to blame him for the country’s problems.

The result was a sort of Grand Coalition in which the PD and the center-right parties, led by Silvio Berlusconi’s Forza Italia, have together supported the government of current Prime Minister Paolo Gentiloni. Gentiloni is seen as competent and unassuming, and many would prefer him to stay on after the next elections.

Once again, though, there’s the problem of the voters. The elites hope to stay the course and work gradually to improve the country’s financial position and influence in Europe, but without challenging the neoliberal framework of the E.U. At this point the only way to obtain that result would be for nobody to win the election, thus allowing the centrist parties to again work together, while keeping out the supposed extremists on both the left and the right.

There are other parties, in addition to the M5S, that present themselves as anti-system. One is the Northern League, which has become more moderate since its pro-secession days, but still takes a hard line on immigration. Although the League is once again allied with Berlusconi’s Forza Italia, it is also heavily critical of the E.U.

A number of smaller parties also support anti-establishment positions, yet many won’t reach the minimum threshold for entering parliament.

The key factor in these elections is the electoral system itself. The fear of the M5S led the traditional parties to re-write the country’s election laws. The goal was to favor coalitions, rather than parties, avoiding the fragmentation of the vote and weakening the outsiders.

This goal may well be reached. Despite leading the polls, M5S has always gone it alone, rather than teaming up with others. Thus the center-right coalition is likely to have more overall votes, allowing the President of the Republic to task them with forming a government. This could once again result in collaboration with the Democrats, although probably with a different Prime Minister.

The result would be little change in the direction of the country. Some see this as positive, to avoid upsetting the system with radical proposals. Yet the risk here is that there will be little progress on issues such as inequality, unstable working conditions, and the perception of an out-of-touch, self-serving political class; all factors that could drive more social and political unrest in the future.

Another possibility would be a government anchored by the Five Star Movement and the League, an alliance many fear could emerge after the vote. This would be a true shock to the system, although probably less dramatic than many expect. The M5S candidate for Prime Minister, 31-year old Luigi Di Maio, has recently stepped up efforts to be considered credible, with meetings in the City of London and the announcement of unthreatening technocrats as potential government ministers. The move may calm fears in the institutions, but could cost him some support among the public.

The League is also taking pains to project a less threatening image. This includes distancing itself from extreme supporters on the right who have committed acts of violence towards immigrants, and engaged in physical clashes with anti-fascist protestors from the left.

Both parties have set out programmatic proposals that could force a reckoning with the march towards further European integration, such as separation between commercial banks and investment banks (inspired by the Glass-Steagall Act in the U.S.), along with calls for moving back towards national sovereignty. This forms a significant contrast with the centrist parties, that especially on the left, have adopted the line of “more Europe,” counting on voters to shy away from endorsing the path of open conflict with E.U. institutions.

Thus Italy’s elections reflect a significant, but complicated choice. On the one hand voters can seek not to rock the boat, but risk further austerity and structural reforms, while hoping for gradual progress. The other possibility is the unknown of populists who on the one hand promise a serious challenge to the failed policies of recent years, but on the other raise fears of incompetence, and also undemocratic attitudes from Europe’s past.