On February 13, the American intelligence community issued its Worldwide Threat Assessment for 2018. It is a frightening document to read, but perhaps not for the reasons you would expect. It is not frightening for the threat to America or the world that it reveals, but rather for its failure to hear or see what U.S. adversaries say or do. 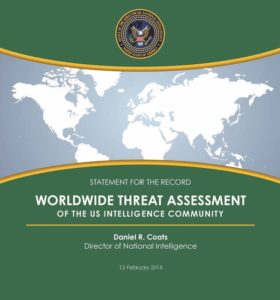 The Worldwide Threat Assessment is a regular ritual of the intelligence community in which it shares a declassified summary of threats to U.S. national security with Congress. The current assessment is published under the name of Daniel R. Coats, Director of National Intelligence. In theory, the assessment is the result of input from all of America’s sixteen intelligence agencies.

When it comes to North Korea and Iran, Congress exaggerates the truth, and, according to McGovern, Worldwide Threat Assessments serves the interests of those who benefit from exaggerating the truth. When Congress misleads the public on North Korea and Iran, it can claim support from the intelligence community by referencing the Threat Assessment. Neocons and irresponsible journalists can all quote its exaggerated and unsupported claims.

North Korea receives a scant three paragraphs. North Korea is identified as “a complex and increasing threat to U.S. national security and interests.” That threat cannot be removed by negotiations, it is always said, because North Korea is not willing to negotiate away their nuclear weapons program. That is the Trump administration’s justification for bypassing diplomacy or even talking with North Korea. That premise is asserted when the Worldwide Threat Analysis insists that “repeatedly stating that nuclear weapons are the basis for its survival, suggests that the regime does not intend to negotiate them away.”

But the intelligence community that can hear everything you say apparently cannot hear anything North Korea is saying. The North Koreans do say that their nuclear weapons program is the basis of its survival—a deterrent—but they have repeated many versions of the formulation that if the threat to its survival were removed, the deterrent to the threat would be removed.

It is well known – or would be well known if the essential role assigned to historians and journalists in a democratic society had not been appropriated by propagandists – that both times the United States seriously engaged in diplomatic discussions with North Korea – in 1994 and in 2005 – when the U.S. promised to stop threatening to attack North Korea, North Korea promised to stop its nuclear weapons program.

But, it is not necessary to appeal to distant history or to previous North Korean leaders. The same conditional formulation of abandoning the deterrent when the need for the deterrent is abandoned has been articulated repeatedly in very recent history.

North Korea’s Deputy Ambassador Kim In-ryong put it this way to UN Secretary-General António Guterres in August of 2017: “As long as the U.S. hostile policy and nuclear threat continue, the DPRK, no matter who may say what, will never place its self-defensive nuclear deterrence on the negotiating table.” Ju Yong Chol, a North Korean diplomat, expressed the formulation exactly the same way.

The same conditional North Korean formulation was expressed by Foreign Minister Ri Yong-ho in August of 2017. Ri said “We will, under no circumstances, put the nukes and ballistic rockets on the negotiating table. . . . unless the hostile policy and nuclear threat of the U.S. against the DPRK are fundamentally eliminated.” The next month, RI Yong-ho explained to the U.N. that its nuclear program is “to all intents and purposes, a war deterrent for putting an end to nuclear threat of the U.S. and for preventing its military invasion, and our ultimate goal is to establish the balance of power with the U.S..”

Most importantly, Kim Jong Un, himself, has also expressed this conditional formulation. Kim has stated that “Our final goal is to establish the equilibrium of real force with the U.S. and make the U.S. rulers dare not talk about military options.”

And despite the Worldwide Threat Assessment’s assurance that “the regime does not intend to negotiate [its nuclear weapons] away,” North Korea has not ceased to assure the world that it would. Investigative journalist Gareth Porter has recently reported on the possibility of an “intra-Korean” agreement between North and South Korea.

Kim Jong Un has responded in a way that suggests that this proposal satisfies the conditional formulation of North Korea’s terms. He called for a détente with South Korea and requested that South Korea “discontinue all the nuclear drills they have staged with outside forces,” meaning the U.S., and “refrain from bringing in nuclear armaments and aggressive forces of the United States.” Separating nuclear cooperation with the U.S. during the drills from the mere existence of drills, suggests, as Porter points out, “that Kim was signaling [his] interest in negotiating an agreement along the lines that [South Korea] had raised.”

Iran receives a lot more space in the Worldwide Threat Assessment than North Korea. And, although there are a number of incredible claims made in the Iran section, the most incredible claims about Iran are made in the section on terrorism. In that section, two unsupportable claims are stated as accepted fact. The first reverberates out of the Washington echo chamber: “Iran remains the most prominent state sponsor of terrorism.” The second is that “Lebanese Hizballah” – which is lumped together with Iran – “has demonstrated its intent to foment regional instability by deploying thousands of fighters to Syria”

The American intelligence agencies that can see everything apparently cannot see what they have long known. They know Iran is not “the most prominent state sponsor of terrorism” for two reasons: they know it’s not Iran, and they know who it really is.

This is not only because all of the recent attempts to link Iran to terrorism have failed, but because their own reports on terrorism don’t list Iran as the leading state sponsor of terrorism. The State Department’s Patterns of Global Terrorisms rarely identifies terrorist incidents as carried out on behalf of Iran. And, the most recent Global Terrorism Index from the Department of Homeland Security clearly states that, not Iran, but “ISIL, Boko Haram, the Taliban and al-Qa’ida” are the biggest terrorist threats. None of these four groups is Shiite and none is aligned with Iran, but combined they are “responsible for 74 per cent of all deaths from terrorism.” The Index also clearly identifies “ISIL,” not Iran “as the deadliest terrorist group.”

The intelligence community also knows that Iran is not the leading state sponsor of terrorism because it knows that Iran’s enemy, Saudi Arabia, is. As early as December of 2009, the State Department already knew that “Saudi Arabia remains a critical financial support base for al-Qaeda, the Taliban . . . and other terrorist groups.” A 2012 classified Defense Intelligence Agency Information Intelligence Report that made the rounds through the US intelligence community identified the “supporting powers” of ISIS to be “Western countries, the Gulf States and Turkey.”

In 2014, Vice President Biden admitted that “[O]ur allies in the region were our largest problem in Syria. . . . They poured hundreds of millions of dollars and tens, thousands of tons of weapons into anyone who would fight against Assad except that the people who were being supplied were Al Nusra and al-Qaeda and the extremist elements of jihadis.”

Point 4 of a memo written by Hillary Clinton on September 17, of the same year confesses that based on “western intelligence, US intelligence and sources in the region,” the U.S. knew that “the governments of Qatar and Saudi Arabia . . . [were] providing clandestine financial and logistic support to Isis and other radical groups in the region.” And, in 2015, President “Obama and other US officials urged Gulf leaders who are funding the opposition to keep control of their clients, so that a post-Assad regime isn’t controlled by extremists from the Islamic State or al-Qaeda.”

As the intelligence community cannot see what it has long been shown about terrorism, so it cannot see what it has long known about Iran’s role in the region. Iran and Hezbollah are not “foment[ing] regional instability by deploying thousands of fighters to Syria.” Iran is in Syria to fight the Islamic State and al-Qa’ida. According to the very same Worldwide Threat Assessment, “Sunni violent extremists – most notably ISIS and al-Qa’ida – pose continuing terrorist threats to US interests and partners worldwide.”

Ever since Iran tried and failed to mediate the dispute in Syria in an attempt to avoid the conflict, Iran and Hezbollah have backed Assad against the Islamic State, al-Qa’ida and the other rebel forces. Iran’s role against destabilizing forces in the region has not been a trivial one. Iran and Hezbollah have played a crucial role in defeating the rebels. For many people who are being threatened by al-Qa’ida and the Islamic State, Iran has surpassed the United States as their most important ally.

And it is not like the authors of the Worldwide Threat Assessment don’t know this. Ayatollah Khamenei has authorized his top commander to coordinate military operations with the U.S., and the Israeli media reported in 2014 that Iranian F-4 Phantoms that have bombed Islamic State targets were “most likely” working in “coordination with the U.S. military.” Patrick Cockburn has suggested that advances by Iranian-controlled Shia militias against the Islamic State on the ground have been made possible by coordination with U.S. airstrikes on Islamic State positions.

On both Iran and North Korea, the Worldwide Threat Assessment is a terrifying document to read – terrifying for the incompetence it reveals. The best briefing that the U.S. intelligence community can offer Congress is an assessment based on incomplete information and logical inconsistency. The ears of America cannot hear what North Korea is saying; the eyes of America cannot see what Iran is doing.

← The War Against Alternative Information
Italy’s Choice: Shock or Stagnation →

71 comments for “North Korea, Iran and U.S. Intelligence that Neither Hears Nor Sees”