It is no secret that the second most powerful politician in the State of California, Senate President Pro Tempore Kevin de León, is gearing up for a knock-down, drag-out primary fight with California’s senior Senator, Dianne Feinstein. Many feel it’s time for a changing of the guard and time for a person of color to represent the white minority state of California. 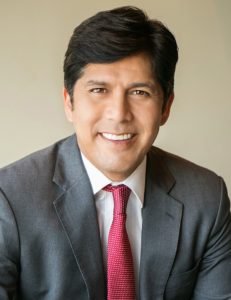 According to the Sacramento Bee, “As a child, de León spent time on both sides of the border, in Tijuana, Baja California, and Logan Heights in San Diego and identifies strongly with Mexican culture, though he doesn’t know where his grandparents are from.”

Before joining the Legislature, de León taught citizenship courses to immigrants. When he was sworn in as the 47th president pro tem of the California Senate in 2014, he became the first Latino to hold the position in more than a century.

Dennis Bernstein: With everyone watching Washington and wondering whether humane immigration reform can be passed, what are you expecting from Congress?

Kevin de León: These are very difficult times for many of us.  As a nation, we are grappling with the resurgence of ugly, hateful ideologies, including white supremacy, spewing from the highest levels of our federal government.  We are confronting something we have never had to come to terms with before in our political history.

In this context, the DACA program is really a low-hanging fruit.  Both Democrats, as well as Republicans among the national electorate, strongly support the Dreamers and DACA.  Why the issue should seem so complex is beyond me, except that there is political gamesmanship being played and the DACA beneficiaries have been taken as hostages.  I hope that a common sense settlement can be reached to give these young men and women the protections they deserve.  We need sensible comprehensive immigration reform for the estimated 11 million undocumented immigrants across the nation.

DB: What is your response then you hear that we have to do something about the problem of “chain migration”?

KdL: For me, “chain migration” is another word for family reunification.  The thesis behind the new term is quite pernicious.  Quite frankly, many of my close family members would not have been eligible to enter this country had there been a so-called “chain migration” clause in the country’s immigration policy.  If we’d had an immigration policy that was exclusively merit-based, I would never have become the leader of the California State Senate.

DB: In a press release toward the end of January you expressed your concern that Homeland Security was threatening to go after public officials if they continued to give their support to sanctuary cities.  Do you really think ICE will be out arresting officials like you?

KdL: These are extraordinary threats meant to intimidate and silence political opponents.  But threatening to weaponize federal agencies against Californians and their elected representatives will only strengthen our resolve.

DB: I’d like to change the subject for a moment.  This concerns the economy and the environment.  As you know, the Trumpites are gung-ho about offshore drilling.  This is a huge issue in the context of global warming and is pitting California against the rest of the country.

KdL: California is blessed with an incomparably beautiful and pristine coastline and we want to keep it that way for future generations.  In California we have some of the most progressive climate change policies in the entire world.  By the year 2030, we will be generating half of our electricity from renewable sources: wind, solar and geothermal.  We are investing in rooftop solar power in low-income communities.  We are looking for ways to provide electric vehicles to communities at the lowest economic strata.  We are doing this intentionally to make sure that we democratize our climate change benefits and offer relief to those communities that suffer disproportionately from the devastations of carbon dioxide and other emissions.

We are witnessing an administration that is trying to unilaterally, through executive action, unwind all of our progressive policies in a state like California.  We have created 500,000 jobs in the clean energy space alone.  That means there are ten times more clean energy jobs now in California that there are coal jobs in all of America!  No doubt about it, there is a battle brewing between Washington and California, and not just around the issue of immigration.

DB: We are seeing now the roll-out of the recreational marijuana industry, which is looking to become a huge cash crop.  What role do you see marijuana playing in the future of California?

KdL: Recreational use of cannabis is now the law of the land in California.  It has the overwhelming support of the people.  It is the responsibility of state and local government to roll out a regulatory framework that is responsible and fiscally prudent.  But it is now the law in California, and any threats from the Department of Justice–and specifically from Jeff Sessions, who has his mind fixated on a certain era in American history–will be met with legal resistance.