El Salvador is the latest country targeted by the Trump administration’s termination of protections for people under TPS, which provides relief for migrants fleeing humanitarian crises, reports Dennis J. Bernstein.

On Monday, January 8, the Trump administration announced that it would end protections for immigrants from El Salvador who had previously been covered under Temporary Protected Status in the U.S. since 2001. TPS is a legal designation for immigrants from certain countries which have experienced life-threatening situations, such as a natural disaster or war, and grants those migrants protection from deportation and the ability to work legally in the US. The termination of TPS for Salvadorans will take effect on September 9, 2018.

Pablo Alvarado is Executive Director of the National Day Laborer Organizing Network (NDLON), a coalition of worker-centered organizations across the country that defend day laborers from exploitation and extreme immigration enforcement, help people find jobs and recover wages, and train workers in health and safety. 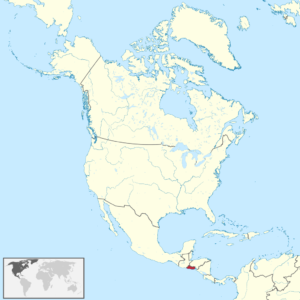 Map of North America with El Salvador in red (Wikipedia)

I spoke with Alvarado on Tuesday, January 9th, the day after the Trump administration announced its decision to rescind TPS status for Salvadorans. “A lot of our members are people who come from Central America and particularly Honduras and El Salvador,” said Alvarado. “A significant proportion are beneficiaries of Temporary Protected Status for Salvadorans, which protects about 200,000 people with documents from deportation.”

Dennis Bernstein: I know you have been in meetings all day, developing strategies, and dealing with the huge amount of fear that is sweeping through communities that you represent and advise on a daily basis. What is your first gut response to this latest move by Trump?

Pablo Alvarado:This action on the part of the Trump administration is not just an act of cruelty but also of hatred and of bigotry.  This president decided to terminate an incredible program that has facilitated the immigration of thousands and thousands of migrants.  Today, 30% of these people own homes, over 90% have jobs.  And yet, in an act of cruel racism, this administration has decided to get rid of this program.

Their motivation is very clear: to reduce the number of non-white immigrants.  They are scared of the changing demographics in our country.  This is their way of slowing down the emergence of a new majority.  They are no longer just going after undocumented people, they are taking away the papers of people with documents.

Dennis Bernstein: You are from El Salvador yourself.  Could you talk a little bit about the kinds of violence that people fled during this period of US-supported death squads?

Pablo Alvarado: It is important to note how many times the US has intervened in Central America.  The latest case is our recognition of a president in Honduras that 80% of the Honduran people don’t want.  Honduras will continue to be in flames for months to come.  Already death squads are emerging and activists have been disappeared and tortured. Children are being gassed while protesting.

All of this will lead to even greater poverty and feed the cycle of migration.  This is the same thing that the United States has done in El Salvador, in Nicaragua, and throughout the region.  The widespread gang violence in El Salvador is something that was imported from Los Angeles.  I can tell you that my two brothers, who are teachers and make $450 a month, are being extorted by gang members.

Temporary protected status was introduced following the great earthquake [of 2001] but the reality is that El Salvador has not yet recovered from that natural disaster.  The country is still in dire circumstances.  There are many villages that subsist on the remittances of family members who are here in the United States.  This action by the Trump administration is going to lead to an even larger humanitarian crisis.

Dennis Bernstein: Do you see this as a form of ethnic cleansing?

Pablo Alvarado: It is clearly an effort, as I said, to slow down the emergence of a new majority.  This has always been the strategy of the people around Trump.  They refer to it as “attrition through enforcement.”  This involves making the lives of immigrants so miserable that they will want to pack their bags and leave on their own.  Ending TPS is essentially a step in that direction.

It is interesting, right-wing pundits say that it is the Democrats who want to allow these immigrants to come because they want to turn them into Democratic voters.  This is so ridiculous.  These people are leaving their countries not to be able to vote here.  They are fleeing violence and extreme poverty and persecution.  Any country that respects human rights is going to want to provide safe haven to people fleeing such conditions.

Dennis Bernstein: What kinds of actions are you planning to take now?

Pablo Alvarado: We recently put together the National TPS Alliance, a coalition of about 50 committees of TPS recipients across the country who have come to Washington several times and are coming again in the first week of February.  Prior to this recent decision, they were already doing lobbying work, trying to persuade politicians from both sides of the aisle of the seriousness of their plight.

Out of those conversations, four legislative proposals have been introduced to provide a permanent solution for TPS holders.  The administration may want to see TPS fade away in 18 months but we are determined to make these proposals a reality.