From the Archive: Just before Trump took office last year, ex-British intelligence officer Annie Machon wrote about the battle he was facing with U.S. intelligence agencies. As Russia-gate morphs into Intel-gate, we re-publish her prescient article today.

The clash between plutocratic President-elect Trump and the CIA is shaping up to be the heavyweight prize fight of the century, and Trump at least is approaching it with all the entertaining bombast of Mohammed Ali at the top of his game. Rather than following the tradition of doing dirty political deals in dark corners, more commonly known as fixing the match, Trump has come out swinging in the full glare of the media. 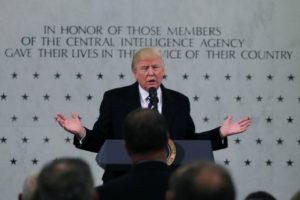 President Trump addresses the CIA in Langley, Virginia on January 21, 2017.

In that corner, we have a deal-making, billionaire “man of the people” who, to European sensibilities at least, reputedly espouses some of the madder domestic obsessions and yet has seemed to offer hope to many aggrieved Americans. But it is his professed position on building a rapprochement with Russia and cooperating with Moscow to sort out the Syrian mess that caught my attention and that of many other independent commentators internationally.

In the opposite corner, Trump’s opponents have pushed the CIA into the ring to deliver the knock-out blow, but this has yet to land. Despite jab after jab, Trump keeps evading the blows and comes rattling back against all odds. One has to admire the guy’s footwork.

So who are the opponents ranged behind the CIA, yelling encouragement through the ropes? The obvious culprits include the U.S. military-industrial complex, whose corporate bottom line relies on an era of unending war. As justification for extracting billions – even trillions – of dollars from American taxpayers, there was a need for frightening villains, such as Al Qaeda and even more so, the head choppers of ISIS. However, since the Russian intervention in Syria in 2015, those villains no longer packed as scary a punch, so a more enduring villain, like Emmanuel Goldstein, the principal enemy of the state in George Orwell’s 1984, was required. Russia was the obvious new choice, the old favorite from the Cold War playbook.

The Western intelligence agencies have a vested interest in eternal enemies to ensure both eternal funding and eternal power, hence the CIA’s entry into the fight. As former British MP and long-time peace activist George Galloway so eloquently said in a recent interview, an unholy alliance is now being formed between the “war party” in the U.S., the military-industrial-intelligence complex and those who would have previously publicly spurned such accomplices: American progressives and their traditional host, the Democratic Party.

Yet, if the Democratic National Committee had not done its best to rig the primaries in favor of Hillary Clinton, then perhaps we would not be in this position. Bernie Sanders would be the President-elect.

These establishment forces have also revealed to the wider world a fact long known but largely dismissed as conspiracy theory by the corporate mainstream media, that the two-party system in both the U.S. and the U.K. is a sham. In fact, we are governed by a globalized elite, working in its own interest while ignoring ours. The Democrats, openly disgruntled by Hillary Clinton’s election loss and being seen to jump into bed so quickly with the spooks and the warmongers, have laid this reality bare.

In fact, respected U.S. investigative journalist Robert Parry recently wrote that an intelligence contact told him before the election that the intelligence agencies did not like either of the presidential candidates. This may go some way to explaining the FBI’s intervention in the run-up to the election against Hillary Clinton, as well as the CIA’s attempts to de-legitimize Trump’s victory afterwards.

Whether that was indeed the case, the CIA has certainly held back no punches since Trump’s election. First the evidence-lite assertion that it was the Russians who hacked the DNC emails and leaked them to WikiLeaks: then the fake news about Russia hacking the voting computers; that then morphed into the Russians “hacked the election” itself; then they “hacked” into the U.S. electric grid via a Vermont utility.  All this without a shred of fact-based evidence provided, but Obama’s expulsion of 35 Russian diplomats last month solidified this dubious reality in Americans’ minds.

All this culminated in the “dirty dossier” allegations last week about Trump, which he has rightly knocked down – it was desperately poor stuff.

This last item, from a British perspective, is particularly concerning. It appears that a Washington dirt-digging company was hired by a Republican rival to Trump to unearth any potential Russian scandals during the primaries; once Trump had won the nomination this dirt-digging operation was taken over by a Democrat supporter of Hillary Clinton. The anti-Trump investigation was then sub-contracted to an alleged ex-British spy, an ex-MI6 man named Christopher Steele.

The Role of MI6

Much has already been written about Steele and the company, much of it contradictory as no doubt befits the life of a former spy. But it is a standard career trajectory for insiders to move on to corporate, mercenary spy companies, and this is what Steele appears to have done successfully in 2009. Of course, much is predicated on maintaining good working relations with your former employers.

That is the aspect that interests me most – how close a linkage did he indeed retain with his former employers after he left MI6 in 2009 to set up his own private spy company? The answer is important because companies such has his can also be used as cut-outs for “plausible deniability” by official state spies.

I’m not suggesting that happened in this case, but Steele reportedly remained on good terms with MI6 and was well thought of. For a man who had not been stationed in Russia for over 20 years, it would perhaps have been natural for him to turn to old chums for useful connections.

But this question is of extreme importance at a critical juncture for the U.K.; if indeed MI6 was complicit or even aware of this dirt digging, as it seems to have been, then that is a huge diplomatic problem for the government’s attempts to develop a strong working relationship with the US, post-Brexit. If MI6’s sticky fingers were on this case, then the organization has done the precise opposite of its official task – “to protect national security and the economic well-being of the UK.”

MI6 and its U.S. intelligence chums need to remember their designated and legislated roles within a democracy – to serve the government and protect national security by gathering intelligence, assessing it impartially and making recommendations on which the government of the day will choose to act or not as the case may be.

The spies are not there to fake intelligence to suit the agenda of a particular regime, as happened in the run-up to the illegal Iraq War, nor are they there to endemically spy on their own populations (and the rest of the world, as we know post-Snowden) in a pointless hunt for subversive activity, which often translates into legitimate political activism and acts of individual expression).

And most especially the intelligence agencies should not be trying to subvert democratically elected governments. And yet this is what the CIA and a former senior MI6 officer, along with their powerful political allies, appear to be now attempting against Trump.

If I were an American, I would be wary of many of Trump’s domestic policies. As a European concerned with greater peace rather than increasing war, I can only applaud his constructive approach towards Russia and his offer to cooperate with Moscow to stanch the bloodshed in the Middle East.

That, of course, may be the nub of his fight with the CIA and other vested interests who want Russia as the new bogeyman. But I would bet that Trump takes the CIA’s slurs personally. After all, given the ugliness of the accusations and the lack of proof, who would not?

So, this is a world championship heavy-weight fight over who gets to hold office and wield power, an area where the U.S. and U.K. intelligence agencies have considerable experience in rigging matches and knocking out opponents. Think, for instance, Iranian Prime Minister Mohammad Mossadeq in 1953; Chilean President Salvador Allende in 1973; Iraqi leader Saddam Hussein in 2003; and Libyan leader Muammar Gaddafi in 2011. Syrian President Bashar al-Assad is wobbly but still standing, thanks to some good corner support from Russia.

However, it would appear that Trump is a stranger to the spies’ self-defined Queensbury Rules in which targets are deemed paranoid if they try to alert the public to the planned “regime change” or they become easy targets by staying silent. By contrast, Trump appears shameless and pugnacious. Street-smart and self-promoting, he seems comfortable with bare-knuckle fighting.

This match has already gone into the middle rounds with Trump still bouncing around on his toes and still relishing the fight. It would be ironic if out of this nasty prize fight came greater world peace and safely for us all.

← A Note to Our Readers
U.S. Intelligence Crisis Poses a Threat to the World (Part 1) →