The Kurds find themselves caught in the middle of a power struggle between the U.S., Russia, Turkey, Iran and Syria — a familiar situation that follows decades of geopolitical strife in their region, explains Ted Snider.

The only thing that has ever been faithful to the Kurds is history: it has faithfully, without fail, betrayed them. The Kurds have been cast in the role of the pawn in powerful countries’ games of chess. They do much of the hard work only to be sacrificed when checkmate is in sight. 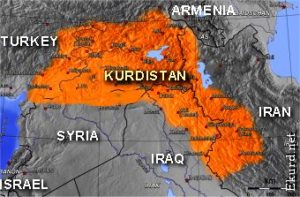 Most recently, the U.S. rediscovered the Kurds as useful pawns in the war on the Islamic State. But, despite being one of the most effective forces fighting the Islamic State, now that the end is in sight, the Kurds are, once again, in danger of being abandoned.

The United States, unlike Russia and Iran, was never invited into Syria. The U.S. insisted, though, that it was only there to save Syria from the Islamic State. Recently, however, Secretary of State Rex Tillerson tipped the American hand. America has no intention of leaving Syria once the Islamic State is checkmated, he said. The U.S. will stay after the war is over, and the uninvited stay has to do with more than just keeping the Islamic State down – it has to do with keeping Iran out.

Consistent with the current strategic pivot from Syria to Iran and Hezbollah, keeping American forces in Syria appears geared more toward kicking Iran and Iranian ally Bashar al-Assad out of Syria than it does with keeping the Islamic State out of Syria.

But to checkmate the Ayatollah, America needs to employ its pawns, and those pawns, once again, are the Kurds. The 30,000-soldier border force the U.S. would deploy to block Iran would be made up mostly of Kurds. But an armed Kurdish presence on the northern border with Turkey is a red line that Turkey has long warned it would not allow the Kurds to cross. So, the American decision has brought the wrath of Turkey down upon the Kurds.

As Turkey invades and bombs Afrin and the villages around it, experts on the region, such as Patrick Cockburn, warn that the Kurdish villages will be “reduced to mounds of smashed masonry.” As the number of dead and wounded rises, and as doctors in the region warn “of a rapidly worsening humanitarian situation,” senior Kurdish politician Aldar Khalil demanded that the U.S. “should meet their obligations toward this force that participated with them.”

“How can they stand by and watch?” he asked.

But this is not the first time the Kurds have asked that very question. In March 1975, the desperate Kurds begged the Central Intelligence Agency: “Our people’s fate in unprecedented danger. Complete destruction hanging over our head. No explanation for all this. We appeal you and U.S. government intervene according to your promises.”

The promise to which they were referring was a U.S. promise to support the Kurds if they would provide the troops for a covert action against Saddam Hussein – if they would be the pawns in the great powers’ game.

In the 1970s, Iran and Iraq were quarrelling over a number of border disputes. In the hope of keeping the Iraqis preoccupied and busy, the Shah offered money and arms to the Kurds to fight Saddam Hussein. But the Kurds didn’t trust the Shah and made their acceptance conditional upon an American guarantee that Iran would not cut the lifeline to the Kurdish uprising.

Iran expert Trita Parsi says the CIA and the State Department counseled against the covert action because of the inevitability of the Shah’s betrayal of the Kurds. But Henry Kissinger took the opposing position, and, following a 1972 visit to Tehran by Kissinger and President Richard Nixon, the U.S. promised the Shah American support for the Kurds: the Americans promised to support the Kurds.

Nixon signed off on the covert operation on August 1, 1972; Kissinger made the arrangements for the covert war, and the CIA took charge of it. The support took the form of $5 million and weapons, but by the following year, Kissinger had backed, and Nixon had approved, greater U.S. aid that would eventually reach over $20 million dollars and more than 1,250 tons of weapons and munitions.

But by 1975, the U.S. backed Kurdish uprising was in trouble. The U.S. eventually came to the conclusion that the Kurds could only be saved by an Iranian military intervention. The Shah was providing much more money than the Americans, but he was not willing to commit his armed forces. He refused and, instead, began negotiating a border settlement with Saddam Hussein. The Shah received territory in exchange for ending support for the Kurds. According to investigative journalist Robert Fisk, it was Kissinger—one of the guarantors of the promise to support the Kurds–who hammered out this agreement between the Shah and Saddam and, so, abandoned the Kurds.

Financial aid and arms stop flowing to the Kurds, and Saddam slaughtered perhaps as many as 182,000 Kurds. Many more fled to Iran as refugees. That’s when the first 1975 Kurdish appeal was made to America. Kurdish leader, Mullah Mustapha Brazani would personally appeal to Kissinger, one of the authors of American assurances, that “We feel … the United States has a moral and political responsibility toward our people who have committed themselves to your country’s policy.”

Kissinger never answered, though, according to CIA expert John Prados, his station chief in Tehran had argued that he should and gave him options.  Kissinger abandoned the Kurds with the famous reminder that “Covert action should not be confused with missionary work.”

Several years later, in the first Gulf War, the Kurds would be asked by the U.S. to rise up against Saddam Hussein a second time. This time, the request came from the CIA. And, again, the Kurds were abandoned by the Americans. And, again, thousands of them died in Saddam’s retaliation, and tens of thousands were forced to flee.

This betrayal of the Kurds followed a long history. The Kurds were first given their own land when a small piece of what had been Turkey was given to them in 1920. They quickly lost it back to Ataturk and the Turks, and the international community abandoned them. The Kurds found themselves in the vulnerable position they are now in, scattered across Turkey, Syria, Iran and Iraq.

From these events to the current situation in Syria runs an unbroken chain of America using and abandoning their Kurdish pawns. Leaked documents reveal American willingness to purchase Turkish cooperation at the expense of Kurdish interests and lives.

A leaked 2006 embassy cable declared that Secretary of State Condoleezza Rice promised the government of Recep Tayyip Erdogan “that the US would reinvigorate trilateral (US-Turkey-Iraq) discussions on the [Kurdish] issue.” The cable lists several “significant efforts the USG [US government] is undertaking to ameliorate the PKK [Kurdistan Workers Party] threat.” The cable boasts that “Sharing of sensitive intelligence on PKK activities within Turkey has led to successful COIN [counter-insurgency] operations.” It also includes as significant efforts “surveillance flights over PKK camps in northern Iraq,” and “An intelligence fusion cell, which meets weekly in Ankara to pass information to the Turkish military on PKK activity.” In other words, the U.S. gave Turkey intelligence to use against the Kurds.

The following year, in 2007, President Bush “promised to provide Turkey with ‘actionable intelligence’ to use against the PKK” [Wikileaks CRS-RL34642]. The same cable says that the Turks have used that intelligence: that “Since that time, Turkish forces have launched targeted air and ground strikes against PKK camps and other facilities located in the mountains of northern Iraq.” It concludes with the line, “They have expressed satisfaction with their results.”

According to John Prados, as early as 1948, the CIA had said that “The mountain tribes known as the Kurds are now and will continue to be a factor of some importance in any strategic estimate of Near East affairs.”

Seventy years later, the Kurds are still being disappointed by the meaning of American assurances regarding actions taken based on those estimates. It is not known how America will negotiate being caught in the middle of its Kurdish ally in the war in Syria and its NATO ally in Turkey, but history is not exactly whispering assurances in the Kurds’ ears.

37 comments for “Pawns in the Game: A Brief History of America and the Kurds”