Last year’s disputed elections in Honduras continue to present a struggle for grassroots activists in the country, who face harsh police and military crackdowns in response to protests, reports Dennis J. Bernstein in the following interview.

The latest tragedy of misguided U.S. foreign policy in Central America is the tacit support for another stolen presidential election in Honduras. The new right-wing renegade government there is inflicting terrible violence upon people who refuse to accept the election results from Last November’s election between extreme right-wing parliamentary dictator, Juan Orlando Hernandez, the current president, and progressive reformer, Salvador Nasralla.

To get a clearer picture as to what is happening on the ground in Honduras–which includes dozens of murders of street activists–I spoke to Sandra Cuffe. Based in Tegucigalpa, Honduras, Cuffe has resided for many years in Central America and writes for several online publications.

Cuffe also expressed deep concern for the safety of Edwin Espinal, a noted activist and ally to many movements in Honduras, including COPINH. COPINH is the group founded by the late Berta Caceres, who it is believed was assassinated by right-wing forces affiliated with the Honduran government. Espinal has now been arrested and is being held under difficult circumstances at a Honduran military base.

“The current government has arrested, beaten Espinal many times,” said one friend and co-worker of Espinal. “His body has been beaten and broken repeatedly. Now he is a political prisoner, held in leg chains, for having exercised his right to free speech and free assembly”.

I spoke to Cuffe on January 24 in Tegucigalpa, Honduras.

Dennis Bernstein: Could you remind people what happened in terms of recent elections in Honduras, and give us a sense of the atmospheric pressure right now?

Sandra Cuffe: Last November 26 there were general elections in Honduras.  It was a fiercely contested election between Juan Orlando Hernandez, the current president, and Salvador Nasralla, who was the candidate for the oppositional alliance against the dictatorship.

According to the Honduran constitution, re-election for the office of president is not allowed but the right wing has been concentrating power to the point where the executive branch controls basically all branches of government and a supreme court ruling allowed for the president’s re-election.

On the other side, the Libre Party grew out of resistance to the 2009 coup d’etat that was supported by the United States.  For these elections, it formed an alliance with a smaller party, as well as with Salvador Nasralla.

After more than half the votes had been counted, preliminary results had Nasralla in the lead by five points, which was considered irreversible.  The computer system then mysteriously crashed and when it came back online that lead began to rapidly disappear.

That was the earliest indication that fraud was involved.  The official results took another few weeks to come out. The Organization of American States found serious irregularities in the voting and numerous indications of fraud.

Meanwhile, there were massive protests and all kinds of actions going on across the country. At least 35 people have been killed, with the actual number being probably much higher. Most were killed when security forces opened fire on protests around the country. Hundreds have been wounded and well over a thousand have been detained. Many have been released but some are still being held as political prisoners. The inauguration is set for January 27 so we are now in the middle of a week of action leading up to that.

DB: Please say a little more about what is at stake here and why people are willing to put their lives on the line.

SC: What is at stake is democracy.  Since the 2009 coup, people have organized, formed political parties and alliances. A lot of people who hadn’t been politically active before are now starting to take action in an attempt to change what is going on.

The ruling National Party has been in power since 2010. They have concentrated power to an extreme degree. There has been a huge rise in militarization, including the creation of a military police which has been responsible for the majority of the deaths of protesters. 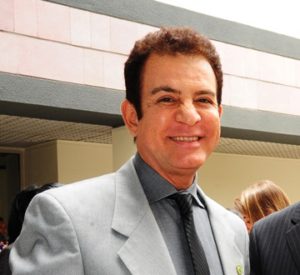 Even aside from this current crisis since the election, Honduras has long been one of the most violent countries in the world, one of the most dangerous for environmental defenders as well as for journalists. Healthcare and education are in shambles. Corruption is rampant. So really the future of the country is at stake.

But despite the repression, people are not backing down. There have been massive marches, especially last December in the capital, with tens of thousands of people in the streets. The opposition alliance has its strongest base in the northwest of the country, where resistance has always been strongest. Tire blockades have been used in a lot of places. There was at first some limited dialogue with police, but recently it has mainly been military forces showing up, opening fire or using tear gas.

DB: What has the U.S. government said about the killing of protesters?  Do they continue to support the coup?

SC: For decades, Honduras has been a key ally of the U.S. in Central America. There is a huge military base there. It is home to the U.S. Southern Command Joint Task Force Bravo. In the 1980s it was the training ground and launching pad for counterinsurgency operations throughout Central America. The United States is in the background of everything that goes on politically in Honduras.

The U.S. and the OAS disagreed on whether to recognize the election results. Two days after the election and just before soldiers started opening fire on protesters, the U.S. State Department certified the election, which freed up military aid to the Honduran government.

DB: The important activist Edwin Espinal is now in custody.  What is going on there now with his case?

SC: Edwin is a longtime activist in Honduras. He was extremely active in the movement in the streets after the coup. His wife was actually killed in the context of the protests. There have been around a thousand detentions. Most of those detained were released soon afterwards, but there are at least a couple dozen people still in jail. The charges are mainly related to property destruction.

In Edwin’s case, in response to tear gas attacks, protesters broke the windows of a Marriot Hotel next to the Presidential Palace. Several police stations have been burned down after police opened fire on protesters. Edwin was arrested last Friday and he faces three charges related to property destruction. He is under investigation for terrorism and criminal association. Edwin’s case has been placed in a special court system, with his hearings taking place on a military base. There is virtually no public access. This Monday he had his initial hearing.

DB: Has anyone been able to talk to him directly? And how do you think he will be treated while in custody?

SC: People were able to visit him after his arrest when he was being held in a police cell. They were able to see him very briefly going to and from hearings. However, he has lawyers from a prominent human rights organization so there has been some communication with the outside. Visits are very difficult to arrange. Reading materials are forbidden. In terms of safety, because there have been so many incidents of intimidation and threats by security forces against Edwin dating back to right after the coup, the government has implemented “protective measures” in his case under orders of the Inter-American Commission on Human Rights.

DB: Has Edwin’s case received any support from members of the U.S. Congress?

SC: I don’t know the answer to that yet. There is a very active Honduran solidarity network in the US and Canada who have been very involved since the coup.

DB: In terms of U.S. policy toward Honduras, this is actually what we like to see, isn’t it? It is like one big free-trade zone with a few military bases thrown in. We can also expect a flood of more Hondurans and other Central Americans to the U.S.

SC: I know that when you talk to most young people, they no longer see a future for themselves here.They organized and went to the polls and the signs of clear victory were simply wiped out two days later. People are outraged and many of them will leave the country.

← Rethinking Cultural Attitudes Towards Sex and Violence
The Dangerous Erosion of U.S. Leadership →

31 comments for “The Struggle Against Honduras’ Stolen Election”