The recent stories of sexual harassment being shared through the #MeToo campaign and allegations against Washington, Hollywood and Olympics bigwigs is an opportunity to correct harmful cultural perceptions of sex and violence, writes Lawrence Davidson.

Sigmund Freud published his book Civilization and Its Discontents in 1930. Having witnessed World War I, Freud knew that discontent was part and parcel of the human condition. The question he sought to answer was why that was so. 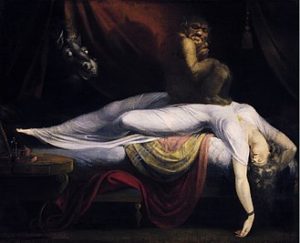 “The Nightmare” by Henry Fuseli, 1781. Oil on Canvas. The painting has been used to symbolize sexuality and the unconscious mind.

The short answer he came up with goes like this:

Human beings have instinctual drives such as sex and violent aggression – expressions of the Id. Left unchecked they would destroy any hope of settled life and high culture. According to Freud, civilization is the vehicle humans have created to control these inherent drives. Civilization and its various component cultures create rules and regulations– as well as feelings of remorse and guilt (expressions of a culturally attuned Superego) – that result in either suppression or sublimation of these primitive drives.

However, the results are not perfect, especially when it comes to controlling violent aggression. Indeed, as a consequence of the mass slaughter that was World War I, Freud came to the conclusion that human beings have a deep and permanent “death wish.” Even at less drastic levels of aggression, most societies experience frequent episodes of domestic violence, and the high degree of across-the-board neuroses.

In the Freudian scheme, control of the instinctual sexual drive (itself another form of aggression) is supposed to be a bit easier. Eros can be sublimated into the creation of beauty (art) as well as various intellectual achievements. Yet here too, what has been evolved are imperfect controls, especially when encapsulated in cultures that promote male domination.

If one does not like Freud’s ideas, the whole issue of the activation and control of aggression and sex can be looked at in terms of brain function. In other words, our brains have evolved to promote survival and reproduction – originally in the pre-state, pre-tribal primate bands of distant prehistory. These tasks involve multiple parts of the cortex and amygdala, thalamus and hypothalamus, and so forth. There is one area of the brain that is particularly important in keeping instinct from running amok – the prefrontal cortex. Slow to mature (it is not fully on-line until one’s mid-twenties) it is this part of the brain that exercises “executive function.” It encourages you “to do the right, though perhaps harder, thing.”

The Role of Culture

Despite the fact that the physical manner in which most individuals experience these primitive and instinctual drives is similar, culture makes a difference in how aggression and sexual urges are expressed. For instance, most of the world’s cultures are patriarchal. That is, they overtly assign authority, both in the public realm and private, to men. Men are supposed to exercise that authority within the confines of their culture’s rules and regulations. Sometimes these are relatively strict, damping down the “macho” impulses that rationalize aggressive physical and sexual behavior. More often they condone or even encourage “macho.”

Keep in mind that the assignment of authority is the assignment of power, and power is the ability to act with aggression. Thus, in a patriarchy, it is with men that the issue of control is most immediate. If there are not sufficient mechanisms within such cultures that identify specific aggressive behavior as unacceptable, or promote public shaming, or just generate a heck of a lot of remorse and guilt, you are going to have high degree male recklessness – everything from schoolyard bullying to criminal violence, as well as the sexual “acting out” we now see as not just rape, but also sexual harassment.

Sexual Harassment as a Worldwide Problem

The common definition of sexual harassment is as follows: “uninvited and unwelcome verbal or physical behavior of a sexual nature especially by a person in authority toward a subordinate (such as an employee or student).” The legal definition in the U.S. pertains chiefly to the workplace, where the unwelcome approach has the connotation of blackmail – something like, “Do this with me or you won’t get promoted.” There are also a myriad number of state and local laws that cover a wide range of situations. Many of these have been on the books only since the 1960s and, unfortunately, are not uniformly enforced.

It is hard to get exact numbers unless you start adding up the results of hundreds of surveys and polls that address the whole range of harassment-related situations. And these only give you the approximate numbers of reported incidents. Time magazine had a series of particularly scandalous cases at Cornell and Harvard Universities in the late 1970s and early 1980s, and came up with an estimate that “as many as 18 million American females were harassed sexually while at work in 1979 and 1980.”

If this estimate is anywhere near accurate, the problem of sexual harassment has to be huge. We know it can’t be just a U.S. problem. It has to be a worldwide phenomenon.

Sad to say, such a horrid diagnosis should not be surprising if sexual aggression stems from evolution-based drives and societal accommodation to this primal instinct through the encouragement of machismo male characteristics.

If in nothing else, Freud was correct in seeing that culture is, albeit imperfectly, our only plausible line of defense. It takes on this role by serving as a guide for the prefrontal cortex – a guide to the “right, though harder, thing to do.” The problem is that, to date, patriarchal cultures have not defined the protection of the subordinate gender as a necessarily “right” thing. They are more interested in directing male aggression into pathways compatible with patriarchal power structures. In other words, the guide is corrupt.

Although this is the way it is, it is not the way it has to be. It is possible to reshape cultural concepts. For better or worse, religions and empowered ideologies have been doing this for a long time. However, their targets have not been male aggression, sexual or otherwise.

But now we may have a window of time when this important subject can be rethought – rethought to the end of improving the cultural assistance given to the mature prefrontal cortex. Along these lines, here are some potential steps to consider. All should be pursued in a non-ideological way. Let’s keep religion and politics out of these efforts, and let science and evolutionary awareness be our tutors.

— Educate both men and women about the nature of the primitive instincts they are subject to. As it is, most individuals grow up without having a clue about what they are experiencing. Explain the need to manage these instinctual urges in reasonable ways. Explain that this means maintaining responsible cultural values.

— Sexual egalitarianism should be implemented by law and then taught as “what is right” from kindergarten through college. The gender biases inherent in patriarchy should be seen as part of an unfortunate past history – like racism.

— Devise instructional lessons to prepare young folks for serious relationships and marriage based on egalitarian principles. Such lessons should be at least as detailed as those needed to get a driver’s license.

— Use the media to create a popular cultural environment that strongly condemns sexual harassment and other forms of aggression. The media should encourage serious remorse among bullies and harassers.

Do these suggestions sound like some civil authority should be allowed to shape how we think? Sorry, but in every culture, past and present, something like that has always been the case. You can also safely assume that those primitive instincts have always been playing with your mind.

And what have all the age-old, status quo cultural rules brought us so far? Civilization? Well, perhaps. But it is a civilization that still suffers periodic outbreaks of aggressive violence and rationalizes a tradition of unwanted sexual behavior abetted by patriarchal values. Not surprisingly, current laws, as they reflect the current state of culture, haven’t been very effective holding either form of aggression back.

Now that the sexual harassment genie seems to have escaped the bottle, we can see the problem more clearly. It’s time to pursue serious culture renovation – to take on those primitive instincts and thoughtfully develop better, non-doctrinaire cultural ways to manage them. One thing is for sure, they are not going to go away on their own.

38 comments for “Rethinking Cultural Attitudes Towards Sex and Violence”