Though expanding the U.S.-led war in Afghanistan last year, President Trump has shown little interest in the details — until New Year’s Day when he threatened Pakistan in a surprising tweet storm, reports Dennis J Bernstein.

In recent days, Pakistan has found itself in the crosshairs of President Donald Trump’s Tweet-threats to the surprise of many since Pakistan has not been a country that has drawn much of his attention in his first year in office.

Trump’s first tweet of 2018 was about the U.S. relationship with Pakistan. “The United States has foolishly given Pakistan more than 33 billion dollars in aid over the last 15 years, and they have given us nothing but lies & deceit,” Trump tweeted on Jan. 1. “They give safe haven to the terrorists we hunt in Afghanistan, with little help. No more!”

Then, on Jan 4, the State Department announced that the U.S. was freezing a good portion of the military aid the U.S. offers to Pakistan. The cut/freeze could be as much as $1.3 billion.

Pakistan’s Foreign Minister Khawaja Muhammad Asif was furious. He said, after the suspension was announced, that the U.S. had turned Islamabad into a “whipping boy” for 17 years of failure in the U.S.-led war against Afghanistan.  Khawaja told the Wall Street Journal that “This is not how allies behave.”

I spoke about the new Trump policy and its many implications with Junaid Ahmad. an assistant professor at the University of Lahore in Pakistan and Secretary-General of the International Movement for a Just World. I spoke to Professor Ahmad on Jan. 3.

Dennis Bernstein: Could you begin by describing what the International Movement for a Just World is?

Junaid Ahmad: We are an NGO [non-governmental organization] based in Malaysia which has networked over several decades now with a lot of the global justice campaigns, the anti-war movement, and the anti-corporate globalization movement.  Particularly in East Asia we have been one of the organizations at the forefront of these groups and are very well connected with other groups in North America, Latin America, Europe and Africa.

Dennis Bernstein: Let’s talk a little bit about the Trump administration’s current relations with Pakistan. Trump says he is very angry about Pakistan’s support for the Taliban.

Junaid Ahmad: The mainstream media in America does such a great job of manufacturing historical amnesia when it comes to this part of the world.  We have had to deal with all the ghosts and the beasts and the monsters created by the US empire and its clients like Saudi Arabia.

This is something the American empire doesn’t want people to understand in a straightforward way.  Foreign occupations, particularly when they last this long, will inevitably generate opposition.  In Afghanistan, none of the great empires lasted very long.

Washington planners have always tended to blame any problems faced by the occupation on its favorite scapegoat, which is Pakistan.  This is not to say that the Taliban does not have any relationship with the Pakistani establishment.  But we should point out that it is nothing like the relationship that existed in the 1990’s, where the Pakistani support for the Taliban was indispensable for its taking power in Kabul.

Today, it is a very different situation and the term Taliban is somewhat misleading because it is not just a particular group or ideological force but, in fact, an umbrella group for a variety of resistance forces, principally based within the Pashtun ethnic population, which constitutes about 60% of the country and is opposed to NATO occupation and its client regime in Kabul.

But the policy analysts in Washington and the administration and the Pentagon and the mainstream media do not want to confront this because it is far easier to simply blame Islamabad for all of the problems in Afghanistan. 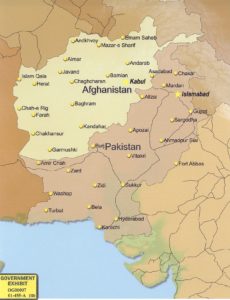 Map of Pakistan and Afghanistan (Wikipedia)

The second part of this story is to ask why the United States continues with its failed misadventure in Afghanistan.  I don’t think this has anything to do with any resurgence of terrorism in that country or any threat it poses to the West itself.  US and British intelligence reports have made it clear that Islamabad has actually been fairly cooperative in sharing intelligence regarding potential risks to the West from terrorist elements and has handed over suspected terrorists.

Dennis Bernstein: And this has taken quite a toll.

Junaid Ahmad: Absolutely.  This “war on terror” which has been imposed on the region by the United States has taken a toll of at least 70,000 lives in Pakistan itself.  In addition to that, the credibility of the Pakistani security forces in some of these areas has been completely lost.  We have seen a massive humanitarian crisis, with millions of internally displaced people.  So there has been a huge social cost within the country.  Across all sections of the population there is seen to be a need to rethink this kind of aggressive, militaristic policy.

This is not about support for the Taliban or some other group that is supporting the resistance in Afghanistan.  While in the 1990’s it may have been active support, at this point, it may be true that some of these fighters receive shelter in Pakistan but it is absolutely untrue that the resistance in Afghanistan is entirely dependent on Pakistani support. And once you start to ask yourself why the United States would persist in this failed adventure in Afghanistan, I think you will see that it has more to do with the geopolitics of the region.

Dennis Bernstein: Yes, the United States is in fierce competition there with a country known as China.  To many, the Chinese appear to be taking over where the United States failed in supporting the people of the region.

Junaid Ahmad:  It is like what happened in Syria at the end of the day.  We saw Turkey and Saudi Arabia, these great facilitators of US operations, sit down with the Russians and try to sort out that mess without any input from Washington.

The US has shown again and again that it does not know how to play a role as one among equals.  Whereas these regional countries are coming to recognize that they themselves must come to the table and forge some sort of resolution to their problems.  That is precisely what the Chinese have begun to do over the past few months by bringing these two rival countries, Afghanistan and Pakistan, to the table.  The Chinese plan is one of greater Eurasian integration.

The US empire has been weakened by many misadventures and larger structural and systemic issues.  It is incredibly fearful of what is going on and therefore sees it as essential to maintain a strong presence in Afghanistan in order to keep a check on regional developments.  Pakistan has seen that its relations with the United States are incredibly transactional and that at any time the US will abandon it, for example, in instinctively siding with New Delhi [India].

It should also be emphasized that China is, at the moment, very dependent on Pakistan.  It is not just a one-way street.  The Chinese are heavily invested in a project known as CPEC, the China-Pakistan Economic Corridor, which would allow the Chinese to access one of the great ports in Pakistan, Gwadar.  In the case of future conflict with Washington, that could be one of the lifelines for Chinese trade.

At this point, China’s closest ally in the world may in fact be Pakistan.  Again, this is very troublesome to planners in Washington.  Trump’s tweet should not be viewed out of the context of the broader unfolding geopolitics of the region. 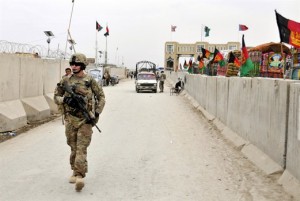 Dennis Bernstein:  We have heard that America’s continued presence in Afghanistan has nothing to do with peace there and everything to do with keeping control of certain resources in the region.

Junaid Ahmad: This is always part of the plan.  But sometimes things don’t go according to plan.  Yes, Afghanistan has been found to be rich in many valuable resources and relatively unexplored.  But I don’t feel at this point that that is the primary motivation in the case of Afghanistan.  If you remember, right after 9/11 and the US invasion of Afghanistan, Washington’s plan was to establish a presence in many of these Central Asian countries.  All of these countries have basically kicked the US out: Uzbekistan, Kazakhstan, and so on.  So Afghanistan continues to be geopolitically important to the United States.

Dennis Bernstein: The United States has certainly been taken out of the picture in Syria.

Junaid Ahmad: Absolutely.  America’s geopolitical weakness and its growing irrelevance are making it anxious and even paranoid.  That was exposed in Syria at the end with Washington being completely sidelined.  It doesn’t want the same thing to happen in Afghanistan.

If we were truly interested in peace and stability, it is clear that nothing is going to happen outside the context of a regional solution, bringing all of the actors together on an equal footing.  But it appears to be difficult for the United States to accept being one among equals.  The US seems to think that it is the only nation allowed to have strategic interests anywhere.

Dennis Bernstein: Should we also be thinking about this in context of the ever-present threat of nuclear weapons? Is there a danger in the United States recklessly trying to hold on to the region?

Junaid Ahmad: Of course.  It is interesting that, with all these nuclear powers in the region, the people there seem to see a threat only when rhetoric from Washington enters the picture.  That is when the fear starts, particularly with the present administration.  This is the irony:  You have these countries with nuclear weapons neighboring each other but the real anxiety in the region only breaks out when you get these tweets out of Washington.

Dennis Bernstein: A couple more US soldiers were just killed fighting at the border.  What was that about?

Junaid Ahmad: Particularly at the border with Pakistan, there is a large Pashtun population which is at the forefront of the resistance to the US/NATO occupation and which is referred to somewhat misleadingly as the Taliban.  Again, the claim that this is all happening because of Pakistani support is absolutely ridiculous.  If the Pakistanis were really supporting the resistance in Afghanistan, there would be a far different level of sophistication.  This is a genuine local resistance to the longstanding occupation.  It is very convenient to blame all the difficulties that this occupation has confronted on Islamabad.