President Trump boasts about all the regulations that he has eliminated but he never mentions the important good that many of these rules were  doing, as Dennis J Bernstein explains.

The battle to protect farmworkers and their families from dangerous pesticides has been going on for decades. But it has always been an uphill struggle because of the power and the money behind the mammoth petrochemical industry. In 2017, farmworkers, their families continued to be exposed to toxic sprays that drift into school zones and other populated areas. 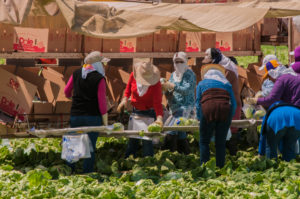 While there have been some improvements and restrictions at the California state level, experts and activists in the field say not nearly enough is being done. And compounding the problem, EPA Director Scott Pruitt took swift action against new regulations that were about to be put into place under President Obama

Dr. Ann Lopez, Director of the Center for Farmworker Families, based in Felton, California,has taught courses in biology, environmental science, ecology and botany in the biology department at San José City College for many years. She is an independent researcher whose research addresses the human side of the binational migration circuit from the subsistence and small producer farms of west central Mexico to employment in California’s corporate agribusiness.

Dr. Lopez has worked with over 33 farmworker families in the Salinas and Pajaro valleys. She has also studied 22 of their family farms in the west central Mexico countryside, and has received recognition and awards for her work.

Dr. Lopez,author of The Farmworkers Journey, was awarded the Human Agenda Ecological Sustainability Award in 2014 and the Community Action Board of Santa Cruz County, Inc. awarded her with the Community Game Changer Award in 2015.

Dennis Bernstein: We know that the struggle against pesticide use continues.  For so many years the farmworkers have been on the front line.  What can we say at this point about these dangerous pesticides that are poisoning so many farmworkers and their families?

Ann Lopez: There has been some progress, especially pertaining to chlorpyrifos, a developmental neurotoxin.  But we still have a long way to go.

I am very concerned about Roundup (glyphosate), which has been determined to be a Proposition 65 carcinogen. Monsanto does not have to label it as a carcinogen until well into 2018, which means that anyone who buys it thinking it is safe literally risks his or her life.  Just mere exposure puts you at high risk, particularly for non-Hodgkin lymphoma and a variety of other horrible diseases, including blood cancers.

I personally know of three people who have died as a result of exposure, they believed, to Roundup.  Yet this is sold in any hardware store as if it were nothing harmful.  It speaks to the neoliberal economy, where profits are much more important than people or the environment.

Dennis Bernstein: There have been struggles around other chemicals and concern about spraying near schools.

Ann Lopez: Fortunately, the Pajaro Valley school district has gotten rid of Roundup spraying.  This is one of my lead concerns because the entire public is put at risk with this and most people are unaware that this chemical can kill them!

Chlorpyrifos is a developmental neurotoxin derived from a nerve gas used in World War II which is primarily active on the brain and spinal cords of young children.  This chemical was banned for residential use in 2000 but is still used in agriculture.  So that is the front line for struggle today.

I have a PhD in environmental science and I have never read of a worse case of environmental racism than what I have studied in the Salinas Valley.  First of all, organophosphates are very detrimental to developing fetuses.  UC Berkeley scientists did a seventeen-year study of mothers and children in the Salinas Valley and found a direct correlation between a pregnant woman’s exposure to organophosphates and resulting brain damage to the child.  For every 522 pounds of exposure within a kilometer of where the mother resides, the child, by the time it reaches age seven, will have lost 2.2 points of IQ.

If you go online, you can see where the spraying occurs.  There are whole residential areas filled with people where this concentration occurs continuously.   Once these children grow up, they are intellectually deficient.  They go to schools surrounding these fields where they use this developmental neurotoxin chlorpyrifos as an insecticide.  Chlorpyrifos is drift-prone so once it is sprayed it moves through the air and into the classrooms, and it interferes with normal development of the brain and spinal cord.

So these children are impacted on two fronts, prenatally and then during their primary school years.  The vast majority of these children, something like 90%, are Latino.  I find it hard to believe that this would ever go on in a white neighborhood.  It would simply not be tolerated.

Prior to the Trump administration, the EPA banned chlorpyrifos nationwide and then Scott Pruitt, the new director, had a conversation with DOW executives and reversed the ban.  So right now we are trying to get it banned at least in the state of California.

A couple months ago, we went to the EPA office and met with one of their committees, the Office of Environmental Health Hazard Assessment.  DOW executives gave their position and then those of us who came from all over the state to address this issue gave our statement, and they voted 8-2 in our favor.  This means that chlorpyrifos is now listed as a Prop. 65 developmental neurotoxin, so we at least have that labeling on the containers.

But this past year has been a travesty for farmworkers.  Thirty-four workers in Bakersfield were hospitalized because of exposure to chlorpyrifos and then another 17 in central California.

Dennis Bernstein: This can involve a whole series of treatments and then you have to worry about the long-term damage.

Ann Lopez: Absolutely, there is the issue of chronic exposure.

Dennis Bernstein: Could you describe the suffering that’s involved?  What are the symptoms like?

Ann Lopez: They become very weak, very nauseous, some even collapse out in the fields.   The ones I worry about most are the children, who face permanent brain and spinal cord damage.   I have studied farmworker issues for many years now and every parent I have spoken with wanted their children educated and to have a better life out of farm work.  What are the chances for children to succeed academically and move on when their brains don’t develop normally?  We have a program called Safe Ag Safe Schools and we are partnered with Californians for Pesticide Reform.

Dennis Bernstein: These pesticides were created by companies that began working for the US defense industries making toxins to kill people.  What we are seeing here is an attempt to mainstream the industry into everyday life.

Ann Lopez: Whenever I meet with Mark Weller, Co-Director at Californians for Pesticide Reform, I ask him, “Has World War II ended yet?”  We are still using these horrific chemicals and continue to spray million of pounds of this poison all over the planet, all in the name of profit.

We had a press conference in Salinas on March 31, 2017 and I remember asking at the end of my talk, “Are your profits really worth the compromised brains of our children?”  You can ask the same thing about the biosphere, and so on.  At what point do we stop destroying the very planet that supports our existence?

These chemicals play a crucial role in all this.  I don’t think there is any excuse for using them.  Studies have long shown that if we converted to an all-organic, regenerative agriculture tomorrow, we could feed every human being on the planet and mitigate climate change by 30-40 percent.

So the question becomes, why aren’t we doing that?  The only reason is to keep these outdated industries in operation which are basically destroying the planet and all of its life-forms.  Personally, I find it unethical and reprehensible, and it can only happen when the public is kept uninformed.

15 comments for “Pesticide Use Threatens Health in California”