In a homage to George Orwell’s Newspeak, the Trump administration has compiled a list of words that are banned from use in budget requests, reports Lawrence Davidson.

There is a scene in George Orwell’s famous dystopian novel 1984, where the protagonist, Winston Smith, is having a conversation with a philologist by the name of Syme. Syme is involved in a government effort to restructure the language spoken by the novel’s upper classes, those who have power or work for the ruling party. The language is called “Newspeak.” Syme’s job is to get rid of dangerous words. Here is how he describes his task: “We’re destroying words – scores of them, hundreds of them, every day. … The whole aim of Newspeak is to narrow the range of thought. In the end we shall make thoughtcrime [having unorthodox thoughts] literally impossible, because there will be no words in which to express it.” 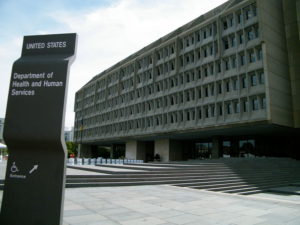 Headquarters of the Department of Health and Human Services in Washington, DC. (Wikipedia Sarah Stierch (CC BY 4.0))

Now let’s shift to another scene, not a literary or fictional scene, but a probable real life one.

Sometime in the month of December 2017, somewhere in the bowels of the Department of Health and Human Services (HHS) in Washington, D.C., a high-level appointee of the Trump administration moved to take ideological control of the agency’s budget-writing process. This official presented a directive to the agency’s departments, such as the Centers for Disease Control (CDC), listing seven words that were not to be used in budget preparation. If they were, they would be flagged and the document sent back for “correction.”  The seven “forbidden” words are: “vulnerable,” “entitlement,” “diversity,” “transgender,” “fetus,” “evidence-based” and “science-based.”

The higher-ups at the HHS have insisted that there is no “ban” in place. Departments like the CDC can still do research in areas to which these unwelcome key words relate. But this disclaimer is misleading. To do the research you need money, and the money comes from the budget. The “discouragement” of key words is meant to marginalize their related research agendas. If fully effective, this attempt at censorship – for that is what it is – could contribute to undermining several generations of cultural progress, and challenge the “science-based” methodology that serves as a foundation for the modern world.

We already know that President Trump has no time for facts that differ from his personal worldview. That is why the U.S. is not part of the “science-based” treaty to slow down global warming. We also already know that he does not think minorities (both racial/ethnic and sexual) deserve protection under the law. These and other prejudices, worn so publicly by the president of the United States, have let loose a revolt of religious and social reactionaries, perhaps numerically represented by the 33% of Americans who approve of Trump’s performance. These folks would take the country back to a time of discrimination, segregation, and scientific know-nothingness. And for Trump these folks are the only ones who really count. He has recently declared that unfavorable polls are “fake news.” This is Trump “making America great again.”

It appears that one way Trump and his allies think this can be done is by censoring the language used by the people in power and those who work for them. As the computer engineer and writer Jem Berkes points out in reference to 1984, “the ultimate aim of Newspeak is to enclose people in an orthodox pseudo-reality and isolate them from the real world.” Sounds a lot like what is happening at HHS.

Can this work? It probably already has among the roughly one-third of adult Americans who are sympathetic to Mr. Trump’s ultimate aims. These include many Christian fundamentalists and various racist conservative sects, the Alt-Right and Fox TV talking heads. Among those who are of the opposite point of view, both cultural and political progressives, there is no chance that this proposed “orthodoxy” will go unchallenged. Many of this latter group are old enough to remember what the president’s “great America” once looked like – for instance, what life was like before the civil rights acts. And many of those who can see through Trump’s double-talk, of whatever age, have an instinctive preference for equality, fairness and clear thinking.

However, between these two opposing groups lies the insulated masses – the millions who pay little attention to politics and know little of the importance of science. These folks, focused on their day-to-day concerns, are essentially isolated in their localness. They have no sense of what is presently at stake, and therefore find it difficult to think critically about the Trump agenda. For this group, skewing language may well result in skewing their worldview. It is probably from the thinking of this segment of the population that Trump and his agents want to ultimately eliminate the values represented by the “seven forbidden words” and all that they mean for social policy.

Thus, the end game is to have no more thinking of society and its problems in terms of a citizen diversity, minority vulnerability, or entitlement based on proven need. For instance, citizens are not to think that sexual minorities are in need of legal protections. Indeed, the country’s LGBT population turns out to have less right to protection than an unborn fetus. In addition, citizens are to no longer pay heed to evidence-based and science-based arguments when they may call into question the practices of alleged societal customs. 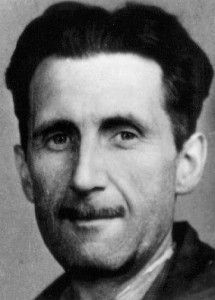 Donald Trump’s Use of Language

You might find the scenario laid out above farfetched. Yet it correlates well with the way Donald Trump uses language, as well as his devaluing of any objective standard for truth. Thus, President Trump’s persistent combination of gross exaggeration and “alternative facts” gives many of his public statements an Orwellian odor.

In his ghost-written book The Art of the Deal, Trump is quoted as stating that “if you tell people a lie three times, they will believe anything.” No doubt he has told himself this more than three times, for he now seems to live his public life by this tenet. There are fantastic and untrue self-aggrandizing claims such as, because of the changes Trump is initiating, “our children will grow up in a nation of miracles,” and “we have done more in five months than practically any president in history.”

There are also fantastic and untrue negative claims such as some 3 million votes were cast illegally in the presidential election – all of them apparently for Hillary Clinton- and “[President] Obama founded ISIS, literally.” According to the Washington Post’s Fact Check project, “President Trump has made 1,318 false or misleading claims over [his first] 263 days [in office]. Many of these claims are repeated over and over again – significantly more than three times.

Turning Back the Clock

Forbidding specific terminology from the budget language of HHS departments constitutes one avenue of attack against those who refuse to believe Trump’s innumerable lies. You might not believe his fantasies, but you are not to use “evidence-based” counter-arguments if you operate within the executive branch bureaucracies he ultimately controls.

Of course, the implicit censorship inherent in ideology has always played a role in U.S. politics. And the ultra-conservative ideology behind the “seven forbidden words” gambit has been around for a long time. It dominated economic policy until the New Deal and social policy until the Civil Rights Movement. By modern standards it brought disaster in both realms. So why would anyone want it back? Maybe because the aims of greater economic and racial/ethnic equality make some white citizens feel disempowered and uncomfortable. One way to address that discomfort is to turn the clock back. To do this, you just restructure reality by labeling those parts that you don’t like as “fake.” Trump does this almost daily.

The strategy of eliminating the official use of words like “diversity,” “vulnerable,” “entitlement,” “transgender,” “evidence-based,” “science-based,” and “fetus” is part of this effort to turn the clock back. Maybe then, so the story goes, with no words to express these concepts, the uncritical minds of our time will be – as Syme the philologist predicts – unable to think unorthodox thoughts.