Exclusive: The Trump administration’s hypocrisy was on clear display when it denounced Iran over an ineffectual Yemeni missile that landed in Saudi Arabia while the U.S. aids the Saudi slaughter of Yemeni civilians, says  Jonathan Marshall.

Political charlatans like Donald Trump often employ an essential trick from stage magic: misdirecting the audience. By taking the public’s eye off the real issues and channeling discussion toward made-up controversies, they can keep working their agenda in the shadows.

U.S. Ambassador to the United Nations Nikki Haley has been quick to learn that technique from her mentor in the Oval Office. Last week, in a performance reminiscent of Secretary of State Colin Powell’s UN speech before the Iraq War, she staged a highly publicized demonstration of alleged Iranian perfidy: bits and pieces of a missile fired on Nov. 4 by Houthi rebels in Yemen toward Saudi Arabia’s King Khalid International Airport outside of Riyadh.

“When you look at this missile, this is terrifying, this is absolutely terrifying,” Haley asserted. She said the scraps included “parts made by Iran, some by Iran’s government-run defense industry. All are proof that Iran is defying the international community.” In particular, she claimed that Iran is violating a United Nations Security Council resolution banning it from engaging in transfers of ballistic missiles — an annex to the Security Council’s endorsement of the Iran nuclear deal.

Critics quickly shot holes in her case. For one thing, the Security Council’s resolution actually says “Iran is called upon not to undertake any activity related to ballistic missiles designed to be capable of delivering nuclear weapons . . .” “Called upon” is not the same as a ban. Nor would any serious expert confuse Houthi rockets with nuclear-capable ballistic missiles.

In addition, the New York Times noted, “Defense officials said they could not say exactly when the weapons . . . were given to the Houthis, which means that they could have been transferred before the Security Council resolution was enacted.”

Nor could a U.N. panel of experts even confirm that Iran had supplied the missiles; analysts at IHS Jane’s raised the possibility that Houthi rebels modified foreign missiles purchased by Yemen’s military before the outbreak of war. Although Haley put on display an Iranian-made component that was allegedly part of the missile, one reporter noted that the debris also contained an American-made part used to circulate liquid fuel propellant.

“Unless someone can provide a direct smoking gun, such as a shipping manifest or other documents which clearly identify the weapons and how they were sourced, this is simply speculation to further support the administration, Saudi, and Israeli case to militarily confront Iran,” said Rob Richer, former associate deputy director for operations at the CIA.

Haley’s show was pure misdirection. No serious analyst of the region doubts that Iran has given at least some limited material support to the Houthi rebels who control a sizeable portion of Yemen, including its capital, Sanaa. 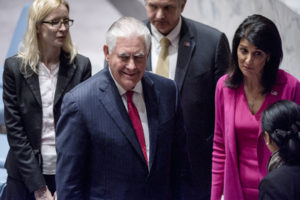 The question of whether Iran also smuggled a small number of relatively crude missiles to the Houthis should hardly weigh too heavily on anyone’s moral scales when Saudi Arabia and its allies have been pounding Yemen since March 2015 with high-explosive bombs, mostly supplied by the United States and Great Britain.

As former CIA analyst and presidential adviser Bruce Riedel said of Riyadh’s vocal outrage over the ineffectual Houthi missile attack, “They desperately want to change the conversation away from starving children to Iranian bad guys.”

Or as Iran’s foreign minister put it in a tweet, Saudi Arabia “bombs Yemen to smithereens, killing 1000s of innocents including babies, spreads cholera and famine, but of course blames Iran.”

The Houthis fired off their missile — which killed no one — just days after a Saudi-led airstrike at a market in northern Yemen killed at least 25 civilians.

Immediately after the Houthi retaliation, the Saudi coalition bombed Yemen’s international airport and closed all the country’s other air, land, and seaports, putting in dire peril some 7 million people deemed by humanitarian agencies to be immediately at risk of famine.

The Saudi blockade also made it almost impossible for medical workers to contain the spread of cholera, which has sickened nearly a million people. The international aid group Save the Children estimated that 50,000 Yemeni children under the age of 5 could die by year’s end.

“It is very clear that if you are using starvation as a weapon you are in breach of international humanitarian law,” said Penny Mordaunt, the British government’s international development secretary.

The U.N.’s human rights office recently accused the Saudi coalition of further killing at least 136 non-combatants from Dec. 6 to 16. Targets of its bombs included a TV station, a hospital, and a wedding party. The hospital was in the Red Sea port of Hodeida, the country’s main point of entry for food. Some close observers predict an imminent attack by the Saudi coalition to oust Houthi rebels from the city — a move that one of Oxfam’s senior executives said would “breach international humanitarian law” and result in “near certain famine.”

President Trump earlier this month called on the Saudi government to permit “food, fuel, water, and medicine to reach the Yemeni people who desperately need it.” It’s hard to take his words seriously, however, after Reuters’ report that “Saudi Arabia has agreed to buy about $7 billion worth of precision guided munitions from U.S. defense contractors . . . in a deal that was part of a $110 billion weapons agreement that coincided with President Donald Trump’s visit to Saudi Arabia in May.”

Nonetheless, there are serious rumblings of concern in Congress, even among Republicans, over the humanitarian disaster in Yemen. Senator Todd Young of Indiana, a Republican member of the Senate Foreign Relations Committee, recently pressed Trump’s nominee to the State Department’s top legal office about the implications of Saudi Arabia’s blockade on international aid to Yemen.

And just last month, the House of Representatives voted overwhelmingly to condemn the killing of civilians in Yemen and to demand that the warring parties “increase efforts to adopt all necessary and appropriate measures to prevent civilian casualties and increase humanitarian access.”

By itself, to be sure, that was a toothless measure, but it’s a sign that anti-Iran sentiment on Capitol Hill has not blinded legislators to the crimes being committed by the Saudi coalition in Yemen. So far, at least, Nikki Haley’s tricks have failed to divert the world’s attention.

Jonathan Marshall’s articles on Yemen include “How US Policy Helps Al Qaeda in Yemen,” “The West’s Moral Hypocrisy on Yemen,” “Belated Pushback on Saudis’ War on Yemen,” and “How Washington Adds to Yemen’s Nightmare.”