Though sold as a pain-free tax cut for most Americans, the Republican plans favor the rich and carry hidden dangers for Social Security, Medicare and other key social programs, as Dennis J Bernstein describes.

The Democrats and the entire progressive community are up in arms about the Republican tax-cut plans, which budget experts say will shower the wealthy with tax breaks while raising taxes on some middle- and working-class families. The plans also could flood the federal debt with another $1.5 trillion in red ink over the next decade. 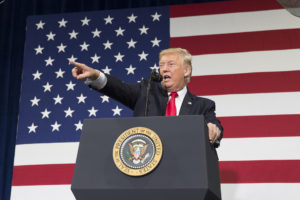 The legislation is now in the hands of the U.S. Senate where some modifications are expected in order to bring onboard a few Republican holdouts, but the Senate version does not play well either with critics alarmed about the potential debt-induced raid on Social Security and other key social programs.

Rep. Ro Khanna, D-California, put it this way: “Not only would the GOP tax plan blow a hole in the deficit, but as a result, it would trigger major cuts to programs that many Americans depend on, including a $25 billion cut to Medicare. This plan is a disaster for the middle class….[It] clearly demonstrates that they think it’s better to serve the interests of the very wealthy than everyday people. Shareholders and corporate executives do not need any more favors handed to them.”

What follows is an in-depth primer, from a progressive perspective, on the tax cut legislation. I spoke about it with Josh Hoxie on Nov. 21 in Boston. Hoxie has studied the proposal extensively and written about it as well. He is the Co-Editor of Inequality.org, based at the Institute for Policy Studies in Boston.

Dennis Bernstein:  Let’s start with some background on the Estate Tax. What is the estate tax and how was it established?

Josh Hoxie: About 100 years ago, Teddy Roosevelt and a few others saw that wealth was concentrating in fewer and fewer hands.  We had a funneling of wealth up to the upper class and the rest of the country was struggling.  They decided that we ought to have a levy on the inter-generational transfer of immense wealth.  When so much money concentrates in so few hands, it is bad for everyone.

Today this tax is levied on wealth dynasties of $7 million for married couples or $5.5 million for individuals.  It is probably the most progressive aspect of our tax code.  It is incredibly important, not just for raising revenue, but for controlling the runaway inequality we are witnessing in America today.

Dennis Bernstein: Does the estate tax actually deal with the issue of inequality?

Josh Hoxie: If you have a fortune and can do whatever you want with that fortune when you die, you should think about how your money was made.  I can guarantee that every great fortune in the United States was in some way enabled by the public sector: the roads you drove on, the schools that educated your workforce, the intellectual property rights that protected your intellectual property, and so on down the line.

One way we think of the estate tax is as “economic opportunity recycling.”  Paying forward the benefits that you had to create your fortune to the next generation so that they can get ahead too.  Without an estate tax, the only people who benefit from your fortune are the genetic lottery winners who happen to be born to multi-millionaire and billionaire parents.  With an estate tax, that opportunity gets spread around a little bit.

Dennis Bernstein: Trump says that eliminating the estate tax is going to bring money to the middle class.  You say it is ultimately going to cost all of us $260 billion in inequality.  How do you come to that figure?

Josh Hoxie: The Senate Joint Committee on Taxation came to that figure.  If we get rid of that tax, that is how much won’t be raised.  So it comes out of the public coffers and into the hands of the wealthiest people in this country.  The most regressive thing you can do is take money away from the Program for Women and Infant Children (WIC)–which half of the children in this country rely on for basic nutrition–and give that money to the wealthiest people who need it the least.

Dennis Bernstein: You wrote a piece that appeared recently in The Las Vegas Sun.  Can you say more about how this would significantly widen the racial wealth divide?

Josh Hoxie: When we look at who has the wealth in this country, we find that it is incredibly concentrated by race.  Essentially, White families have hundreds of thousands of dollars in assets, while the median Black family has a few thousand.  So we are talking about a hundred-to-one ratio.  And it is similar for Whites-to-Latinos.

When you look at who pays the estate tax, it is proportionately White folks who have tons of money but the money is held in disproportionately White hands.  That is the result of a legacy of racist public policy that goes back to red-lining in our cities, the legacy of slavery, and income disparities that extend to today.

Dennis Bernstein: How would you critique the focus of this new tax plan?

Josh Hoxie: It is hard to criticize strongly enough the Trump tax cuts.  They could mean irreparable damage for generations to come.  This is a money grab.  This is done on party lines, jammed through Congress, backed by multi-millionaires and billionaires for their exclusive benefit.

It is bad economics but more than that it is morally reprehensible.  In an age where one in five children is food insecure, we are going to cut basic public programs in order to give this tax break to people who need it the least in this country!

We have the first billionaire president and the wealthiest cabinet in history.  And we have never had so much money in our campaign finance system.  So this is not being done for congressional constituents, it is being done for wealthy billionaire donors.

Dennis Bernstein: What programs are going to be cut, who is going to suffer?

Josh Hoxie: The Trump tax cuts will create such a major hole in the federal budget that they will preempt mandatory spending cuts in Social Security, Medicare and Medicaid.  They are bringing back something called “chained CPI” which translates to less money for seniors.  Social Security is the most successful anti-poverty program in American history.  Before Social Security came around, half of people over 65 lived in poverty.  Now it is less than 10 percent, largely thanks to Social Security.

I think it is just now coming out, all the insidious ways that this wealth grab is going to affect all the non-wealthy people in this country.  A lot of people will see their taxes go up.  Graduate students are going to see their costs go up fivefold.  This is just mean on its face.

Dennis Bernstein: Are corporations and the wealthy spending a lot of money to make sure this goes through?  And how will the Trump family make out?

Josh Hoxie: Donald Trump likes to claim that he is worth $10 billion.  If we take him at his word, eliminating the estate tax would mean $4 billion for his kids.  The Walton family stands to benefit enormously, as do the beneficiaries of the Koch brothers.  There is a carve-out in the Trump tax cuts for private jet owners and alongside it is a fee increase for ordinary commercial flight passengers!  That is indicative of who is in the room when these things are decided.

Dennis Bernstein: What did we learn about these people from the Panama Papers?

Josh Hoxie:  Two major leaks have come out regarding offshore tax shelters: The Panama Papers came out last year and The Paradise Papers came out this year.  Essentially, we know that there is an untold amount of money hiding in offshore tax shelters.  We still don’t know how much money is concentrated at the very top.  We do know that it is not small businesses who are putting away money in these tax havens.  It is corporate CEO’s, corporations themselves, shady entities.

The whole premise of trickle-down economics is that if you give money to the top they will spend it and it will benefit everyone else.  That has never happened, but even if you took them at their word, if the money is hiding in an offshore tax shelter, how is that ever going to benefit anyone else?

It is hard to overstate what happens when so much money concentrates in so few hands.  Basically, we are seeing our politics, our civil society, our philanthropy dominated by the very rich, who care about no one but themselves and their country club friends.