The Russia-gate frenzy is reaching into the ranks of non-mainstream journalists with the House Intelligence Committee’s subpoena of Pacifica’s Randy Credico, who compares this witch-hunt to the McCarthy era, reports Dennis J Bernstein.

The House Intelligence Committee, as part of its Russia-gate investigation, has issued a subpoena demanding the testimony of journalist-activist-and-satirist Randy Credico presumably because he produced a series on WikiLeaks founder and editor Julian Assange, who oversaw the publication of leaked Democratic Party emails in 2016. 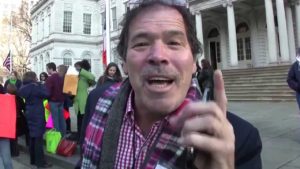 “Joe McCarthy is back,” said Credico, who traced the committee’s actions “to my 14- part series on Assange, ‘Julian Assange: Countdown to Freedom,’ which includes Wikileaks founder, Julian Assange, his mom, and some of the most significant U.S. government intelligence agency whistle blowers in modern history. They [the Russia-gate investigators] also abhor my recent visits with Assange [at the Ecuadorian embassy in London], where he is still in exile after five and a half years.”

Credico, a journalistic contributor to the Flashpoints program on Pacifica Radio, was served the subpoena through his lawyer Martin Stolar in New York City. The subpoena was dated Nov. 27 and followed a request for Credico’s “voluntary” testimony that he rebuffed. The subpoena demands Credico’s appearance on Capitol Hill on Dec. 15.

A letter dated Nov. 9 from Rep. Adam Schiff, the ranking Democrat on the House Permanent Select Committee on Intelligence, in effect, demanded Credico’s “voluntary” cooperation with the panel’s “bipartisan investigation into Russian active measures directed at the 2016 US election.”

Schiff also requested “the preservation and production of all documents, records, electronically-stored information, recordings, data and tangible things, including but not limited to graphs, charts, photographs, images and other documents, regardless of form other than those widely available (e.g. newspaper articles) related to the committee’s investigation, your interview and any ancillary matters.”

Credico told the Flashpoints show that he would not give testimony voluntarily and, if subpoenaed, he would not cooperate with the House Intelligence Committee’s Russia-gate investigation. His lawyer informed the committee of Credico’s position and was told that Credico would receive a subpoena to compel his testimony.

I spoke with Credico in New York City on the morning of Nov. 27 before the subpoena arrived.

Dennis Bernstein: I am looking at a letter dated Nov. 9, 2017. It says, “Dear Mr. Credico, as part of its bipartisan investigation into Russian active measures directed at the 2016 US election, the House Permanent Select Committee on Intelligence requires that you participate in a voluntary, transcribed interview at the committee offices.”  What is this letter about and what is your response?

Randy Credico: I have no idea what they want from me specifically. I did a 14-part series on Julian Assange.

Dennis Bernstein: I want to read a little more from this letter. It says, “We respectfully ask that you produce to the committee by no later than November 24 your availability for the interview during the time identified above.” You’re not going, are you?

Randy Credico: I have declined to voluntarily testify. The counsel for the committee told my lawyer that I would be subpoenaed.

Dennis Bernstein: Will you respond to a subpoena?

Randy Credico: I am very reluctant to give credence to a broad-based witch hunt such as this.

Dennis Bernstein: Let me read on: “This letter also requests preservation and production of all documents, records, electronically-stored information, recordings, data and tangible things, including but not limited to graphs, charts, photographs, images and other documents, regardless of form other than those widely available (e.g. newspaper articles) related to the committee’s investigation, your interview and any ancillary matters.”

Randy Credico: It certainly sounds like a form letter. Look, I don’t like Trump anymore than anyone else. There are ways that they can get him legally, but to use this Russia-gate thing is a false premise. They are throwing the net too wide and they are spending a lot of money on this. Meanwhile, people are being deported to Haiti, to El Salvador, we’re not taking care of business in Puerto Rico. We have this new tax bill which is about to destroy the middle class and the poor. We have two and a half million people in prison. These are the issues they should be talking about in Congress, but they are not.

Look, they have yet to request an interview with Julian Assange. They know they are not going to get anything that is satisfactory to them and that this would force their hand.

Dennis Bernstein: We depended on you, Randy, to report on the New York Police Department during very violent times. You made the current mayor of New York swear that he would put an end to stop-and-frisk.

Randy Credico: I hope I got the word out not only about stop-and-frisk but about the horrible criminal justice system in New York City.  This is the Deep South.  We always focus on Alabama and Mississippi but the same thing goes on here. The judges are 95% white and the prosecutors are 95% white and mostly male. When I ran for governor I focused on Attica and Sing-Sing and all these other dungeons that should be closed. I learned a lot from Bill Kunstler about focusing on where you can be impactful.

Dennis Bernstein: Why have you devoted so much time to Julian Assange’s story?

Randy Credico: It would be the same thing if they were trying to snuff your voice out. This man is an important journalist. A lot of journalists in the corporate media have abandoned him. He has suffered so much, his family has suffered, he hasn’t been able to see his kids for five years. And yet he continues to publish, even in his present circumstances.

Dennis Bernstein: Finally, what is the significance of this kind of congressional witch hunt?

Randy Credico:  This is a replay of the 1950s, of the Palmer Raids earlier. This is a very significant moment. A person can still be blacklisted. And it is being done by Democrats! What bothers me most is the fact that you have people from the intelligence community who get to testify publicly and without challenge. People like me have to do it privately.