During the “war on terror,” the U.S. government has understated the number of civilians killed (all the better to manage positive perceptions back home). But a new report underscores the truth, says ex-CIA analyst Paul R. Pillar.

Anyone willing to think carefully and critically about the use of armed force against a target such as Islamic State (ISIS) would do well to read the intensively researched piece in the New York Times by investigative journalist Azmat Khan and Arizona State professor Anand Gopal about civilian casualties from the air war waged by the U.S.-led coalition in Iraq. The key conclusion is that those casualties are far higher — probably many times higher — than what the U.S. military acknowledges.

Such a discrepancy has been suspected for some time, based on earlier work by private organizations that comb press reports and other publicly available information from afar. Khan and Gopal went beyond that work by selecting three areas in Nineveh province as samples in which they performed an exhaustive on-the-ground investigation, interviewing hundreds of residents and sifting through the rubble of bombed structures. They compared such direct evidence, incident by incident, with what the responsible U.S. military command said it had in its records about airstrikes it had conducted in the area and the results of those airstrikes.

The authors were given access to the operations center at a U.S. airbase in Qatar that has directed the air war, and their article includes the U.S. military’s side of this story, with a description of the procedures used to select targets and assess damage, including civilian casualties. The impression left is not one of willful deception or malfeasance. Rather, the problem is partly a matter of lacking the time and personnel to do the sort of detailed after-the-fact, on-the-ground investigation for every target that Khan and Gopal did with their sample.

It is partly a matter of deficient record-keeping. It is in large part a matter of the fog of this kind of war making much faulty and woefully incomplete information almost inevitable. Although some of the civilian casualties represent collateral damage in the form of people who were in the vicinity of bona fide ISIS targets, others were in places that the targeteers mistakenly identified as having an ISIS connection.

The conditions in which civilians were living when under ISIS control worked against accurate analysis by the military of potential targets, which relied heavily on aerial observation. The observing of people going in and out of buildings in what looked like normal everyday activity was taken as a sign either that the building itself was a normal civilian structure or that there were too many innocent people in the immediate vicinity to hit it.

The absence of such innocent-looking activity tended to be taken as confirmation of any other reason to suspect that malevolent ISIS operations were going on inside. But in the so-called caliphate of ISIS, many people who otherwise would have been moving around freely tended instead to stay indoors at home. They in effect had the choice of increasing their exposure to the vagaries and brutality of ISIS or of raising suspicion at that airbase in Qatar that their home had something to do with ISIS.

Khan and Gopal are unable to extrapolate from their data, being only a sample, to any comprehensive number of innocent civilians killed and wounded in this air war. They note, however, that the concentration of civilian casualties is likely to be even higher in some areas, such as the western part of Mosul, where ISIS held out longer against coalition bombardment than it did in the areas that the authors investigated.

These findings provide disturbing food for thought in at least three respects. One concerns the values and morality involved in a U.S. military operation in which so many innocents suffer so much. The human faces that Khan and Gopal attach to some of the specific cases of suffering they have investigated underscore the fundamental wrongness of what has been occurring. 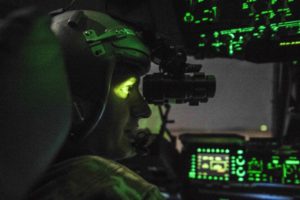 A second concerns the counterproductive aspects of an offensive that is supposed to be a combating of terrorism. The Donald Rumsfeld question — are we creating more terrorists than we are killing? — is still quite pertinent. The unsurprising resentment against the United States that results from U.S. aircraft killing and maiming innocent people, or destroying their homes, tends to create more terrorists.  At a minimum, it fosters the sort of sentiment that existing terrorists exploit and win them support.

A third implication involves the ability of the American public and political class to assess adequately what is going on with a military campaign of this sort. The biggest problem as always is an unwillingness to pay adequate attention to information at our disposal.

But in this case there is the added problem of bum information. Khan and Gopal write that the huge disparity between official numbers and probable actual figures of civilian casualties means this aerial offensive “may be the least transparent war in recent American history.”

There are important policy decisions ahead about a continued U.S. military role, if any, in the areas where the ISIS caliphate once stood. Civilian casualties, and the importance of having an accurate sense of the extent of casualties that our own forces cause, need to be part of any debate about those decisions. But probably the lessons of the anti-ISIS air war apply at least as much to other states and regions where the United States has assumed the role of aerial gendarme, using either manned or unmanned means, against groups such as ISIS or al-Qaeda.

One thinks in particular of Afghanistan and Pakistan, but in the absence of any geographically defined Congressional authorization for such use of force, there is no limit to where the United States will bombard from the sky and where, given the intrinsic difficulties in assembling accurate targeting information against such shadowy adversaries, more innocent civilians will die. This is one of the continuing dark sides of a “war on terror” that has been militarized to the extent that ill-chosen metaphor implies.

32 comments for “Undercounting the Civilian Dead”