The holiday now celebrated as Veterans Day – to thank American soldiers  – started as Armistice Day, a time for reflection on the horrors of war after millions died in World War I, as Gary Kohls recalls.

One year shy of a century ago, on Nov. 11, 1918, at precisely 11 a.m. Paris time, a cease-fire (aka “truce” or “armistice”) was agreed to and signed by military negotiators from France, Britain and Germany. The terms of the truce ultimately resulted in the end of the “War to End All Wars” seven months later when the Treaty of Versailles was signed on June 28, 1919.

Trench warfare during World War I.

Germany’s surrender to the Allies was regarded as the prudent thing to do after Kaiser Wilhelm’s tyrannical monarchy was overthrown by democratic socialist forces earlier in 1918. Erich Ludendorf, a classic example of Prussian militarism, was one of the German generals who first broached the idea of starting the negotiations that eventually led to Germany’s surrender.

Ludendorf saw that 1) Germany’s army was terminally exhausted, demoralized and poorly equipped; 2) the United States had finally entered the war with fresh troops; 3) the fledgling government at home was in disarray; 4) the war had bankrupted the nation (as all wars eventually do – unless there is enough looting and plundering of the occupied territories); 5) civilians at home were starving; and 6) victory was an impossibility. The writing was on the wall; Germany had no choice but to surrender.

According to the terms of the armistice, Germany agreed to immediately evacuate all occupied territories within two weeks and to surrender 5,000 cannons, 25,000 machine guns, 1,700 planes, and all German submarines. All Allied prisoners of war were to be released by Germany immediately, but German POWs were not to be released until a peace treaty was signed sometime in the future.

The year after the war ended, most of the national leaders that considered themselves victors proclaimed Nov. 11 to be a day of reflection on the horrors of war and for prayers that there never would be another war. All businesses were ordered to stop work for two minutes and stand in silence at exactly 11 a.m., a tradition that continued in the decades that followed. It was called Remembrance Day in the United Kingdom and Armistice Day in the United States.

Nov. 11 was intended to be a day of mourning and repentance for the satanic carnage that killed about 10 million soldiers, wounded another 20 million and inflicted more than 2 million civilian deaths.

The senselessness of that war should have resulted in the courts-martial of every gung-ho officer, the demeaning of every war-mongering politician, and the decertifying of every war-profiteering corporation. But it did not. The warmongers and war-profiteers just went into hibernation.

But the war did result in the dissolution of four empires, their emperors and kings, and the assorted aristocrats and sycophants who had been so cruelly ripping off the multitudes of poor people for so many centuries. The four empires that collapsed were the German, Austro-Hungarian, Russian and Ottoman empires. And good riddance it was.

Of course, Germany did not celebrate Armistice Day because that Nov. 11 and the date of the signing of the Treaty of Versailles (that formally ended the war) were regarded by many Germans as the dates of treasonous acts committed by Germany’s new civilian democratic leaders who signed the documents – holding blameless the German military officers who suggested that the German army surrender in the first place.

The Nov. 11 date was despised by patriotic “Deutchland Uber Alles” Germans, especially the right-wing, pro-monarchist, proto-fascist and “Germany First” nationalists who repeatedly used the “Stab-in-the-Back” and “November Criminals” deception to weaken and then overthrow the Weimar Republic’s experiment in democracy.

After 12 years of pro-war propaganda from militarists like Adolf Hitler, Ludendorf and the Nazi Party, democracy never had a chance, especially with all the economic turmoil that followed the war and the 1929 Wall Street crash that spread mass unemployment around the world.

According to Wikipedia, the “Stab-in-the-Back” Myth is the notion, widely believed and promulgated in right-wing, pro-militarist circles in pre-Nazi Germany, that the Imperial German Army did not lose World War I, but rather the German military had been betrayed by the civilians on the home front, especially the pro-democracy groups that overthrew the tyrannical monarchy during the German Revolution of 1918-19.

The Fading of Reflection

Still, elsewhere the tradition of Nov. 11 continued. In 1926, the U.S. Congress passed a resolution declaring that Armistice Day should be a day of “thanksgiving and prayer and exercises designed to perpetuate peace through goodwill and mutual understanding between nations.” In 1938, Congress made Armistice Day an official holiday that was explicitly dedicated to perpetuating world peace. But world peace would not last. 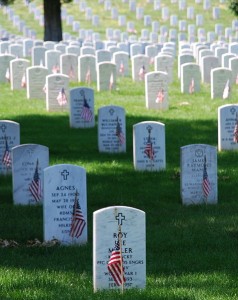 For some, the horrors of World War II reinforced the need to further abhor war. General Omar Bradley delivered an Armistice Day speech in 1948, chastising those who placed their trust in military dominance. He said: “We have grasped the mystery of the atom and rejected the Sermon on the Mount. The world has achieved brilliance without wisdom, power without conscience. Ours is a world of nuclear giants and ethical infants. We know more about war than we know about peace, more about killing than we know about living.”

But the military and economic entities that are in control of the world didn’t take Bradley’s admonition seriously. In the post-World War II years, the U.S. was sensing that it could easily establish a powerful global empire. The CIA – created in the years following World War II – was feeling its oats and the Department of War was name-changed to the Department of Defense. Planetary, full-spectrum military and economic dominance by the U.S. was a possibility.

To promote these imperial objectives, anti-war and pro-peace sentiments had to be suppressed. Peace-loving holidays like Mother’s Day, Memorial Day, Armistice Day and Labor Day needed to be de-emphasized or co-opted. And so they were. The process was so subtle that the public never flinched.

In June 1954, President Dwight Eisenhower signed a bill changing the name of Armistice Day to Veterans’ Day. The stated purpose of the new holiday was “to thank all veterans who had served the United States of America.”

America’s neglected or wounded military veterans applauded the change in the Nov. 11 holiday as they seemed to appreciate being thanked for their service, even if many resented the empty sentiments.

One of the (perhaps intended) consequences of the gradual change away from the emphasis on peace was the amnesia over the horrors of war. Both adults and children were easily brain-washed into mindlessly glorifying the diabolical. Keeping America militarily strong was emphasized. In the halls of Congress and in the White House ever since World War II, there was little consideration of the cruelty, stupidity and futility of war.

In our corrupt capitalist society, there is just too much money to be made by war-profiteering corporations and wealthy investors when there are potential military conflicts brewing. The stocks of war industries surge when Donald Trump tweets about bombing foreign nations. And then there are legions of major media outlets that are always ready and willing to cheerlead for wars and rumors of war.

On Veterans Day in America today, none of the people in power are sincerely praying or working for a truly sustainable peace, even during the obligatory two minutes of silence.