President Trump has made clear his anger about “leaks,” but he is far from alone among recent U.S. presidents waging war against whistleblowing, write Jesselyn Radack and Kathleen McClellan for ExposeFacts.

By Jesselyn Radack and Kathleen McClellan

The Trump administration has declared a war on media leaks and called for the U.S. federal workforce and contractors to receive “anti-leak” training. The centerpiece of Trump’s anti-leak campaign, aside from early morning tweet-storms railing against leakers and media, is the National Insider Threat Taskforce. 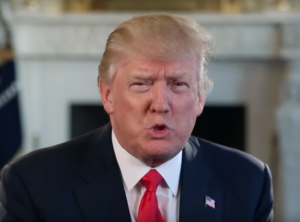 As recently as last month, the Department of Defense has developed training courses, toolkits, templates, posters, and videos, all aimed toward silencing and deterring anyone who would disclose to the press or the public information that the government wants kept secret for no legitimate reason and that the public has an interest in knowing. It is not only federal employees who receive these trainings, but tens of thousands of government contractors as well. Companies with any classified access are required to implement an “Insider Threat Program,” an insidious presumption that employees cannot be trusted.

Part of the “Unauthorized Disclosure” training includes watching a Fox News clip on the crackdown on leaks and Attorney General Jeff Sessions’s statement announcing an increase in criminal leak investigations. A student guide from the Insider Threat Awareness training includes the McCarthyesque request that employees report on each other for “general suspicious behaviors,” including “Questionable national loyalty” such as “Displaying questionable loyalty to U.S. government or company” or “Making anti-U.S. comments.” Never mind that the only oath government employees take is to the U.S. Constitution, not to any government official or the U.S. government itself and certainly not to a private company.

The many secrecy trainings come with promotional posters with unsophisticated rhyming slogans cringe-worthy to First Amendment advocates and marketing professionals alike, such as “There no delete when you tweet” or “Tweets sink fleets.” The poster with the slogan “Every Leak makes us weak” is accompanied by a melting American flag info-graphic. Then there’s the most anti-press poster, a mock newspaper website with the slogan “Think before you click,” complete with a red, Trumpian-style, all caps “IT’S A CRIME” at the bottom. The messaging is so heavy-handed it would be funny if the consequences weren’t the freedoms of speech and the press. 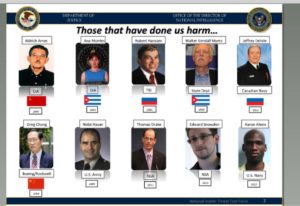 U.S. government poster that uses photos of whistleblowers interspersed with  murderers and spies.

Finally, there’s the laughably inaccurate and awkward slogan “Free speech doesn’t mean careless talk.” Actually, it does. Free speech does not mean screaming “FIRE” in a crowded theater, but there is no Supreme Court ruling holding that “careless speech” is somehow exempt from First Amendment protections, lest our President’s Twitter feed be censorable.

There is an “unauthorized disclosures” video training from September 2017 billed as “compliant with White House and Secretary of Defense Memoranda” that condemns leaks, points out punishment for leakers, and warns apocalyptically that when there are unauthorized leaks, “we all risk losing our way of life.”

Another informational video includes a fictionalized news story about Americans dying in a terrorist attack because of a release of classified information. Such a story has never appeared in the actual news media because it has never happened. In Chelsea Manning’s criminal case – worth mentioning since her leaks are consistently singled out in the videos – the government was unable to provide a finalized damage assessment, even though the leaks occurred years prior. (Curiously, Edward Snowden’s even more-well known leaks are not mentioned by name in the videos.)

The Insider Threat Program trainings do not send a simple message against leaking properly classified information, such as nuclear launch codes or covert identities. Rather, the trainings send much more destructive messages against all leaks and speech the government does not like: do not criticize the government or you will be reported as an insider threat and keep all government secrets, even when the government breaks the law. These are messages contrary to a free and open democratic society, especially one where the First Amendment protects freedoms of speech, association, and the press.

The training videos go beyond simply urging employees to keep quiet. Employees are instructed not to access or share information already in the public sphere. Considering that every major newspaper includes almost daily leaks of classified information, such an instruction is impossible to comply with, and will almost certainly be used, as it has in the past, to retaliate against whistleblowers. After all, the biggest leaker of classified information is the U.S. government itself.

Jesselyn Radack was a whistleblower at the Department of Justice under the Bush administration and now heads the Whistleblower and Source Protection Program (WHISPeR) at ExposeFacts, where she has provided legal representation for clients including Edward Snowden, Thomas Drake, and William Binney. Kathleen McClellan is the Deputy Director at WHISPeR. [This article originally ran at ExposeFacts at https://exposefacts.org/insider-threat-program-training-and-trumps-war-on-leaks-a-chilling-combination-for-whistleblowers/ ]

← Why the Vengeance Toward Sgt. Bergdahl
Blaming Russia for the Internet ‘Sewer’ →