Almost a century ago, European powers promised the Kurds a state but soon reneged on the deal, leaving Kurdish nationalists to fume for generations and leading to Iraq’s recent military capture of Kirkuk, reports Lawrence Davidson.

It was in 1916, in the midst of World War I, that Britain and France (pitted against the Germans, Austrians and Ottoman Turks) made their infamous Sykes-Picot agreement. In grand imperial style, they used this agreement to divide up the Middle East between them. 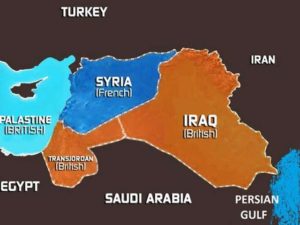 A map of the Middle East as envisioned by the Sykes-Picot agreement.

It was a daring move, considering that the war was at a stalemate and the two allies did not know if they were going to win the struggle. Nonetheless, they went ahead with the agreement and in doing so made a number of decisions that continue to shape the region to this day.

Besides bringing traditional European imperialism forward into the Twentieth Century, what made Sykes-Picot infamous was the fact that it broke a significant previous promise made to the Arabs. By 1916 the Arabs had taken to the battlefield against the Turks. For their doing so, the British had promised to support the creation of a large Arab state.

But this promise had always clashed with the imperial ambitions of Britain and France, and so, in the end, they secretly conspired to betray their non-Western ally. Among the eventual consequences of this betrayal, the “Arab state” was confined to what is, today, Saudi Arabia; Palestine (which originally was to be part of the Arab state) would become a “national home for the Jews”; Syria went to the French, and much of the rest of the region was given over to the British.

The Sykes-Picot agreement allowed for one further change. It made possible a state for the Kurds – a people who constituted the fourth largest ethnic group in the Middle East. This state, known as Kurdistan, was to be carved out of territory within the eventually defeated Ottoman Empire. This intent was publicly confirmed in the Treaty of Sevres in 1920.

The Kurdish leaders, who by this time must have been aware of the Western powers’ betrayal of the Arabs, therefore should not have been surprised when, despite the treaty, the British and French betrayed them as well. The 1923 Treaty of Lucerne amended the Treaty of Sevres, and sure enough, the state of Kurdistan was omitted. The lands that would have made up the Kurdish nation instead become parts of Turkey, Syria and Iraq. Thus, the Kurds remained stateless. However, they never gave up statehood as a goal.

Now we can fast-forward to March 19, 2003, the date that President George W. Bush took the fateful step of invading Iraq. Bush had an array of flimsy excuses for doing this: Saddam Hussein’s non-existent nuclear weapons and other WMD, Saddam’s alleged plot to assassinate Bush’s father, the dream (really the nightmare) of forceable “regime change” as a way of making the Middle East safe for the U.S. and Israel, or perhaps just the cutting loose of neoconservative bellicosity. Whatever the President’s depth of ignorance led him to anticipate, the invasion set loose forces that Bush and his White House successors have been unable to control. Among these are the consequences that followed the falling apart of Iraq.

A map showing how Kurdish “territory” spills over into several Mideast nations.

Like the Arabs in World War I, the Kurds became a fighting ally of the West in the aftermath of the invasion of Iraq and the subsequent Syrian civil war. The region’s chaos allowed for the emergence of the “Islamic State of Iraq and the Levant” (aka ISIS, ISIL, and Daesh). ISIS turned out to be a grim and brutal manifestation of religious fanaticism run amok. Its growth threatened just about every state in the region, as well as the citizens of the European Union and the U.S.

If stability was to eventually prevail, ISIS had to be defeated, and the Kurds played (and continue to play) a notable role in this fight. There is little doubt that one of their goals in doing so is to create favorable conditions for a Kurdish state.

For all those regional powers (Turkey, Iran, Syria, Iraq) seeking to reestablish the status quo ante, the prospect of an independent Kurdish state is anathema. Each state has Kurdish minorities and is afraid that an independent Kurdistan, even one carved out of another state’s territory, would lead to or exacerbate Kurdish insurgencies in their own countries. The possibility that such a state might instead cause a lessening of minority Kurdish restiveness through voluntary immigration seems not to have occurred to the leaders of Iran, Turkey and Syria.

As Jonathan Cook has recently made clear, the question of Kurdish independence has been complicated by Israeli influence in this matter. The Israelis have long been keen on an independent Kurdistan not because, as some of their politicians disingenuously claim, the Kurds have a “moral right” to a state (so do the Palestinians). Rather, the Israelis have an undeclared but official policy aimed at “Balkanizing” the Arab states. They have been encouraging “sectarian and ethnic discord” in order to destabilize their neighbors. In other words, Israeli support of the Kurds is an effort to weaken primarily Iraq, and secondarily, Syria and Iran (Turkey is just “collateral damage” in this process).

One can hardly blame the Kurds for taking help where they can get it – in this case from Israel – in a fight for independence that has been going on for centuries. Nonetheless, one can also understand that Israeli meddling seriously frightens the other states affected.

Leaving aside the Israeli issue for a moment, the question that should guide policy here is: can Iraq be reestablished as a viable state? Putting the question more informally, in 2003 a rather stupid American president — working under the influence of Zionists, witless neoconservatives, and Iraqi nationalists bearing false witness — knocked the Iraqi Humpty Dumpty off its precarious wall. Can it be put back together again? The answer is, well, maybe – but there seems to be only two ways to do this. One is a near-genocidal war waged by regional powers against the Kurds. Alternatively, Iraq might be resurrected if the Kurds are willing to settle for half a loaf in the form of being an autonomous part of a confederated state.

Right now the future is uncertain. One has the impression that the Turks and Iraqis (whose forces assaulted the Kurdish claimed city of Kirkuk on Oct. 16) are quite willing to try to solve the matter by prolonged war. This would be a big mistake. It would lead to an Iraq that may be technically united but in truth would be even weaker than it is now, and not really independent at all.

Its northern region would probably be under the de facto control of Turkey and Iran, and the rest of the country would continue to be in a decentralized mess experiencing an ongoing sectarian civil war. On the other hand, a peaceful resolution of the Kurdish issue could lead to the stabilization of the rest of Iraq as a confederated state. Also, as part of a confederated Iraq, Kurdistan’s autonomy can preclude an independent foreign policy, thus minimizing Israeli influence.

Despite the recent Kurdish vote for independence, their leaders must know this can only be made real if they can win a prolonged war against Turkey, Iran and Iraq. Israel is not in a geographical position to effectively help them do this. And so, the Kurds probably cannot endure such a struggle. That leaves them with only one rational choice.

The Kurds are now closer to independent status than at any time since the near-miss days of World War I. Their best strategy is to make the best (if not the most) of that status within a confederated Iraq and end their interaction with Israel. This has to be better than a near-genocidal war in which they would be the victims. However – and this is the usual question in such situations – will the emotions roiling on all sides allow sanity to prevail?

← Busting Upward the Military Budget
Why the Vengeance Toward Sgt. Bergdahl →

39 comments for “The Thwarted Dreams of Kurdistan”