Iraqi military forces have seized strategic positions around the oil-rich city of Kirkuk as a showdown over Kurdish calls for independence enters a dangerous new phase, writes Joe Lauria.

Overreaction in Baghdad, Ankara and Tehran to what in essence was a symbolic vote for independence by Iraqi Kurds last month has brought the Iraqi government to the brink of full-scale war with Kurdish authorities over the disputed, oil-rich city of Kirkuk.

Map of Iraq. Kurdish territory is in the northeast.

According to the latest reports, the Iraqi army on Sunday night launched a military operation to take back the city and its environs. So far it has seized a military base occupied by Kurdish forces as well as Kirkuk airport.

The Iraqi army had built up its forces outside the oil-producing city over the past several days while the Kurdish peshmerga militia re-enforced the town with 6,000 fighters. According to peshmerga intelligence, the Iranian army, the Iranian Revolutionary Guards, and Shi’ite militias joined Iraq’s military build-up.

Some peshmerga units fled from advancing Iraqi forces on Monday, while others have stood their ground and engaged in clashes. The long dispute between Baghdad and the Kurds over control of Kirkuk may well come to a head if the Iraqi army enters the city, where fighting could be intense.

All this came about because of a referendum for independence held on Sept. 25, in which 93 percent of Kurds voted to leave Iraq. However, Kurdish leaders repeatedly made clear they would not declare independence, despite their overwhelming mandate. Instead they want a one- to two-year negotiation with Baghdad to achieve sovereignty.

That has been flatly rejected by the central government, which asserted that there would be no negotiations for independence. Regionally, the Kurds also are isolated. Only one country openly supported the referendum and said it would recognize Kurdish independence – Israel.

Iraqi Kurds have enjoyed quasi-independence since the 2003 U.S. invasion. It has its own flag, army, and government ministries, and issues its own visas to foreign visitors. It has a robust oil industry, selling petroleum illegally through Turkey. Massive corruption and mismanagement however has not allowed the Kurds to build a modern state. It has no railroad, only one stretch of a highway inside the Kurdish capital city Erbil; government workers go months without pay; and the regional government cannot provide electricity without frequent power cuts throughout the day.

Despite a legitimate argument to be a sovereign state, the idea of independence in the current political climate was a fantasy. 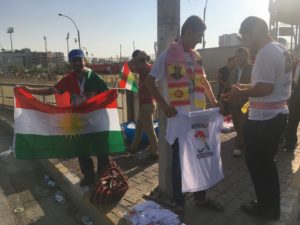 Except for the Kurds, it was a meaningless referendum. The vote was also a political move to build support for the ruling Kurdish Democratic Party in presidential and parliamentary elections in two weeks, on Nov. 1. Otherwise, this referendum was not unlike a 2005 independence vote, which also garnered more than 90 percent in favor, but which also went nowhere.

The Kurdish vote has made negotiations with Baghdad over oil, Kirkuk and other disputed territories virtually impossible, as the central government demanded Erbil first cancel the referendum’s results. A planned 2007 referendum for the people of Kirkuk to decide whether they wanted to belong to Baghdad or Erbil was never held. Instead the fate of the city appears set to be decided by force of arms.

Given the tense, but stable situation, last month’s referendum could have been simply ignored by its opponents. It would have died of its own accord. Instead the governments of Iraq, Turkey and Iran have severely overreacted, giving it more legitimacy than it had on its own.

Turkey and Iran feared the vote could stir up their own restive Kurdish populations who already have been agitating for years. Turkey has fought a 30-year insurgency against its Kurds, and Iran periodically puts down uprisings. Turkish and Iranian Kurds did not need an Iraqi Kurdish referendum to continue pursuing their separatist aims.

For Iraqi Prime Minister Haider al-Abadi, however, the overly strong reaction to the vote bolsters his domestic political support ahead of parliamentary elections next April. It is a reckless electioneering strategy risking bloodshed.

The Iraqi military has been conducting joint exercises with Turkish and Iranian troops just kilometers from the Kurdish borders with those countries. Baghdad gave Erbil a 2 a.m. Sunday deadline to cancel the referendum and pull the peshmerga out of Kirkuk.

According to a local media report, Baghdad’s other demands were to turn over Kirkuk airport; return an Iraqi military base; give back all oil fields; hand over ISIS prisoners held by the peshmerga; permit the Iraqi army to return to positions it vacated when ISIS attacked the city in 2014, which allowed the peshmerga to take control of the city; and remove the Kurdish governor of Kirkuk governorate, who was fired by the Iraqi parliament but who has refused to step down. The Iraqi army now has enforced the first three demands.

Like the rest of the world, the U.S. opposed the referendum and urged negotiations. On Friday, Secretary of Defense James Mattis said: “We can’t turn on each other right now. We don’t want this to go to a shooting situation. These are issues that are longstanding in some cases … We’re going to have to recalibrate and move these back to a way (in which) we solve them politically and work them out with compromised solutions.”

Yet Washington was unable to stop the Iraqi army’s advance on Kirkuk and the possibility of a new conflict breaking out in the Middle East.

Joe Lauria is a veteran foreign-affairs journalist. He has written for the Boston Globe, the Sunday Times of London and the Wall Street Journal among other newspapers. He is the author of How I Lost By Hillary Clinton published by OR Books. He can be reached at joelauria@gmail.com and followed on Twitter at @unjoe.