Exclusive: Catalonia’s bid for independence from Spain had a curious twist, a readiness to take its place within the supranational European Union, a further challenge to traditional nation-states, observes Andrew Spannaus. 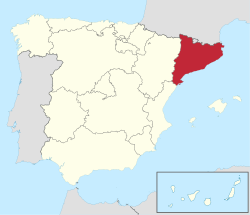 The Catalonia section of Spain.

Political debate across Europe has been shaken by the clash between the pro-independence faction in the Spanish region of Catalonia, and the national institutions of Spain, raising thorny issues about autonomy, national sovereignty and the European Union.

The Catalans, who organized a referendum on independence that was formally prohibited and partially repressed by national authorities, are in fact just one of the regional groups around the continent which have consistently sought to lessen their ties with their respective national governments, with schemes that go from greater financial independence to outright secession.

Until just a few decades ago, such aspirations would have barely been considered realistic in the Western world, as nation-states have been the dominant political entity for centuries, with no intention to give up power over their territory or population.

Several factors have intervened to change the political environment since the beginning of the 1990s. First, there has been the promotion of the notion of ethnic self-determination by Western democracies. This has generally been used to urge political change in other areas of the world, often with geopolitical aims such as weakening strategic adversaries; there are numerous examples, from the former Soviet bloc and the Balkans, to East Timor and Tibet. Support for such breakaway movements in the name of democracy and human rights has opened the door for people in Western Europe to demand their own right to self-determination.

Second, is the strategy adopted by architects of the modern European Union to encourage acceptance of the abandonment of national sovereignty. This entailed a departure from the original form of the E.U. that was begun in the 1950s as a system of economic cooperation among Western European countries with a strategic aim.

In that initial phase, it was considered essential to foster a close alliance in order to counter the Soviet Union, and the United States even made increased European cooperation a condition for disbursement of Marshall Plan funds shortly after World War II.

At the end of the Cold War though, the E.U. underwent a significant transformation, adopting the goal of gradually ceding national prerogatives to the supranational structures in Brussels and Frankfurt, ultimately seeking a sort of European-wide “United States of Europe.” This idea was promoted by the political elites, but garnered only limited public support, repeatedly being rejected when actual votes were taken among the population, for example.

It’s not difficult to understand why: countries would have to voluntarily give up their sovereignty to a political structure that, while formally managed by representatives sent from each single area, risked being led mainly by a permanent bureaucracy with little connection to, or understanding of, the diverse populations around the continent. The impression, still present today, is that the transatlantic political and financial establishment would centralize control, catering to the needs of only a small portion of the population.

A ‘Europe of Regions’

One of the solutions that emerged was to promote the notion of a “Europe of Regions,” i.e. along with the centralization of power on certain matters at the supranational level, there would also be a devolution of powers towards local authorities in other fields. The idea of emphasizing regional characteristics on an ethnic basis was not new, but it received renewed attention in the 1990s as avenues were sought to advance E.U. integration. 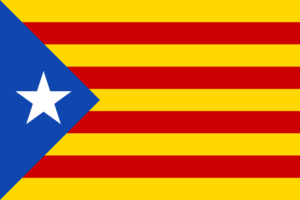 The flag of Catalonia.

This had an effect on political movements that focused on local issues. An example comes from Italy, where the idea was trumpeted by Gianfranco Miglio, an Italian jurist and political scientist who was a leading proponent of regional autonomy. Miglio was a long-time supporter of a reorganization of nations into smaller entities based on different ethnic groups, in a situation where the state and borders would ultimately disappear, as he put it.

Miglio became the philosophical leader of the Italian “Northern League” for a time in the 1990s. The League began as a movement calling for secession of the wealthier regions of northern Italy from the center and south, cast as corrupt, inefficient and impossible to reform. Representatives of the League were elected to political positions throughout the North, but eventually also took on roles in the national government.

As the notion of secession proved to be unrealistic, the political world did however embrace the idea of greater federalism, understood as allowing regional governments more financial and administrative autonomy, for better or for worse.

Now the two largest regions of Italy’s North, Lombardy and Veneto, are poised to vote in a non-binding referendum in favor of greater autonomy on Oct. 22. The aim is not to move towards actual independence – a goal embraced by only a small portion of the population – but rather to convince the national government to allow the wealthy regions to keep more of the taxes they pay, instead of sending most of the money to Rome where it is redistributed based on national priorities.

“We want the cash,” a leading member of the Lombardy Regional Government told this writer on Oct. 3. “The referendum will strengthen us in our negotiations will Rome.”

This is the position supported publicly by Lombardy Governor Roberto Maroni, who makes no bones about his desire to shift resources to his own constituents rather than keep subsidizing other areas of Italy that are less efficient and more needy.

In a press conference three weeks ago, Maroni also jumped at the chance to declare his support for a “Europe of the Regions.” Despite aiming to capitalize on populist sentiment, he distanced himself from the nationalist, anti-E.U. sentiment spreading around Europe, expressed by politicians such as Marine Le Pen in France. Thus the push for local autonomy dovetails nicely with the increase of supranational power structures that weaken the nation-state.

The case of Catalonia is more contentious. The Statute of Autonomy went into effect in 2006, giving the regional institutions heightened power over numerous areas, from education and health to communications and transportation. In 2010, the Constitutional Court of Spain began to roll back the effects of the Statute in various fields, provoking the opposition that ultimately led to the referendum earlier this month.

Not all Catalans are for leaving Spain. Indeed recent polling suggests that there is currently not a pro-independence majority. This conclusion is disputed though, and in the regional elections of 2015 pro-independence parties received 48 percent of the vote, short of an absolute majority, but a plurality sufficient to give them control of the regional government. The result has been a clash between Catalonia and the national government of Spain, with the national police intervening physically to block the referendum on Oct. 1.

The conflict has also raised serious issues for the European Union. Catalan secessionists openly stated that as an independent state they intended to be a member of the E.U. What better way to advance the notion of a “Europe of Regions”?

When push came to shove though, the E.U. institutions found themselves forced to warn Catalonia that it would not receive any preferential treatment even if it were to become independent. After an initial embarrassed silence, the European Commission aligned itself squarely with the position of the Spanish government, showing that in times of crisis the prerogatives of nation-states still prevail.

It’s ironic that just as voters throughout the West are supporting populists calling for a return to national sovereignty, in opposition to the end of political and economic borders as preached by globalization, the other flank used to weaken nation-states, that of regional autonomy and self-determination, is now causing problems precisely for those who promoted it.

12 comments for “Catalonia and the ‘Europe of Regions’”