Exclusive: Like U.S. presidents before him, Donald Trump blustered about North Korea, but the seemingly isolated nation has somehow survived and may now be coming out on top, as Daniel Lazare explains.

Don’t look now, but North Korea has just won its latest diplomatic tussle with the United States. No matter how often Donald Trump promises to rain down “fire and fury” on the Democratic People’s Republic “the likes of which the world has never seen before,” it’s increasing clear that Kim Jong Un’s nuclear-deterrence policy is working and that there’s little the U.S. can do in response.

This was evident the moment the U.N. Security Council voted on Monday to slap the DPRK with yet another round of economic sanctions, its ninth in 11 years. The Security Council resolution certainly sounded tough enough as it accused Kim of “destabilize[ing] the region” by exploding an underground thermonuclear device on Sept. 3 and posing “a clear threat to international peace and security.”

But thanks to Russia and China, it ended up with so many loopholes as to be well-nigh meaningless. The resolution imposes trade restrictions, for example, but rejects a U.S. bid to allow outside powers to enforce them by stopping and inspecting North Korean ships on the high seas or by forcing down aircraft suspected of carrying contraband. Where the U.S. had pushed for a total energy embargo, it allows oil imports to continue at current levels. It permits North Korean workers in foreign countries to continue sending hard currency back home, a practice the United States had hoped to stop. And it rebuffs U.S. demands for a ban on the North Korean national airline, Air Koryo.

Considering how adept China, Russia, and others have gotten at evading previous sanctions, it’s hard to believe they’ll have much trouble dealing with the latest round. As permanent Security Council members, Russia and China have veto power over enforcement, moreover, so it’s highly unlikely that they’ll allow it to do anything to stop them from carrying on precisely as they please.

They’ll enforce sanctions when they feel like it and look the other way when they don’t. Trump admitted as much on Tuesday when he told reporters: “We think it’s just another very small step, not a big deal. I don’t know if it has any impact, but certainly it was nice to get a fifteen-to-nothing vote, but those sanctions are nothing compared to what ultimately will have to happen.”

In other words, it’s a face-saving gesture with little real substance. As a candidate, Trump swore to make the Chinese do something about “this madman” in Pyongyang, telling the TV news show “Fox & Friends”: “They’re draining our country, and they’re toying with us with North Korea. China should do it.”

This last item is the game-changer that “regime change” advocates are afraid to face. For years, the U.S. told the world that North Korea was an economic basket case that was killing itself off thanks to its outdated socialist policies. As the neoliberals at Vox put it:

“Pyongyang is one of the world’s poorest countries. Its GDP per capita is estimated at about $1,000, about 1/28th of South Korea’s. It faces chronic shortages of food and medical supplies, depending on Chinese aid to meet its citizens’ basic needs. There’s a real risk that the Kim regime collapses under the weight of its own mismanagement.”

If the North was dangerous, it’s because its predicament was so extreme that it might do something rash out of sheer desperation. Rhetoric like this was not so easy to dismiss in the 1990s when North Korea was reeling under the impact of the post-Soviet collapse and its economy was declining by nearly half.

But then a funny thing happened on the way to that inevitable demise. Not only didn’t it happen, but the DPRK has since bounced back with remarkable vigor. Pyongyang, for example, has seen a building boom over the last 10 years that has rendered it “unrecognizable” according to Henri Féron, a North Korea export at Columbia Law School.

When a project consisting of 18 towers standing up to 48 stories tall opened up in the heart of the city in 2012, observers dismissed it as a one-time occurrence. But Kim has inaugurated a grand new apartment complex nearly every year since, not to mention an impressive new theater, a 37-acre water park, a new airport, and even an atom-shaped science center. Streets are crowded with traffic while young people zip along on inline skates.

Says Rüdiger Frank, a German specialist: “Restaurants and shops are everywhere, people are better dressed, more self-confident than two decades ago, and obviously also better fed, at least in the capital. Air conditioners are mounted on the walls of many residential buildings and offices. Everyone seems to have a mobile phone, and there are even tablet computers. In the countryside, too, signs of improving living standards are visible, including solar panels, TV antennas, cars in front of farmer’s houses, shops, restaurants, and so forth.”

To the extent sanctions had any impact at all, they may actually have backfired by encouraging the DPRK to diversify its economy much as they did in Iran prior to the 2015 nuclear accord. Mitsuhiro Mimura, a Japanese expert who has visited the North 45 times since 1996, calls the DPRK “the poorest advanced economy in the world,” meaning that while output is low for the moment, technological knowhow is high. 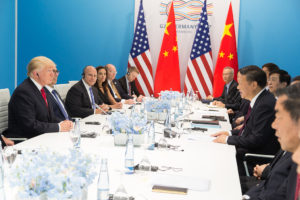 This allows the country to marshal its resources so as to produce a wide range of capital goods such as “railroad locomotives and carriages, cargo vessels, turbines and generators for power plants, [and] numerically controlled lathes.” On the military front, it turns out everything “from small arms to ballistic missiles and nuclear weapons, trucks, jeeps, destroyers, and diesel engines.”

This is a productive little economy that the DPRK’s neighbors want to get a piece of. A recent U.N. report thus found that nearby countries “wittingly and unwittingly” provide North Korean front companies with banking services and look the other way when local vessels fly the DPRK flag in order to evade import restrictions.

Andrea Berger, an expert at the Royal United Services Institute, a London think tank, described the restrictions as “in many respects a house without foundations,” adding that “not a single component of the U.N. sanctions regime against North Korea currently enjoys robust international implementation.”

Commerce is so brisk, in fact, that Russia recently inaugurated weekly ferry service between Vladivostok and the North Korean port of Rajin, a hundred miles or so to the southwest.

But if nobody wants sanctions, why do they bother at all? Why not stop pretending and allow the DPRK to trade as much as it wishes?

The reason is that the current standoff is not without certain benefits. For Kim, nukes are not only a guarantee against U.S. invasion, but a means of driving a wedge between Washington and Seoul – a goal that Trump has made all the easier by repeatedly attacking the 2007 Korea-U.S. Free Trade Agreement and by reportedly telling Republican Sen. Lindsey Graham: “If there’s going to be a war to stop them, it will be over there. If thousands die, they’re going to die over there, they’re not going to die here.”

If Korean lives really count for less in Trump’s view, then people on both sides of the 38th Parallel may have more in common than they previously believed and the North may be one step closer to its long-term goal of driving the U.S. off the peninsula. Meanwhile, Russia and China are willing to provide the DPRK with a measure of cover for two reasons: because neither wants a failed state, which is precisely what a U.S.-imposed oil embargo is designed to achieve, and because neither wants a South Korean takeover since it would mean U.S. troops right on their doorstep.

China sent more than a million troops across the Yalu River in 1950 to prevent any such eventuality while Russia, which shares an 11-mile border with the DPRK, has enough problems with NATO forces massing on its western frontiers without having to worry about U.S.-South Korean troops doing the same in the east.

Neither country is particularly happy with North Korean off-the-wall rhetoric about beating the U.S. “to death like a rabid dog” or nuking the Japanese archipelago “into the sea.” But they’re willing to put up with the rambunctious Kim if it means holding off an even more rambunctious Trump.