The startling landfall of two giant hurricanes – feasting on especially warm water off Texas and Florida – crashes into the climate change denialism that has been politically popular on the Right, notes ex-CIA analyst Paul R. Pillar.

The loss of respect for truth is one of the most consequential features of public affairs in American today. The roots and causes of this tragic development are multiple. The spread of social media and the related ability to spread untruths cheaply at the speed of electrons are parts of the story. Another part is the phenomenon of fake news (real fake news, that is, not alleged fake news that is really real news that the alleger doesn’t welcome). 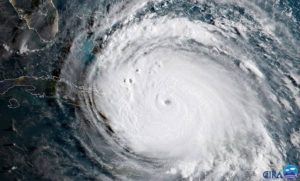 Hurricane Irma as seen from space as it approaches Florida. (NASA photo)

The advent of Donald Trump’s presidency has taken this sad story to new depths. The President lies copiously, flagrantly, unashamedly, and far beyond what had been the norm for political fibbing. He has shown how a political career, rising even to the highest office of the land, can be built on lying.

Correctives to this awful trend are difficult to identify. The tribal belief system that prevails in most of the American population, in which people chiefly listen to and believe sources they identify with politically or socially and had already been telling them what they want to hear, is so well entrenched it seems almost impossible to overcome. Many people reject factual corrections as a form of bias and unfair treatment by sources (such as the “left-wing media”) with which they do not identify politically or socially.

The epistemological rut in which the nation currently is mired is captured by a cartoon in which a man wearing a Trump shirt comments on how the President has lied about jobs, health care, and other topics. When asked by the person on the next barstool why he nonetheless supports Trump, the man replies, “cuz he tells it like it is.”

Combating lies with counter-lies would not be wise. However much it might help to arrive at any one decision or policy that is better than the alternative, the larger effect would be to prolong and deepen the damaging disrespect for truth. One can shape arguments, however, in ways that, while still truthful, are better able to get through to lie-besotted masses than the most thoughtful and disinterested analysis would.

In that regard, the United States getting hit with two major hurricanes in rapid succession provides a teaching opportunity regarding the critical issue of climate change. Thoughtful leaders such as former President Barack Obama habitually issue the standard disclaimer that no one weather event can be attributed to manmade climate change. This sort of caution, while intellectually admirable, represents excessive reticence when considering what it takes to get through skulls and through information filters in the post-truth epoch.

Christine Todd Whitman, a Republican who ran the Environmental Protection Agency under George W. Bush, notes not only that the basic physical links involving global warming, greenhouse gases, and burning of fossil fuels are “as certain as the link between smoking and cancer.” She further observes that ”a broad consensus of scientists also warn of the influence of the warming climate on extreme weather events.” 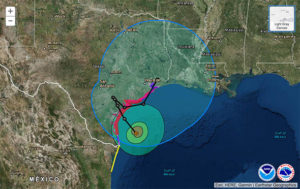 The overall connections, in other words, in terms of cause, effect, and degree of risk are unquestionable, even if no one case of lung cancer can be blamed on any one pack of cigarettes.

Focusing on the most recent tropical cyclones would not necessarily be the way a completely objective analysis in some other epoch would shape a disquisition on climate change. And focusing on Harvey and Irma would partly play to the otherwise unfortunate tendency to treat one data point as an event but two data points as a trend.

Politically, however, seizing such a teaching opportunity, in which there is an immediate physical impact even on many people who get their news from Rush Limbaugh, is a necessary while still truthful way to battle untruths.

Such a moment also places in especially stark relief the dishonesty, and related hypocrisy, of leading climate change skeptics. These include Texas Sen. Ted Cruz and other legislators on the right from his part of the country, who voted against relief for victims of Hurricane Sandy but now look to the federal government for help to victims of Hurricane Harvey, while trying to rationalize their inconsistency with the lie that most of the Sandy relief was not related to damage from the storm.

They include Florida Governor Rick Scott, who has used the standard cop-out of “I am not a scientist” to explain his failure to acknowledge manmade climate change, and whose lackadaisical policies in preparing for effects of climate change will mean additional suffering by the citizens of his state from the storm that is hitting them now. They include President Trump, whose EPA has put a former campaign aide with no scientific expertise to work in eliminating grants with the “double-C” term to ensure that climate change does not get studied with agency funds.

Without diminishing any immediate sympathy and support for those whose lives the hurricanes have upended, this is the time to shout from rooftops that dishonest climate-change-denying politicians are causing more such suffering in the future for Americans as well as others. And when Trump’s EPA destroyer (a.k.a. administrator) Scott Pruitt says that now is not the time to talk about climate change, the proper response is that now is an excellent time to talk about it.

← The Dangerous Decline of U.S. Hegemony
Echoes of Iraq-WMD Fraud in Syria →