Exclusive: President Trump’s erratic behavior and careless bellicosity could have dire consequences for the world, but he also demonstrates the need to rethink America’s global power, notes David Marks.

There is clear evidence of a world increasingly steeped in conflict and violence: The degradation of U.S.-Russian relations, territorial tensions in the South China Sea, the hostile rhetoric between North Korea and the United States, an escalation of the border conflict between China and India, growing tension between Israel and Iran, and the continuing wars in Afghanistan, Iraq, Syria, Yemen and Ukraine; among other hostilities around the globe yielding death and destruction. 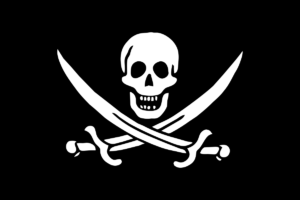 A pirate flag from the early Eighteenth Century.

Yet there is some indication that what we may be witnessing is darkness before a new dawn.

In his historical essay of 1968, Operating Manual for Spaceship Earth, Buckminster Fuller, futurist and inventor of the geodesic dome, describes the conquest and colonization of the planet by Europeans as the age of the great pirates. He marks the end of that era with World War I, followed with a subsequent attempt by lesser pirates taking advantage of a time when the planet’s fate was precarious.

Fuller concluded that the later events of the Twentieth Century and beyond would be determined by the wisdom and strength of those who recognized that Spaceship Earth has limited resources that need to be appreciated and protected. As with others who consider our predicament, he saw only two possibilities:

“We are not going to be able to operate our Spaceship Earth successfully nor for much longer unless we see it as a whole spaceship and our fate as common. It has to be everybody or nobody.”

The reign of the last of the pirates in their final self-destructive, single-minded grasp for profits would either destroy human life as we know it or be countered with a new sustainable relationship with the Earth.

The struggle between the conflict generating profiteers and those who recognize that reducing conflict is the only path to sustaining human life on the planet, is coming to a head. Despite hard evidence that environmental traumas are increasing and will dominate the near future, the modern pirates are in defiant denial, leading their final charge against anything that might get in the way of gargantuan treasure chests. They must lie, cheat, pillage or kill in order to maintain the facade that everything is okay with the planet.

One of the most critical tools of the great pirates and their modern heirs is the ability to prey on the ignorant and misinformed.

The pirates of old applied the sword to abscond with valuables; and more often committed genocide to steal land and resources from the indigenous.

Modern pirates inherited these tools and became specialists in others. They deceive, entice and encourage scapegoating to obtain treasures or protect their fortunes. Ignorance is fertile ground for their work. Anyone opposing these marauders and their skewed vision of the world become the objects of derision, ridicule and threats of violence.

Yes, this tale may sound familiar as we watch world events unfold. In that sense, the Trump presidency is a dramatic test of the planet’s fate; the last desperate, inane, final gasps of piracy confront us all.

Some recent U.S. Presidents, other world leaders, corporations and industrialists bear some resemblance to the pirates of old, and certainly there are current conflicts that are fueled outside the scope of U.S. influence. But Trump is straight out of Central Casting. And in contrast to his self-aggrandizement, he is not the heroic leader, but rather the mad, despised black pirate awash in his own darkness and loathing.

The glimmer of light comes because President Trump, pirate extraordinaire, is unwittingly doing everything to ensure that no one will ever tolerate a pirate again.

Because he is great at alienating others, Trump’s enemies begin to unite. Some of his previous supporters and loyalists have mutinied in reaction to his unwillingness to condemn racism and his willingness to pardon political allies. Secretary of State Rex Tillerson recently spoke an amazing phrase to encapsulate and isolate the so-called leader of the free world: “The President speaks for himself.”

The greatest danger, which was noted by some before he was elected and is just being recognized by those who have been on board his ship until now, is Trump’s proclivity to embrace violence, however and wherever it might suit him, such as his rush-to-judgment missile strike against a Syrian airbase in April. Many an eyebrow was raised at Trump’s “fire and fury like the world has never seen” threat against North Korea – suggesting a nuclear strike – but very few have broached the touchy subject of taking away his role as commander in chief, including his nuclear sword, via impeachment or the Twenty-fifth Amendment’s provision for declaring the President “unable to discharge the powers and duties of his office” (requiring a finding by the Vice President and a majority of the Cabinet).

A Pattern of Violence

Veiled hope percolates that Trump’s words are no more than bluster – and it must be acknowledged that Trump’s predecessors resorted to violence repeatedly around the world, including Nobel Peace laureate Barack Obama, who acknowledged bombing seven countries, and George W. Bush, who invaded Afghanistan and Iraq and lusted for more wars, and that Trump’s rival last year, former Secretary of State Hillary Clinton, may have surpassed even Trump in her hawkishness, having pushed for the invasion of Libya in 2011 and supporting the bloody proxy war in Syria.

But the current mad pirate, if nothing else, excels at unpredictability. The world watches in amazement as a buccaneer steers the most powerful ship on the planet with egoistic lunacy. How might this precarious tale have a happy end?

If we manage to survive these dangers, the Trump presidency could engender a new era of consensus. Perhaps with the maddest of the pirates gone, recognition of the causes of his ascendency might be considered. First and foremost: the last U.S. presidential election presented only a choice between an unsustainable status quo and a role of the dice.

In that sense, it is not enough for Trump simply to be replaced by another pirate, even one with a calmer disposition and a better vocabulary. For the U.S., a period of serious self-criticism is warranted. Without that, it is hard to envision how candidates seeking a more peaceful future can succeed.

President Trump’s crass destructiveness – and the more suave advocacy of violence by Bush, Obama and Clinton – should be a mirror for all Americans to reflect upon. The image of Trump is more garish and thus more obvious in its ugliness, but that may finally shake Americans of all ideological persuasions awake in the recognition of the viciousness that has absorbed American politics and society.

Trump’s unintended contribution is that he makes obvious how dangerous it is for the planet to have mad pirates at the helm. He has given re-birth to a concept that Fuller succinctly expressed: “If humanity does not opt for integrity we are through completely. It is absolutely touch and go. Each one of us could make the difference.”

Perhaps – once Americans are awake to this reality – simple things might be prioritized; like reducing violence between nations and religions, reversing the abuses that have bruised the planet and polluted its atmosphere. And maybe working to ensure that everyone on Spaceship Earth is fed, sheltered and educated.

Unlikely, naive and idealistic you say? Perhaps, but the moral health of the United States is a strong influence on the rest of the world. The direction that the U.S. takes after Trump will be a key factor in future global stability, both politically and environmentally.

The veil hasn’t quite lifted and the pirates still dominate, but there’s potential for recognizing we’re all on a mother ship worth protecting.

73 comments for “The Last of the Mad Pirates?”