President Trump appears lost in the swamp of his own shallow mind, pulling down the “adults” around him more than they can lift him up, as ex-CIA analyst Paul R. Pillar explains.

Optimism has repeatedly been expressed, especially after any qualified and respected person has been appointed to a senior position in the current administration, that the “adults in the room” will check the excesses and compensate for the deficiencies of a blatantly unqualified president. 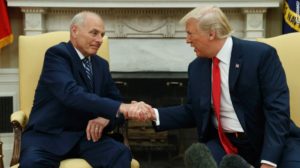 Hope placed on the four-star shoulders of John Kelly as he assumed duties of White House chief of staff is a recent example. Such optimism has proven to be largely unfounded.

Repeatedly the excesses of Donald Trump have escaped any attempt to check them. Trump’s fire-and-brimstone threats against North Korea, which surprised his foreign policy advisers, are the latest example. Trump’s emulation of Kim Jong-un’s scary rhetoric played into the hands of Kim’s regime, whose propaganda emphasizes threats from the United States, and escalated tensions to the point of shaking global stock markets. The rhetoric was the sort of thing Trump turns to when he evidently does not have any better ideas for addressing a problem.

Even when the adults do seem to have had some restraining influence on their boss, the effect is likely to be limited and temporary. Last month Trump’s advisers got him grudgingly to recognize reality and to certify that Iran is complying with the agreement that restricts its nuclear program. But since then, Trump has repeatedly asserted that Iran is not in compliance.

In other words, Trump is disseminating another of his lies. We know it is a lie because with the highly intrusive monitoring provisions of the agreement, international inspectors get to see first-hand whether Iran is complying.

Clean-up by his subordinates after Trump’s rhetorical excesses has become a common pattern. This past week we had the remarkable case of the U.S. Secretary of State seeing it necessary to urge his fellow citizens to get a good night’s sleep despite the inflammatory rhetoric of their own President about North Korea.

But clean-up duty can only accomplish so much. Where the damage extends beyond rhetoric to actions, such as withdrawal from the global climate change agreement, it cannot do much of anything.

The reasons the adults do not have any greater influence in preventing or limiting the damage Trump inflicts are centered primarily on the qualities of Donald Trump himself. An insecure narcissist who has used demagoguery to get where he is today is not a good subject for guidance and restraint by subordinates. Trump’s lack of self-control, and resistance to anything that looks like control by others, manifests itself especially in how much his presidency is defined by after-hours tweets.

The absolute refusal to admit in public that he is ever wrong is probably mirrored in how Trump interacts with advisers in private. His narrow and self-referential notion of loyalty, which is hard to distinguish from sycophancy, implies an unwillingness to listen to contrary opinions from subordinates and an inclination to remove subordinates who persist in offering such opinions.

Some additional explanations for the adults’ failure to rein in Trump pertain not just to characteristics of the President but to the thinking of the adults themselves. Awareness of how insecure is the job of any senior official in this administration who dares to differ with the President can lead to punches being pulled. This is not necessarily a selfish and cowardly clinging to a job. With such officials being aware of how much additional damage might be done by this President, it can be unselfish and patriotic to put up with the stresses and compromises necessary to work for him, in the interest of trying to inject prudence into this administration from the inside.

This may be the thinking of the national security adviser, H.R. McMaster, who has had a previously stellar reputation soiled by episodes of sycophancy. This process began soon after McMaster took the job, when he was trotted out to the White House driveway to try to justify to reporters Trump’s disclosure of third-party classified information to the Russian ambassador and foreign minister.

Retired Army officer John Nagl, who knows McMaster well, sees what McMaster is doing in such terms. Nagl said, “The administration is clearly in free fall, and McMaster is exactly the man the nation needs to have … to hold all the pieces together.” Nagl added that “his friends and I believe” that it is worth McMaster giving up some of his “well-earned reputation for integrity.”

Such reasoning is valid, and even high-level resignations are not apt to have as much impact on policy as is often alleged by observers criticizing such officials for not resigning. But in the meantime other damage is done. Tenuously situated subordinates have to pick their battles, and on the subjects on which they do not choose to fight, much bad policy and nonsense can ensue.

Maintaining standing and influence with the President can lead to subordinates publicly voicing notions that make adoption of bad policy all the more likely. Secretary of State Rex Tillerson, although he reportedly was one of those who urged Trump in July to certify Iran’s compliance with the nuclear agreement, has been saying publicly some of the very falsehoods that Trump would use in trashing the agreement.

Sometimes some of the adults, although useful restraints on the President on most matters, share his predilections and prejudices on others. This is true of Secretary of Defense James Mattis, particularly on anything having to do with Iran, against which he is waging almost a personal vendetta.

On some issues, adults may not see things the same way as Trump but there is a sort of malevolent convergence in which the President and his advisers go along with the same unproductive policy for different reasons.

This may be true of policy toward Afghanistan. Trump, who once averred that the United States “should have kept the oil” from Iraq, is now interested in getting U.S. hands on Afghanistan’s mineral resources. It is unlikely that most of the adults share that kind of crude mercantilist view, and they probably see the major downside of the United States presenting its overseas military operations as intended to grab other people’s mineral wealth. But the same adults, including Mattis and McMaster, favor continuation of the U.S. military expedition in Afghanistan to achieve something that can be called “victory” and to pursue the obsolete notion that Afghanistan is a unique key in determining terrorist threats in the West. Thus America’s longest war continues, with Trump craving minerals and his generals wanting to continue the effort for other reasons.

Trump, in imitating Kim Jong-un’s incendiary rhetoric, is still a long way from duplicating the ruthless North Korean dictatorship, in which even family members get executed when they fall out of favor. But there is some further resemblance in the difficulty in speaking truth to power, and in the likelihood that such speaking will make a difference. Even if surrounded by able hands, much policy will still reflect the whims and weaknesses of the man at the top.

← How Obama, Trump Had Their Wings Clipped
Trump’s Soft-Shoe on Racist Violence →

68 comments for “The Thankless Task of ‘Saving’ Trump”