Exclusive: By pushing the Russia-gate “scandal” and neutering President Trump’s ability to conduct diplomacy, Democrats and Congress have encouraged his war-making side on North Korea, writes Robert Parry.

There was always a logical flaw in pushing Russia-gate as an excuse for Hillary Clinton’s defeat – besides the fact that it was based on a dubious “assessment” by a small team of “hand-picked” U.S. intelligence analysts. The flaw was that it poked the thin-skinned Donald Trump over one of his few inclinations toward diplomacy.

We’re now seeing the results play out in a very dangerous way in Trump’s bluster about North Korea, which was included in an aggressive economic sanctions bill – along with Russia and Iran – that Congress passed nearly unanimously, without a single Democratic no vote.

Democrats and Official Washington’s dominant neocons celebrated the bill as a vote of no-confidence in Trump’s presidency but it only constrained him in possible peacemaking, not war-making.

The legislation, which Trump signed under protest, escalated tensions with those three countries while limiting Trump’s power over lifting sanctions. After signing the bill into law, Trump denounced the bill as “seriously flawed – particularly because it encroaches on the executive branch’s authority to negotiate.”

As his “signing statements” made clear, Trump felt belittled by the congressional action. His response has been to ratchet up bellicose rhetoric about North Korea, bluster appearing to be his natural default position when under pressure.

Remember, in April, as the Russia-gate hysteria mounted, Trump changed the subject, briefly, by rushing to judgment on an alleged chemical-weapons incident in Khan Sheikhoun, Syria, and firing off 59 Tomahawk missiles at a Syrian military base.

He immediately won acclaim from Official Washington, although Hillary Clinton and other hawks argued that he should have gone further with a much larger U.S. invasion of Syria, i.e., establishing a “no-fly zone” even if that risked nuclear war with Russia.

What Trump learned from that experience is that even when he is going off half-cocked, he is rewarded for taking the military option. (More careful analysis of the Khan Sheikhoun evidence later raised serious doubts that the Syrian military was responsible.)

So, we now have President Trump in a bizarre exchange of schoolyard taunts with the leadership of North Korea, with Trump’s “fire and fury like the world has never seen” rhetoric possibly plunging the United States into a confrontation that could have devastating consequences for the Korean peninsula, Japan and indeed the whole world. 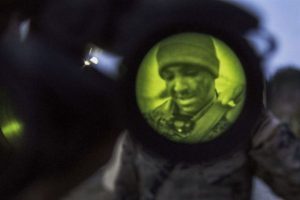 Given the fact that the world has already seen the U.S. nuclear destruction of two Japanese cities at the end of World War II, Trump’s loose phrasing seems to suggest that the United States is prepared to use nuclear weapons against North Korea (although he may be referring to “just” carpet-bombing with conventional ordnance).

If nuclear weapons are brought into play, it is hard to fathom what the long-term consequences might be. It’s unlikely that Trump – not known for his deep thinking – has even contemplated that future.

However, even a “limited” war with conventional weapons and confined to the Korean peninsula could kill hundreds of thousands of people and severely shake the world’s economy. If North Korea manages to deliver retaliatory damage on Japan, a human catastrophe and a financial panic could follow.

Many thoughtful people are now expressing alarm at Trump’s erratic behavior, but many of those same people cheered the promotion of Russia-gate as a way to corner Trump politically. They didn’t seem to care that the “scandal” was built on a foundation of flimsy or phony evidence and that a key argument – that “all 17 U.S. intelligence agencies” concurred in the Russian-hacking conclusion – was false.

Once that fake “consensus” claim disappeared – after President Obama’s intelligence chiefs acknowledged that the Jan. 6 “assessment” was the work of “hand-picked” analysts from only three agencies – there should have been a stepping back from the Russia-gate groupthink. There should have been demands for a reassessment of the underlying assumptions.

However, by then, too many Important People, including editors and executives at major news organizations, had accepted Russia’s guilt as flat fact, meaning that their reputations were at risk. To protect their estimable careers, all doubts about Russia’s guilt had to be crushed and the conventional wisdom enforced.

That self-serving defensiveness became the backdrop to the Russia-Iran-North Korean sanctions bill. Not only could no rethinking be allowed on Russia-gate but Trump’s resistance to the groupthink had to be broken by neutering him along with his presidential powers to conduct diplomacy.

Still eager to please the Democratic #Resistance which sees Russia-gate as the pathway to Trump’s impeachment, Democrats – from neocons like Sen. Ben Cardin to anti-interventionists such as Rep. Tulsi Gabbard – joined in the stampede for the sanctions bill.

In their rush, the Democrats even endangered Obama’s signature diplomatic accomplishment, the international agreement blocking an Iranian nuclear weapon. Obama had promised Iran sanctions relief, not more sanctions. Now, the prospects for the accord’s collapse are increased and the neocon dream to bomb-bomb-bomb Iran revived.

And, by tossing North Korea into the mix, the Democrats left Trump few options other than to unleash his warmongering side and plunge the world toward a potential cataclysm.

So, this is what the Russia-gate opportunism has wrought. The logical flaw in Russia-gate may turn out to be a fatal one.