The Trump administration is sending mixed signals about what it might do in North Korea, from suggestions of a first-strike military attack to talks aimed at reining in North Korea’s nuclear and missile programs, reports Dennis J Bernstein.

On Aug. 1, Secretary of State Rex Tillerson said the U.S. is not pushing for regime change in North Korea, but some White House insiders say President Trump is considering going to war. Meanwhile, North Korea claims to have made progress on delivering a potential nuclear strike on the West Coast and beyond.

A map of the Korean Peninsula showing the 38th Parallel where the DMZ was established in 1953. (Wikipedia)

Tillerson, while saying the Pentagon has updated military options, admitted that a confrontation with North Korea could be catastrophic and suggested that there was still time for negotiations backed by economic pressure.

“We’re not your enemy, we’re not your threat but you’re presenting an unacceptable threat to us and we have to respond.”

I spoke to Flashpoint’s Special Correspondent for the Koreas, Kay Jay Noh, about the volatile situation that could become a full blown confrontation at any time. Noh, who was recently in China and Korea, is a longtime political activist, writer and teacher. I spoke to him in Berkeley, California, on July 31.

Dennis Bernstein: U.S. pundits and certain Trump administration officials are talking about a “first strike,” a “limited strike.” We are flying bombers over the peninsula. What is your understanding of the situation on the ground in both countries?

Kay Jay Noh: I was in Korea and China recently and the situation on the ground is very different in the two countries. In Korea, people are going about their lives as if things were perfectly normal. In China, there is an escalation to war. It is rather covert but those preparations are becoming more and more evident.

What we do know is that on July 28, the North Koreans launched a Hwasong-14 ICBM [intercontinental ballistic missile]. This missile traveled to an altitude of 3,725 kilometers and a distance of 998 kilometers. It was in the air for 47 minutes. So it is clearly an ICBM that has the range to reach the continental United States. The experts are still out on whether the reentry vehicle worked or not.

All of this raises the temperature considerably. As always, the US has stated that all options are on the table. [UN Ambassador] Nikki Haley has said that she is not going to go to the UN anymore because there is no point in doing so. The prime minister of Japan, Shinzo Abe, together with Trump, has said that they are “done talking about North Korea”–ominous last words perhaps.

Again, it is important to point out that North Korea’s missile program is a deterrent one. They do not have a first-strike policy, and they have reiterated on numerous occasions that they are willing to cease their nuclear program if the US will cease its military maneuvers against North Korea.

DB: We need another geography lesson on how close Seoul [the South Korean capital] is to the front lines. What might such a first strike look like?

KJN: A first strike might be on a nuclear facility, it might be on a launch facility, it might be a targeted attempt to take out the leadership. The thing to remember is that the North Korean border is closer to Seoul than Seoul’s main airport. The North has between 7,000 and 12,000 conventional artillery pieces pointed at Seoul and could obliterate the city in a short space of time. Estimates are that between 30,000 and 300,000 people could be killed in the first volley of artillery fire.

North Korea has been using what is referred to in the defense parlance as a “tit for tat.” Every time it perceives a threat, it responds either rhetorically or militarily. The problem with tit for tat as a conflict resolution process is that it often leads to misinterpretation and a spiral of escalation. It seems that we are getting close to a point where things are no longer predictable.

DB: Because the United States refused to sign a peace treaty in 1953 [to officially end the Korean War], we are still essentially in a state of war.

KJN: Korea was forced to open to the West in 1886 by a sort of gunship diplomacy. Since then the Korean relationship with the United States has been a very conflicted one, despite the way it is portrayed in the media. 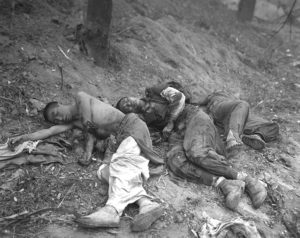 Douglas MacArthur said of the Korean War [1950-1953] that “This war will result in a slaughter such as has not been seen in the history of mankind.” This was literally the case. The North was razed to the ground, bombed into the Stone Age, napalmed into one long barbecue pit, and then intentionally flooded. By any reasonable measure, the people of North Korea have grounds now to fear for their safety.

Since that time, they have been threatened with nuclear annihilation on multiple occasions. Twice yearly the US conducts military exercises that include the decapitation and occupation of North Korea. Colin Powell threatened a couple of times to “turn North Korea into a charcoal briquette.” This is a chilling statement for a country that had 50,000 gallons of napalm dropped on it daily for three years. So despite the arguments that North Korea is totally irrational, it would be more rational to conclude that it is acting out of concern for its survival.

DB: You mentioned the war games, which happen off the coast of Korea twice a year. But there is also a serious move forward by the United States with the “Pacific Pivot.” The program was put on steroids by Obama and includes complete domination of the region by land, sea, air and space. Can you talk about some of the new weaponry that might be making the North Koreans and the Chinese a little jumpy?

KJN: China has been surrounded by some 400 military bases. There has also been economic warfare, legal warfare, information warfare, and cyber warfare. This pivot that was put in place by Hillary Clinton and Barack Obama involved the installation of THAAD [Terminal High Altitude Area Defense], which is essentially an assault system. South Korea has already installed the THAAD system, through some rather irregular maneuvers, by bypassing the parliament. It did this very rapidly, putting these facts on the ground before the new administration could take office.

The Chinese are most concerned by the radar component of the THAAD system. This radar uses waves on the level of about one inch long. This means that they have a very high resolution and they render the entire nation visible and transparent for US intelligence purposes. This is technology that hasn’t been used before and it makes China extraordinarily vulnerable to the US. They want this system removed at any cost.

There were early indications that [newly elected South Korean] President Moon was going to renegotiate the system and perhaps even push it back. But in the wake of this recent launch, he has said that he is going to put in place right away the four additional launches that have been awaiting clearance.

DB: There were recently national elections in South Korea. The new president seemed to be moving left, he seemed more willing to negotiate with the North. But now that is all sort of going by the wayside and Moon is doing the “go along to get along.”

KJN: Yes, I think that’s a pretty fair assessment. The geopolitical picture is such that he doesn’t have a lot of maneuvering room. He did go to Berlin on July 12 and put forward his North Korean doctrine, which was that there was going to be no attempt to force reunification or to force North Korea to collapse, and there would be some friendly gestures, some cultural exchange. So there was some general language of reconciliation and an apparently genuine attempt to deescalate the situation. All of that is put on the back burner now with this recent launch and the strong rhetoric coming out of Washington.

DB: What should we be careful to monitor at this point, as we move toward the brink of war?

Secretary-General António Guterres (left) addresses the Security Council ministerial-level meeting on the nuclear weapon and ballistic missile programs of the Democratic People’s Republic of Korea (DPRK). At right is Rex W. Tillerson, U.S. Secretary of State and President of the Security Council for April. Behind Tillerson is U.S. Ambassador to the UN Nikki Haley. (UN Photo/Eskinder Debebe)

KJN: It is anybody’s guess at this point because so much of the language has been contradictory. On the one hand there is the viewpoint that the North Koreans are a joke and you don’t have to give them anything. All we have to do is besiege them and they will collapse. This was the doctrine known as “strategic patience” during the Obama administration.

The UN ambassador, Nikki Haley, has said that she is not going to go to the Security Council this time because resolutions there are violated with impunity. The rhetorical stance is that Beijing must finally confront Pyongyang. But China’s interests regarding North Korea and the interests of the United States are diametrically opposed.

It is foolish to assume that the US will outsource its foreign policy to China when China has opposing interests. That is not going to happen. Furthermore, the Chinese and the Koreans have a relationship that goes back millennia. If you travel to Korea you realize that what you are seeing is Chinese culture preserved in a sediment form.

In a word, we have to watch things very carefully and hope that we don’t cross the threshold into even minimal military action. That would have cascading effects that are catastrophic.