There was a chance President Trump could have brought some positive change, especially in reeling in foreign wars, but his bizarre narcissism and flaming incompetence have overwhelmed everything else, as Michael Winship describes.

Donald Trump is not a president but he plays one on TV. And a terrible one at that.

Watching him last week during what were, arguably, the worst of many horrible days of this presidency, was to see pure, rampaging id. Aggressive, needy, without logic or reason, Trump continues to rule with ignorance and incoherence, seemingly oblivious to the havoc he causes or maybe just thoroughly enjoying it. Whether his new chief of staff John Kelly, a career Marine officer, can bring order and discipline — drop and give me 20, Trump — remains to be seen. 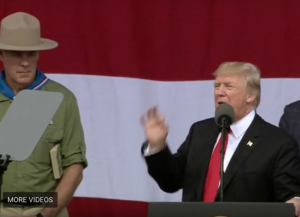 President Trump speaks to the Boy Scout Jamboree on July 24, 2017. (Screenshot from Whitehouse.gov)

“Trump now has a chance at governing, but it may be only a slim chance,” Chris Whipple, author of a book about White House chiefs of staff, said in an interview with The New York Times:

“The fundamental problem is that Donald Trump is an outsider president who has shown he has no idea how to govern — who, more than any of his predecessors, desperately needs to empower a chief of staff as first among equals to execute his agenda and tell him hard truths.

“But does anyone believe that this president wants such a person around?”

All of this is taking place at such a breakneck pace, trying to keep track feels a little bit like those guys who paint the George Washington Bridge from one end to the other and then start all over again. Speed that up multiple times without a moment’s rest and you have life in the land of Trump.

For the moment, though, let’s focus on three speeches delivered by Trump during the last week of July that epitomize the depths to which the weight belts of this White House have sunk us.

On Monday, July 24, came that wildly inappropriate address to the Boy Scouts National Jamboree in West Virginia, at which he told 24,000 young people all about fake news and his stunning electoral victory and a rich friend who sold his business and bought a yacht to pursue a life of wine, women and song.

The scouts had been instructed beforehand to be “courteous” and many of them applauded, even cheered, his remarks and booed Barack Obama and Hillary Clinton when he mentioned them. One 15-year-old scout from Indiana told The Washington Post, “There were disagreements all over camp. Some people saying ‘F Trump,’ some people saying ‘MAGA.’ I heard there was a troop from New York that had a troop from Texas right next to them and the leaders had to keep them separate.”

That many of our worthy New York lads resisted the urge to pelt our whackdoodle commander-in-chief with s’mores and trail mix may only be explained by a healthy fear of the Secret Service. The Boy Scouts’ chief executive apologized to those offended by the speech, saying, “We sincerely regret that politics were inserted into the Scouting program.” But then, in an interview with The Wall Street Journal, Trump claimed, “I got a call from the head of the Boy Scouts saying it was the greatest speech that was ever made to them, and they were very thankful.”

It will come as no shock that the Boy Scouts deny such a call ever took place. In any case, as even Fox News regular Kat Timpf said to The Post, “It’s a strange thing to use your time in front of tens of thousands of teenagers to brag about your election win and your partying days in New York.”

You remember the old joke: What’s the difference between government and the Boy Scouts? The Boy Scouts have adult leadership.

At the end of the week, on Friday, July 28, there was the president’s now-notorious speech to law enforcement officers in Long Island’s Suffolk County, where police have been fighting murder and other violence perpetrated by the brutal street gang MS-13. Trump used the occasion to deliver one of his fearmongering “American carnage”-style speeches as he described gang members as “animals” who “have transformed peaceful parks and beautiful, quiet neighborhoods into bloodstained killing fields.”

MS-13 began in California, but many if not most of its members are from Central America. It is “transnational.” Trump’s subtext was ugly and clear: Too many immigrants commit heinous crimes. (This week’s White House rollout of the RAISE Act to slash the amount of immigration to the US was the latest legislative manifestation of Trump and the right wing’s xenophobia).

Much of this anti-immigrant rhetoric was lost, however, as the focus of public and media attention shifted to remarks in the speech that all but endorsed police brutality:

“When you see these thugs being thrown into the back of a paddy wagon, you just see them thrown in, rough, I said, please don’t be too nice. Like when you guys put somebody in the car and you’re protecting their head, you know, the way you put their hand over. Like, don’t hit their head and they’ve just killed somebody. Don’t hit their head. I said, you can take the hand away, okay?”

As many responded in disbelief and revulsion, Trump’s spin team tried to brush this off as one big funny joke but even if it was meant in jest — and what snowballs have you been fighting with in hell? — his words were revolting, and resulted in pushback from police departments (including Suffolk County’s) and other professional law enforcement organizations. “The last thing we need,” the Police Executive Research Forum’s Chuck Wexler said in a radio interview, “is a green light from the president of the United States for officers to use unnecessary force.”

The third speech, on Tuesday, July 25, in Youngstown, Ohio, was the one least noticed, perhaps because there was so much other Trump news — part of the day was spent by the president dissing Attorney General Sessions and it also was just hours after the Senate voted to begin debate on their proposals to repeal Obamacare. What’s more, it wasn’t an official White House event but part of yet another campaign rally — the sixth since he became president — meant to placate and keep inflated his Macy’s balloon-sized ego. 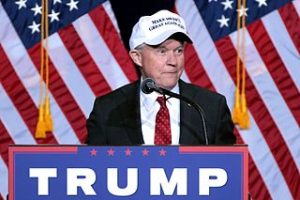 You won’t find the text on the official White House website, but it was in many ways the most cringe-inducing of the three addresses, once again hammering at the empty catchphrases that have characterized Trump’s candidacy and presidency:

“I’m back in the center of the American heartland, far away from the Washington swamp to spend time with thousands of true American patriots,” he began. “… I’m here this evening to cut through the fake news filter and to speak straight to the American people. Fake news. Fake, fake, fake news. Boy oh boy, people. Is there anyplace that’s more fun, more exciting and safer than a Trump rally?”

He painted what was in many ways an even more lurid picture of immigrant violence than he would later in the week on Long Island:

“The predators and criminal aliens who poison our communities with drugs and prey on innocent young people, these beautiful, innocent young people will find no safe haven anywhere in our country. And you’ve seen the stories about some of these animals. They don’t want to use guns, because it’s too fast and it’s not painful enough.”

He then went into more explicit detail — ” Make America Afraid Again” was the headline at Slate.com — then attacked the notion of sanctuary cities and said:

“We are dismantling and destroying the bloodthirsty criminal gangs, and well, I will just tell you in, we’re not doing it in a politically correct fashion. We’re doing it rough. Our guys are rougher than their guys.”

Read the Youngstown speech in its entirety. While awash in his standard campaign bluster, it is even more disturbing when uttered by the man who as president is supposed to set an example of leadership. Which brings us to this astonishing statement:

“Sometimes they say he doesn’t act presidential. And I say, hey look, great schools, smart guy, it’s so easy to act presidential but that’s not gonna to get it done. In fact, I said it’s much easier, by the way, to act presidential than what we’re doing here tonight, believe me. And I said with the exception of the late great Abraham Lincoln, I can be more presidential than any president that’s ever held this office. That I can tell you. It’s real easy. [Cheers] But sadly, we have to move a little faster than that.”

Wow. What’s appalling, Mr. President, is that the moves you envision diminish us as a nation, remove all traces of grace and charity, play to the basest instincts and demean the high office you hold. I am trying to move as fast as I can, too, sir. In the opposite direction from wherever you are.

Michael Winship is the Emmy Award-winning senior writer of Moyers & Company and BillMoyers.com. Follow him on Twitter: @MichaelWinship. [This article first appeared at http://billmoyers.com/story/trump-speeches-dead-nation/]