Director Oliver Stone saw his four-part interviews with Russian President Putin as a way to give Americans a better understanding of a leader who has been demonized in the mainstream media, reports Dennis J Bernstein.
By Dennis J Bernstein

Not surprisingly, the U.S. mainstream media, which has obsessed over the Russia-gate “scandal” for months, is bashing director Oliver Stone for his four-part series of interviews with Russian President Vladimir Putin on the grounds that Stone should have been tougher.

But Stone’s subtle and probing interviews of Putin — The Putin Interviews airing on Showtime — give the viewer a revealing inside look at the Russian leader, who is by all accounts extremely popular among Russians with approval ratings of around 80 percent.

I spoke with Stone at his Los Angeles offices on July 25th, soon after he was honored with the Gary Webb Freedom of the Press Award by Consortiumnews.com, hosted by award-winning investigative reporter, Robert Parry.

Stone also will receive the Honorary Heart of Sarajevo Award “for his extraordinary contribution to the art of film” at the 23rd Sarajevo Film Festival in August.

Dennis Bernstein: Oliver Stone, how important was it for you to win the Gary Webb Freedom of the Press Award? Gary Webb, for those who don’t know, was the reporter who broke the story about the CIA’s relationship to drug traffickers.

Oliver Stone: Gary Webb was a hero of mine, as is Bob Parry. Bob has been with ConsortiumNews for many years. I met him when he was investigating the Iran-Contra affair back in the early 1990s.

DB: Of course, Gary Webb was shredded for the way in which he was able to document the end result of the CIA’s involvement with drug traffickers. For a moment he was lauded, but then he was very quickly run out of the trade.

OS: The Iran-Contra affair is a typical example of this country’s hypocrisy. It was a huge story and what Reagan did was impeachable. The mainstream press didn’t want another shake-up of the government after Nixon. There was never any proper investigation of that mess. When you hear this latest Russian hacking business, it makes you even angrier because the stuff that truly deserves to be is not investigated.

DB: Why did you choose to interview Putin at this time?

OS: While I was in Moscow talking to Edward Snowden a couple years back, I met with Mr. Putin and asked him about Snowden. He was very forthcoming and gave me his very sensible take on the whole affair. I thought it would be a good idea to continue the interviews, though I wasn’t sure he would cooperate. We did a series of four visits over two years, starting in June of 2015 and ending in February 2017. I am sure that if he had not been optimistic about the project he wouldn’t have continued. We would be in Moscow for just two or three days and it was difficult to see him for more than a couple hours at a time.

Of course, at the time, the 2016 election was supposed to be in the bag for Ms. Clinton. We went back in February to interview Putin about the election results, which became notorious. Our intention was to make a profile of a world leader who had been villainized by the United States in an almost cartoon fashion since 2006-2007. The fact that the election blossomed into this huge issue only added fuel to the fire. You’ve seen the criticism of the film in the mass media here.

DB: The corporate mainstream reporting on the Ukraine has been amazing.

OS: It is an historical inaccuracy. If you read the accounts at the time in the Washington Post and the New York Times, there was zero coverage from the other side. Reporters were dismissing these stories as conspiracy theories and this was “on the day of.” It was so evidently a coup, the Europeans knew it. Yet, in the United States, we seemed, as we often do, to be blissfully ignorant of the other side of the story.

We are looking for some justification for restarting the Cold War. It was almost as if we were back to confronting the Soviet Union again. We have been stalking Putin since he starting putting the economy back together again. Around 2004 you start to see the earliest criticism of him as a dictator and an embezzler, and so on.

And talk about meddling in elections, Putin was understated when he said that the United States was all over the Russian election in 2012. We have a clip of [Assistant] Secretary of State Victoria Nuland saying how we were trying to do all this good work in Russia, etc. We were blatantly interfering in their election. In 1996 we completely rigged the election for Yeltsin. He was so unpopular after four years in office that the communists were poised to take back the government. We arranged for him to get a gigantic loan from the IMF, among other things.

DB: What would you say were some of the most surprising moments in the Putin interviews? 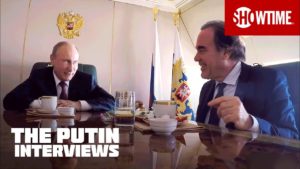 OS: Well, already in the first interview we were discussing the very real threat of nuclear war. I asked about Clinton’s aggressive rhetoric and Putin said, well, we’re used to this from American political candidates. We heard it from Romney back in 2012. I think Putin assumed that Clinton was going to win the election. Trump’s name never came up. You know, Russian diplomats complain that the Americans talk to them like cowboys, like barbarians. From the perspective of other countries, we declare wars in our election campaigns.

Putin talked with me at length about nuclear parity. I don’t think most Americans realize that when Bush abrogated the non-proliferation treaty in 2001 we were removing one of the principal cornerstones of our national security. And then we put the ABM [Anti-Ballistic Missile] in Poland and more recently in Romania.

In 2009 Obama announced that we would be spending trillions of dollars to modernize our nuclear arsenal, and now Trump declares that we are going to win the next war. It is frightening as hell to the Russians. Putin pointed out that they currently have one-tenth of our military budget. All kinds of horrors could be in store if the United States tries to press its advantage with nuclear weapons.

DB: Was it your intention in these interviews to try to humanize Putin, if not for US leaders, at least for the American people? To give them the sense that there is someone we can deal with, who we can step back from the brink with?

OS: I am sure that he was willing to speak to me, to a private citizen, to someone not in a position of political power, because he wanted to send a message to the American people. I am sure he was quite surprised that Showtime picked it up and disseminated it in our country as well as in Europe.

Putin is well aware that the media in this country never really brings across what he is trying to say. I have been very impressed with his speeches. For example, the theme of his 2007 Munich [Security Conference] speech is still very relevant. He saw what was going on in the world, with our invasions of Iraq and Afghanistan. That speech was never really reported here in the United States. It is disgraceful that we cannot take an important foreign leader seriously and report his own words.

DB: It seems this is the way you succeed in US journalism, by bashing so-called enemies as opposed to trying to understand them and articulate their position.

OS: Even in the depths of the Cold War, Khrushchev and later Brezhnev weren’t ridiculed on a personal level to the extent that Putin has been.

DB: Clearly we live in dangerous times, perhaps more dangerous than at the time of Cuban missile crisis.

OS: We’re seeing Europe begin to wake up and realize that NATO is not what it was proposed to be and that the United States is not such a great partner to have. Maybe the US is just interested in Europe as a buffer state between us and them. Maybe Europe is beginning to feel more like a hostage than an ally. If the United States cannot yield its superiority, it is going to be a very rocky road ahead for everyone.